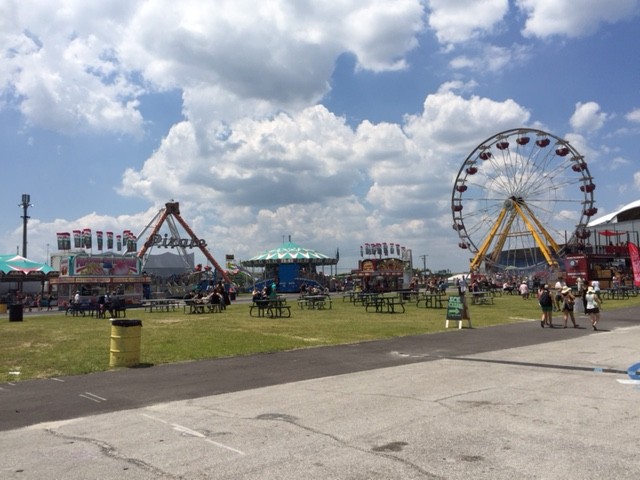 Before I begin, let it be known that I was battling a severe cold during the second day of Big Guava. My overall opinion of the music festival may or may not have been influenced by this. Big Guava with a cold ain’t no joke.

The music on Saturday started around noon but I didn’t quite make it until an hour or so into the festival. On a good day, meaning one where I’m not on the verge of death, I would have tried to make it on time to discover new music from the early bands. Because I was death incarnate, I convinced myself no one was really worth seeing before 5 p.m. I feel ashamed as a music enthusiast that this even crossed my mind but it happened. What can I do now, right?

To kill time as I waited for the bands I really wanted to see, I stupidly decided to get on several of the carnival rides that were spread throughout the fairgrounds. The addition of carnival rides was a nostalgic touch for me, as I haven’t been to a fair in ages. Despite how much fun I had, the rides didn’t really do much for me and failed to instill that sense of adventurous danger I experienced as a kid. I will say I had the most spiritual moment on the Music Express ride as Nine Inch Nails’ “Something I Can Never Have” played in the background. If you know me, NIN is life.

In desperate need of shade after a while of hopping from ride to ride, I somehow made my way indoors to The Nectar Stage. It contrasted the outside festivities with its darkness and much needed cooler temperature. To be honest, I only entered because I was about to faint thanks to my stupid cold. The unbearable heat wasn’t helping either.

However, entering the building was an important step, as it finally got me in front of the first group of the day for me, albeit my least favorite. I sat on the bleachers on the side of the stage just as Run the Jewels was about to begin their set. The hip-hop duo came out explosively with Queen’s “Bohemian Rhapsody” leading up to their start. There were a lot of “fucks” thrown around excessively with rapid, heavy beats that were giving me a headache. It reminded me of a live equivalent of an underground radio station. Miami, you know what I’m talking about. Those staticky gems you come across sometimes where the DJ acts like a hype-man over hip-hop songs and doesn’t hold back with that infamous horn. To each their own but this certainly wasn’t for me. 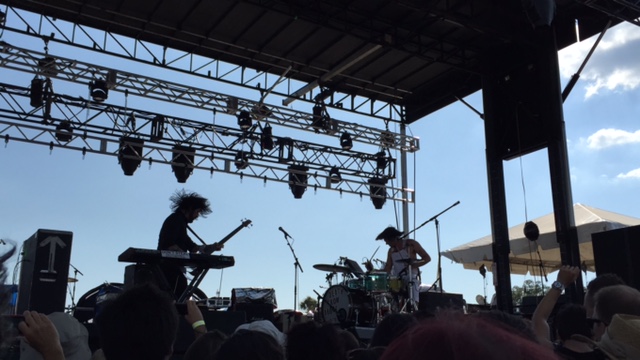 After catching a break, I hauled ass outside to The Grove Stage to catch three acts consecutively. The first was Death From Above 1979. I had a choice between them and Cold War Kids at the Big Guava Stage. Knowing two hit songs over one hit song with Cold War Kids made them the winning band, which I’m very happy about in retrospect.

If music could heal, rock duo DFA proved that it probably can. Their energy was felt in the audience and made things really exciting for the first time in the day. They had such ease on stage despite the occasional drop of the mic stand. I especially enjoyed drummer and singer Sebastien Grainger’s natural banter with the audience in between songs, saying things like he has a broken heart and dick. The most memorable comment was when he asked whether Tampa natives have their city called Tampax like the feminine care brand. He informed us that he once used a maxi pad to stop his foot from bleeding and was then greeted with cheers from the audience when he said such products and birth control should be free. Social commentary in between songs is always fun.

It was only midway through their set that the Canadian duo played their most notable hit (thanks to Major League Baseball 2K7 for me) “Little Girl” from their debut album You’re a Woman, I’m a Machine. Although it was one of two songs I was really looking forward to, it didn’t quite meet my expectations and was shadowed by what was an overall incredible set. With only two albums and having gone through disbandment at one point in their career, DFA still know how to put on a great show.

Up next on the same stage was TV On the Radio. I first heard of TVOTR several years ago when I came across a video on YouTube of them singing “Dreams” with Peter Murphy (Bauhaus) and Trent Reznor (NIN) while on tour. The fact NIN was involved was enough to motivate me to learn more about the band. A few years and three albums later, the most recent being Seeds, I finally had a chance to see them live.

Unfortunately, I started feeling feverish around this point and had to enjoy the music while laying down on the grass. That’s not to say the experience was worse because of this. I normally enjoy looking at the artists on stage and taking in the whole moment but listening to TVOTR while staring at the clear blue sky was absolutely heavenly. There were a few moments where things sounded out of tune (I think this stage as a whole had a few tech issues) but I got two of my favorite songs out of it: “Wolf Like Me” from Return to Cookie Mountain and “Happy Idiot” from Seeds. 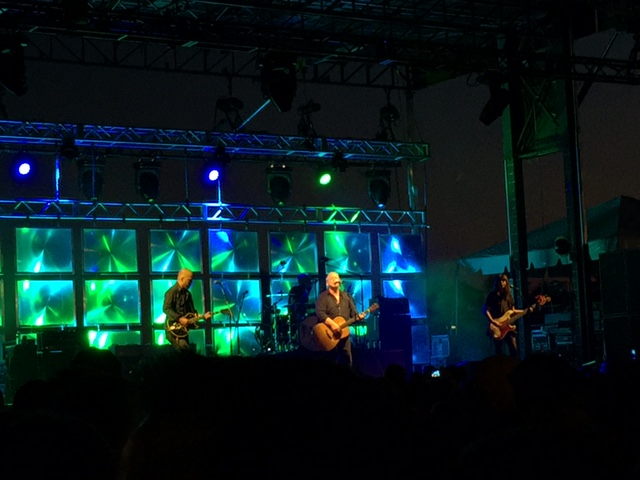 The last band on this stage was probably the act I was most excited to see: The Pixies. You’d think “Where Is My Mind?” was the first song that got me into them but it was actually “Gouge Away” from their 1989 release Doolittle. Much to my surprise, the group started the set with my introductory song. Just like The Strokes and TV On the Radio, The Pixies performed the night before at the Shaky Knees festival in Atlanta. Having them passed around from festival to festival concerned me that we might not get as great of a show.

Fortunately, I was very, very wrong. Hearing favorites like the two previously mentioned as well as “Debaser,” “Wave of Mutilation,” “Velouria,” “Caribou,” and “Tame” had me grinning like a happy idiot throughout the whole set. But nothing made me happier than finally hearing “Hey” live for the first time in my life. Despite having lost most of my voice to this nuisance of a cold, I sang along with a crowd that was just as excited as I was. As much as I envy Atlanta for getting “Cactus” and “Hear Comes Your Man,” there are no complaints on my end. Well, the only slight complaint I have is that they should have played on the main stage but I now realize I wouldn’t have been as close as I was, so I’m ok with how it turned out. 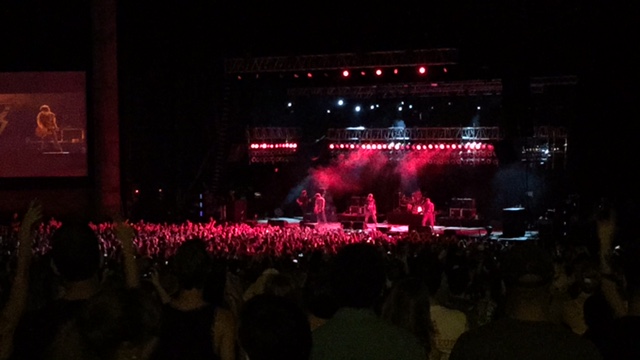 As soon as they were done, the mission was to get to the other side of the fairgrounds to get a decent spot to catch the most anticipated act of the night: The Strokes. I sort of failed but there’s just no way I would get as close as those lucky enough to afford the right tickets. A few minutes after the time displayed on the lineup, the group came on getting right down to the hits by opening with “Reptilia.” This was honestly a bit upsetting for me as I expected it to be a closer but hearing it live first or last is better than not hearing it at all. Things sounded a little muffled towards the beginning from Julian Casablanca’s end, making it a bit hard to understand what he was singing although everyone in the amphitheater including myself knew (most of) the words by heart. There were moments that caught me by surprise, mainly the fact that I momentarily forgot some songs even existed, making it all the more amazing to hear them live. Several hits were played throughout the set, including “Barely Legal,” “Machu Picchu,” “You Only Live Once,” “Heart In a Cage,” “Someday,” “Taken For a Fool,” “Take It Or Leave It” and “Last Nite.” Basically every Strokes fan’s life was made complete.

Besides the music, what made the performance endearing was Casablanca’s adorable awkwardness on stage. The dude is awesome at what he does but he definitely has troubles talking on stage. What I could make from the muffled rambling sounded like he was poking fun at the band’s own music and his tendency to follow the formulaic music heard on the radio in one song.

After the final song,”Last Nite,” the band left the stage but the lights were still off. The well versed crowd knowing exactly what that meant patiently waited and cheered as the group returned for an encore, the first I had seen throughout the day. They left us once and for all after playing “Under Cover of Darkness,” “Is This It,” “Hard to Explain,” and “New York City Cops.”

The masses departed from the amphitheater soon after, passing the brightly lit ferris wheel as we wished Big Guava farewell until next year.

This article is terrible. If you’re going to cover an exciting event then try to find someone who isn’t sick, bitter, and boring.

This really is a terrible review. It’s just a story about her being sick and missing half the performers.

The only thing worse than the words in this “article” are the pictures.