12 Acts Not to Miss at Aura Music & Arts Festival 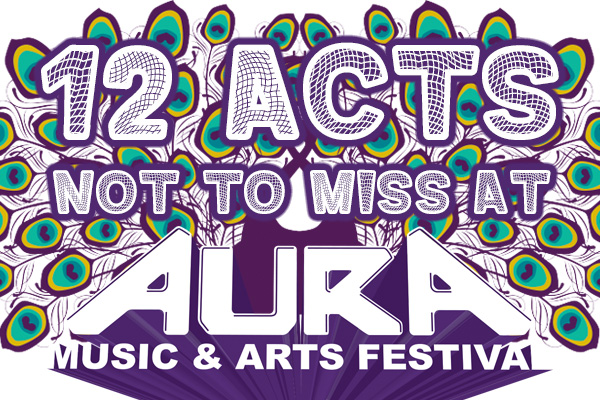 Aura 6 returns next weekend  (March 6-8)  to one of Florida’s most beautiful venues, Spirit of the Suwannee Music Park. This year they have a killer lineup with The Disco Biscuits and Moe. headlining. Here are some of the acts we are most excited about.

Break Science will be taking it up a notch this Aura by featuring more than half of the members of Lettuce.  This is going to be one of the “not to miss” performances of the weekend, and not just because Deitch is a Jedi on the drums or Borahm Lee is a master on keys and producing.   This set will blast off with the already dynamic nature of the Break Science duo by including a complete live band that includes Jesus Coomes, Adam Smifnoff, Ryan Zoids and Eric Bloom. Set time: Sunday 7:30pm on the Amphitheater Stage.

The Main Squeeze is a 5-piece funk band from Chicago.  With songs like “Dr. Funk” and “Ebaneezer”, you might feel like you’re all of a sudden in New Orleans, and if you close your eyes you might even think you’re hearing Usher or Stevie Wonder.  That is simply because Corey Frye’s vocals are seamless and smooth.  This year we will get an extra special treat on Sunday, where they will be doing a 90 minute tribute to Michael Jackson… and if there was ever a band to do that feat justice, I can confidently say it’s The Main Squeeze. Set times: Saturday 6pm on the Porch Stage, and MJ set on Sunday at 4:30pm on the Amphitheater Stage.

This 5-piece downtown soul outfit brings two stepping beats complemented by cut up keys, sexy sax, and groovin’ bass  all  lead by charismatic crooner, Jayjohero. This Miami based group is a self described “Motown/Stax vibe with a 90′s R&B sensibility”, so, get up on your soul train game before you arrive to Suwannee.  Ketchy Shuby’s 75 minute set will take place in the Vibe Tent on Saturday at 3:15pm.

One of the most exciting live acts in the country. Papadosio has continued to grow their audience through heavy improvisation, cutting edge production and an unmatched devotion to consciousness. Complete with visuals and dance breaks that will send you to far reaching places, Papadosio is in in their element at Aura Music Festival. As Aura’s flagship headliner, they have brought their psychedelic dance party the last 5 years.  Do not  miss their sets: Friday at Midnight, and Saturday at 7:30pm, both on the Amphitheater Stage.

Miami’s hottest new horn driven producer/DJ duo is comprised of Travis Acker and Trace Barfield. Bedside not only produces their own tracks and remix some of the hottest new dance songs, Trace Barfield adds some New Orleans flare with his trumpet sounding off over the music. After seeing pretty much every live show they’ve played, I can confidently say that they curate a set that is tailored to your surroundings. Rumor has it they have something special in store for Aura.  Don’t miss this sexy silent disco soiree Saturday 2am at the Vibe Tent.

Funk?  Check.  Jazz?  Check.  Afro-beat?  Check.  Disco?  Check.  An explosive verve to rival that of Jamiroquai?  Double check.  If frontman Jans Ingber can’t get you movin’, then you are a hopeless case and should probably go home.  Join this longtime Colorado band for some boogie Saturday at 4:30pm on the Amphitheater Stage; or the pre-party on Thursday at 9:30.

I once received a text message from a great friend whose musical taste I respect and appreciate because he also understands the greatness of Genesis.  His text told me to go see Tauk at the Funky Biscuit (Boca Raton), that they are “more prog rock than the average jam band, and definitely a little Umphrey’s in them.”  Something else you should know about my friend: he does not lie.  Although fairly new on the scene, Tauk is quickly making a name and place for themselves in our awesome community of music.  You’ll have two chances to find out what everyone’s been Tauk-ing about . Saturday at 11:45pm on the Music Hall Stage, and Sunday at 1:45pm on the Amphitheater Stage.

Born from the B-boy breakbeats, Fusik brings soulful precision to their funk style.  Never one to disappoint, the Florida funk band combines classic cuts with Latin percussion and R&B songwriting. Fusik’s infectious dance music is sure to leave you a sweaty mess so make sure not to miss their afternoon set on Friday. Set time: Friday 2pm on the Amphitheater Stage.

A pickers paradise, this 5-piece band features some of South Florida’s top string instrument players. From bluegrass classics to Irish-folksy vibes, Uproot Hootenanny has that certain string band charm that has all ages tripping the light fantastic.  Along with their own originals, they do some pretty awesome covers that range from the Rolling Stones to Johnny Cash.  With a banjo and a fiddle and a stand up bass, Uproot Hootenanny is just a downright good time. Set time: Sunday 11:45am on the Amphitheater Stage.

Consider the Source is one of the most amazing trios you will ever see. These 3 dudes certainly conjure up the magic with the music sending you to another universe. Their music is somewhere along the lines of jazz, prog rock, and middle eastern vibes, with a technical touch that can only be achieved by a true musician. Music nerds do not miss this set!  Set time: Saturday 2pm on the Amphitheater Stage.

There’s never a dull moment with these guys.  This funk rock fusion super group consists of members from The Breakfast, Deep Banana Blackout, and RAQ (all pretty awesome bands back in the day).  They are self-described “lethal funk”, and have nearly killed me more times than I can count. Their shows are an exploration into deeper realms of intelligent weirdness, and will have you feeling all sorts of funked up.  See them Sunday from 6-7:30 on the Porch Stage.

A staple in the festival scene, the five-piece band is electro-rock with analog synthesizers and heavy bass notes while big guitars create space for shredding within the structure of pure indie rock. Their high-energy dance parties, and quotable lyrics always make for a good time. Don’t miss their set Friday 4:30pm on the Amphitheater Stage.

have you not heard of pigeons playing ping pong? ketch shuby is horrible stage presence when i tried to check them out last year it seems as if the lead guy hadn’t got much sleep the past week and was making a fool out of himself i felt bad for his bands mates.

Good day very cool web site!! Guy .. Excellent .. Superb .. I’ll bookmark your site and take the feeds additionally?I’m satisfied to seek out so many useful information right here within the submit, we want develop more techniques in this regard, thanks for sharing. . . . . .

Leave a Reply to evan