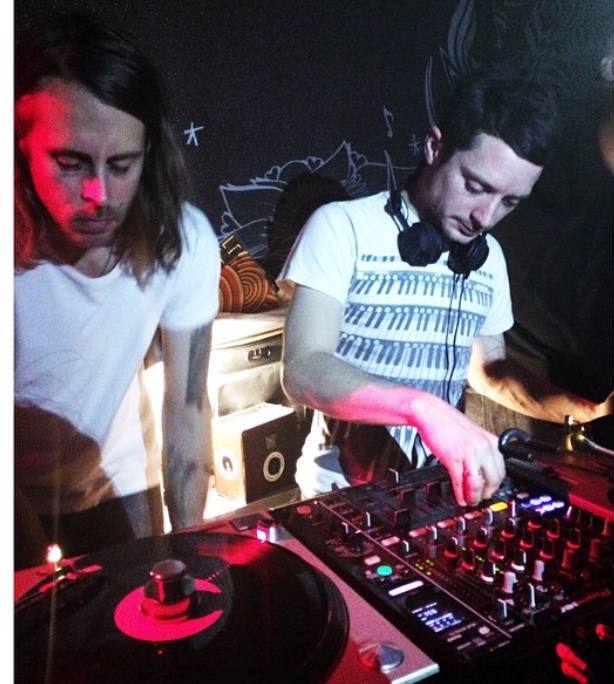 In today’s ever changing entertainment scene its always interesting to see crossovers between actors, musicians, or any other type of artist. But Bardot brought something not many would’ve expected to see this Thursday – a dj set from Elijah Wood and Zach Cowie. They go by ‘Wooden Wisdom’, an obvious, yet clever, cross between Cowie’s internet musical moniker and Elijah’s last time. Whenever I see a crossover like this promoted I typically think to myself, which entertainer needed a bit more bread for the upcoming season? But with that being said, any musical mind should always be about exposure to someone else’s melodic taste.

So there I was, at one of my favorite local spots surrounded by Lord of the Rings fans, occasionally hearing calls for “Frodo!” All I could think was how did it come to this? What was Elijah Wood doing spinning vinyl? And who the hell is this other guy anyways? Beginning around 12:30 and playing until 3, they moved through tons of African and Soul infused tunes. I swear these two must have met in the Zulu section of a record store because they stuck to that vibe all night. Opening with an Antibalas song, progressing into some Paul Simon, then touching on a few more groovy jungle tunes, the floor opened up and these two were clearly having a good time. (not to mention Elijah’s stone-face that seemed to portray a slight lack of consciousness) After spinning the classic, ‘I Zimbra’ by the Talking Heads, with the dude next to me asking what song that was, it was confirmed the majority most likely came to gander at ‘Frodo.’ Myself on the other hand, more entertained by Wilfred than LOTR, was interested to find out if they could follow in suit with the top quality acts that typically spin at Bardot. The rest of the night focused primarily on soul tunes, some of the ones that caught my attention being, ‘Jingo’, ‘You Got What It Takes’, and ‘Time to Move’. The last track, by Carmen, was great to hear since it was the sample used by Nero on their track ‘Must Be The Feeling’.

While I can’t compare their set to those others who have spun from the same position, such as James Murphy or 2manydjs, or even the Holy Ghost duo, it was in its own way unique. The vibe was a bit lighter, the edges a bit rougher, and although Cowie seemed to be calling the shots behind the decks, both took turns cueing up the next track and digging through their selected cases of singles, 45s, and other rare vinyl. All in all I was pleased with their excitement to share some of their favorite tunes as well as their musical depth. Check out some of the tracks played below.

Paul Simon – Diamonds On The Soles Of Her Shoes

Roundtree – Hit On You

Joanne Wilson – Got To Have You

Bobby Thurston – You Got What It Takes

Paul Simon – Late In The Evening

Persnickety All Stars – Caroline Is Strong

Rockets – On the Road Again

William Onyeabor – When The Going Is Smooth & Good