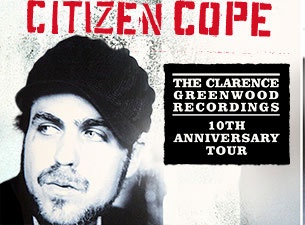 These recordings won’t go away, ’cause they been knockin me sideways…

…for over 10 years that is, to paraphrase Citizen Cope’s most critically acclaimed, oft-covered song “Sideways”.  On Friday October 3, the man born as Clarence Greenwood will make his second tour stop at Ft Lauderale’s Revolution Live.

As the title proclaims, the Clarence Greenwood Recordings 10th Anniversary Tour will surely include this undeniably evocative track as well as every one of this album’s cuts.  The significance of Cope’s sophmore composition cannot be understood without recognizing how extensively the components have been featured in all manner of video media.  From TV commercials to feature films, practically every soulful song has shined as a soundtrack.  And it’s no surprise really.  The most prolific “Son’s Gonna Rise” and “Bullet and a Target” conjure plentiful lyrical imagery weaved from within the minds-eye of this southern-urban singer-songwriter.  His stories are delivered in a style both modern and folkish.

Citizen Cope is no stranger to venues in South Florida, having performed almost annually.  He played Revolution most recently in 2012 and in other years at the smaller, nearby Culture Room.  As I recall, CR shows sold-out with the most distant leaving me out in the rain.  The 2011 set became an intimate sing along that carried a Clarence-at-a-campfire authenticity as if Tom Joad were backing his subdued angst against classism.  For this 2014 tour, a portion of the proceeds from ticket sales will support underpriveleged children by musical instrument enrichment through Turnaround Arts .