Review: Papadosio at The Culture Room 9/12 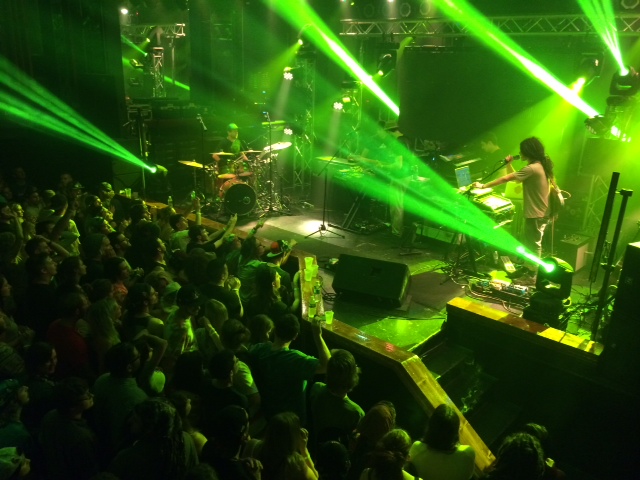 Last night at the Culture Room welcomed two live acts that call their current home Asheville, NC, Papadosio and Asian Teach Factory. With Papadosio to begin later, Asian Teacher Factory (ATF from now on) opened with a great hour plus of some spacey psychedelic rock. ATF, featuring Papadosio bassist Rob McConnell, did well in showcasing their abilities as a complete band and not just another group able to ‘jam’. Many of their songs seemed very full to show each member’s skill, including the drummer taking part in some almost joking cymbal stops. The guitar work from Alfonso Graceffo was on a high level and impressive all night. The member of ATF, who looks like 70′s Garcia, also enjoyed a bit of a homecoming having used to attend shows at this venue growing up. The bluesy breaks and jazz infused keys of this group, going along with the spacey bridges that transitioned, made for a perfect opener for the night’s main act.

Papadosio began just before 10:30 and played a ten song set ranging across much of their work. I am always intrigued to see this group, as they are known to put on a good live performance. Their setup is very full with two keyboardist, brothers in fact, a bassist, lead guitar, and drums with many members also providing singing. Although singer-songwriter Anthony Thogmartin leads this 5 piece, handling much of the lyrics and additional launch pad work, it is truly a collaborative effort that makes their progressive sound a thing to enjoy. This band has a strong hold on bringing their sound in and out of consciousness, sometimes taking audience members with it, but their ability to provide thorough solos as well as bring songs down to an ambient state, matched with some great lighting, is a formula for an awesome live show. These aesthetics come out in nearly each of their grooves.

Beginning with ‘The Lack of Everything’ from their studio album Observations, the tone was set for the earthly sounding group to take everyone along their journey for the night. From there the group went into the bass driven intro of the song ‘Right Now’ from To End The Illusion of Separation, the 2012 follow up album to Observations. This song continued on to flow into ‘Snorkel’, which featured Alfonso from the opener ATF, joining in and playing a long guitar jam. After that the set continued on to another TETIOS song, ‘The Bionic Man Meets His Past..’ that has a blooming hook sound, and goes into an electronic breakdown letting the fans out smooth. The band then strolled into a funky jam called ‘New Love’ from the just released live album, Night and Day. This tropical sounding, long groove is a strong one and perfect in the middle of the set. Following came the lyrical and spacey TETIOS song, ‘The Oracle Theme’. They stretched out this song with a jam that into an older, more organic sounding track, ‘Utopiate’ off of the 2007 EP Magreenery. Up next came another single from Night and Day, called ‘Taking Turns’. This features a heavy guitar riff and another relieving lyrical chorus, before venturing into some good keyboard breaks and a solo from Anthony. Lastly came the surf rock sounding infused crowd favorite ‘Cue’. This song is a full feature for Papadosio, and being live they are able build and expand on this track showing their great ability. Unfortunately this is where the set ended, but after much cheering the band was back to perform an encore with the song ‘Geoglyph’. This is a funky, jazz sounding track and a live favorite the band likes to pull out.

As expected, Papadosio did not disappoint and performed to a crowd that shared high energy all night. Although ending a bit earlier than expected, and many thinking there would be a second set rather than an encore, the audience left more than pleased as the set was a very diverse offering and played flawlessly.

5 Responses to “Review: Papadosio at The Culture Room 9/12”

Leave a Reply to Papadosio is coming to Cincinnati on Friday, November 27 | Cincy Groove