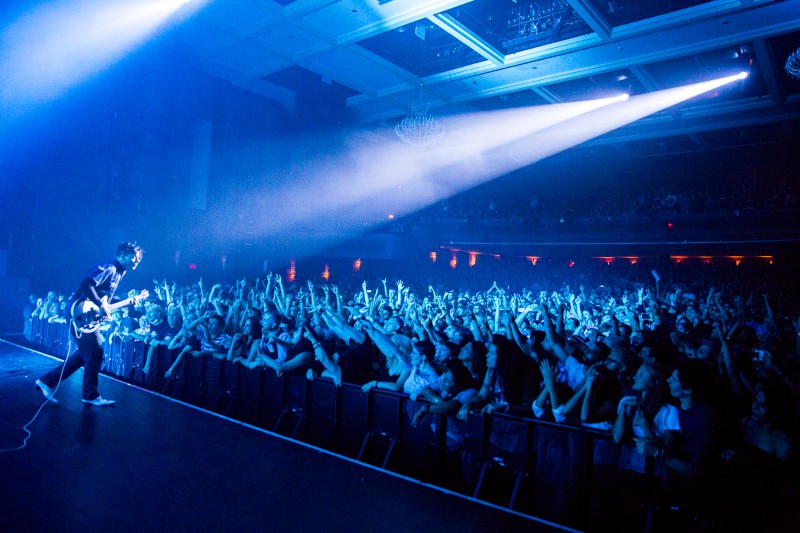 After last night’s events, I can now proudly say I have seen Jack White live in concert. It wasn’t Jack White as The White Stripes, as The Raconteurs or even as The Dead Weather. But I learned last night that a show put on by Jack White alone undoubtedly holds its own.

Doors opened at 7p.m. to a line of fans on the sidewalk that extended around The Fillmore. As soon as we were allowed in, I made my way to the pit and luckily found a spot closer to the stage than I ever would have imagined possible.

As we waited for the opening act to start, we were greeted with a fine selection of hip-hop in the background such as Big L and Notorious B.I.G. Usually, the music chosen before a show reflects the taste of the artist, so it was interesting to hear and definitely enjoyed by this one right here.

Olivia Jean of The Black Belles who is now touring solo alongside White came on as the opening act at around 8p.m. Jean was backed up by a fully male band, which was a change for once, as The Black Belles is an all-girl band that she also fronts.

From what I’ve heard from her previous work with The Black Belles, the sound hasn’t changed much although distinctive enough to consider this solo project deserving of interest. The similarity is mainly due to the guitar riffs, a sound clearly shaped and influenced by White’s guitar playing as she plays under his label Third Man Records.

Jean played to a seemingly detached crowd, singing about tainted love and foolish girls chasing after men. It certainly wasn’t the energy White was greeted with, reasonably, but she still deserved a lot more from the crowd. You could tell she was a little dispirited by it all when she announced her final two songs. It was somewhat hard for her to fully captivate the audience, which unfortunately took a bit away from her charm despite the wonderful performance. 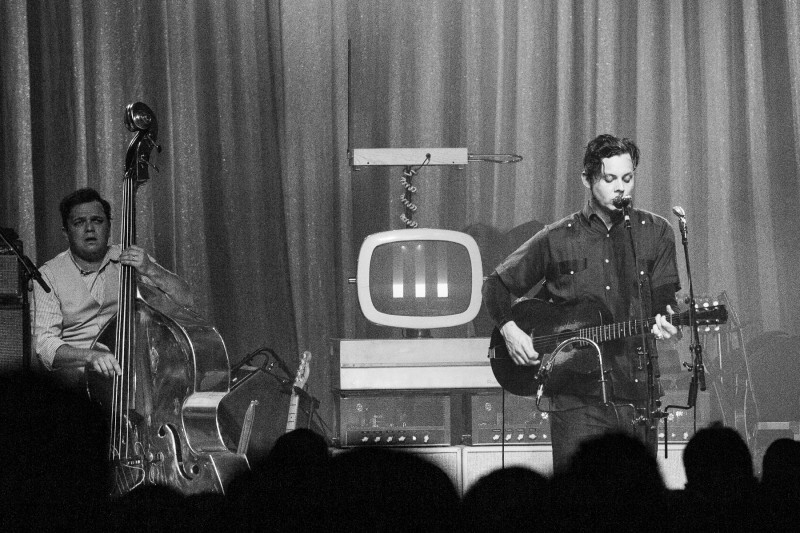 Jack White followed soon after but not before an announcer stood in front of the baby blue curtain requesting that everyone live in the moment and put away the phones for the night. Thankfully, I noticed that those with me in the pit followed this request, with the exception of a few. It wasn’t your usual overwhelming wave of cellphone screens, though, so it was finally a bearable experience for once.

White came out with an explosive intro, starting off the set with the exceptional instrumental track “Highball Stepper” from his recent solo release Lazaretto. It was a way of showing off his raw and crunchy manipulation of pitch on his guitar, a sound he is notably known for from throughout his music career. 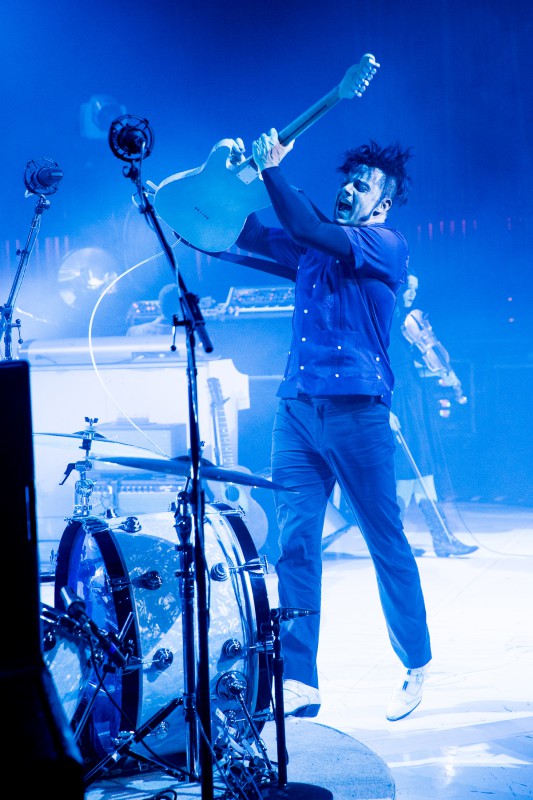 “Lazaretto” followed after, it being the first time the audience heard anything from White since the show started. He was generally quiet at first with a tense expression, perhaps assessing the crowd or too into the music to even bother with us. This thankfully changed later on throughout the performance, him even vocalizing that he wished he could slow dance with all of us.

Although this was Jack White on his own with his touring band, the performance itself was a showcase of all the work he has ever done, songs from the White Stripes era being the most played of the night. Tracks from his work with The Dead Weather and The Raconteurs even made an appearance but there was nothing like his solo material and this touring band’s take on the White Stripes songs, specifically the much loved “We’re Going to Be Friends.” It was given an unusual update, as it followed the Americana style of music that can be heard in his solo material. This didn’t stop fans from recognizing the track and singing along. 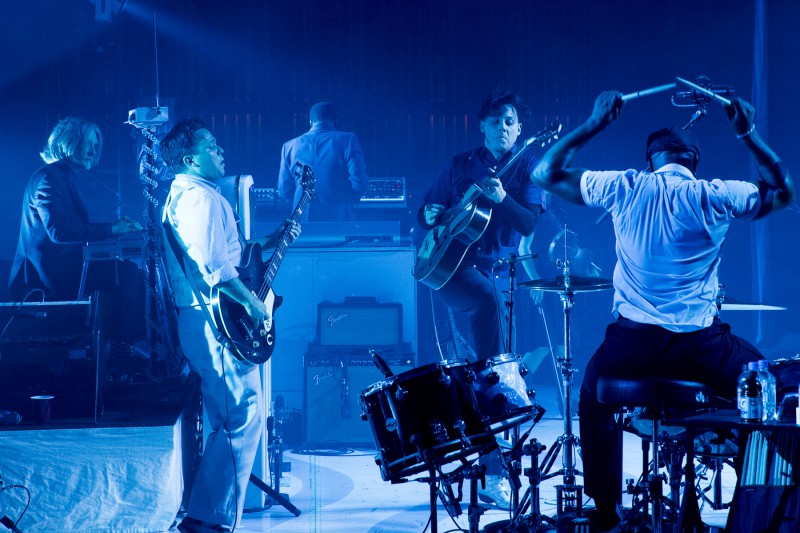 Of the instruments on stage, fiddlers, an organ, an upright bass and a theremin were present besides your usual drum and guitars. Influenced by the Americana style of music that can be heard in his solo material, the instrumentation on stage gave way to really interesting breakdowns of the songs. This was especially the case with “Weep Themselves to Sleep” off of Blunderbuss. White introduced each musician at one point, allowing each of them to briefly showcase their talent on their respective instruments.

White and the touring band left the crowd twice throughout the night, both false conclusions to the night that nobody ever fell for. The first encore started abruptly and fast paced with “Fell In Love With a Girl” and was slowly brought down with Hank Williams’ “You Know That I Know” and “We’re Going to be Friends.” The former saw White speaking to the audience intimately, as previously mentioned. 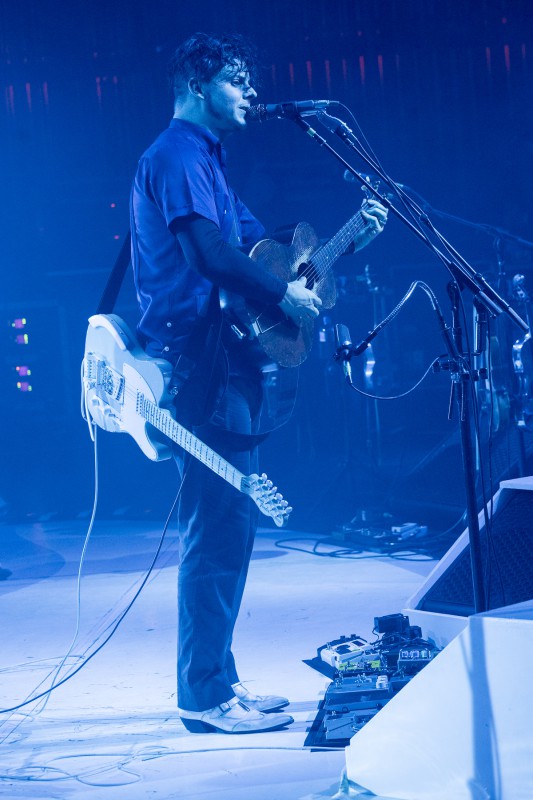 The second and final encore was prompted by the masses chanting the infamous riff of “Seven Nation Army” off of The White Stripes’ Elephant release. Instead of immediately giving them what they wanted, White and the touring band kicked off the final encore with “Icky Thump,” with an exceptional solo from White midway through.

As is the natural order of things, the city most notably associated with “Seven Nation Army” these days got to experience it live as the closing song of the night. The crowd hopped and sang word for word with White, wrapping things up beautifully for the night.

I Think I Smell a Rat (White Stripes)

Weep Themselves to Sleep

Fell In Love With a Girl (White Stripes)

You Know that I Know (Hank Williams Cover)