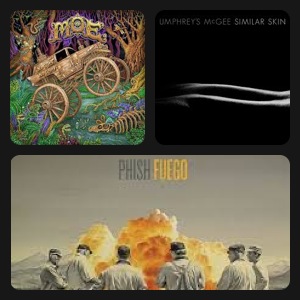 Most of the summertime attention in the jam band scene is usually reserved for the run of festivals of which  famed bands perform. However the summer of 2014 had a bit of a different twist with jam titans Moe., Umphrey’s Mcgee, and Phish each releasing a full-length LP album for their fans to enjoy. I will breakdown each of these records based on criteria such as studio vs. live feel and analyze the instrumentation in an attempt to guide listeners towards which album they would enjoy most.

The first jam album to drop over summer was Moe.’s No Guts, No Glory (Sugar Hill records) on May 27th. This is the eleventh album from the group that has been together for twenty-five years. It is clear from the first track that the bands vast experience led to preparedness, professionalism, and ease in the recording studio. Interestingly enough, the album was originally slated to be a ‘roots rock’ production with a heavy 60’s/70’s approach and recorded on a 2” tape. But several roadblocks hit and the band decided to switch to a digitally recorded record with more of a ‘Moe. feel’, and we are sure happy they did. No Guts, No Glory was mixed by hip-hop producer Dave Aron (2Pac, Prince, Snoop Dogg) and he gives the album a very clean feel that is truly representative of the live Moe. experience. Its strengths are group instrumental interplay which is a conflux of progressive structure and experimental improvisation creating an extraordinary organic feel for the listener. This album also has the strongest lyrical prowess of all the Jam albums which gives it the ability to penetrate beyond an exclusive jam audience, produces complex yet melodic songs as opposed to riffs with words. Overall, it is safe to say this is an eclectic rock album which blends overt 60’s and 70’s influence with the patent Moe. sound that fans adore. With regards to particular tracks, No Guts, No Glory has more than a few standouts. The first song “Annihilation Blues” is a deep Dylanesque bluesy track that feature nihilistic and near apocalyptic lyrics fueled particularly by a powerful bass line that sets the tone for what’s to come. Next is “White Lightning Tupentine” which shows of Moe.’s progressive prowess. It begins with a slow acoustic twangy vibe complimented by the precision and unique sound of a xylophone before exploding to a slide guitar driven solo that is uplifting to witness live. The next notable track is the emotional core most fun on the album called “Same old Story”. It has a surf rock vibe that utilizes the vibraphone and piercing political lyrics. The next “Silver Sun” is the most musically complex and longest clocking in at just under ten minutes. This track utilizes a heavy Pink Floyd vibe with dueling guitars that was unquestionably inspired  by “psychedelic ballroom rock’ of the early 70’s combined with heavily filtered vocal reminiscent of John Lennon on “Tomorrow Never Knows”. From there the album shifts into a series of light ditties highlighted by “Blonde Hair Blue Eyes” about the bass player Rob’s daughter (with a fantastic music video accompanying) before concluding with longtime live track “Billy Goat” featuring the famous refrain “Nothing can hold this final refrain from being untold”. It is entirely possible to imagine yourself vibin’ to this album on the beach with a couple beers as you soak up the summer sun. On June 10th, Umphrey’s Mcgee unleashed their album Similar Skin (MRI). This album is a tour-de-force of hard rock that cannot be classified as merely a jam or funky dance album. This is more a hard rock/progressive statement that screams in the loudest possible voice “Rock-n-Roll Is NOT DEAD!” This album is not for the shy, but rather produced by rock fans for rock fans. It will appeal most to your inner-musician as you seek out Umphrey’s numerous 80’s influences from Metallica to Frank Zappa to Rush to Jaco Pastorius.  Jordan Blum of Popmatters.com characterizes their style as a marriage of elements between the “melodicism” of the Beatles, “symphonic prog” of Yes and “heavy metal thunder” of Led Zeppelin. The element that stands out most on the record is its technical mastery of guitar work, including that intense Zappa like interplay though it is obvious the album has been trimmed of fat compared to the five-course meal one experiences at a live show.  On the other hand the songwriting and lyrics can best be described as forgettable compared to the complex sonic intensity that persists throughout. The thesis of the album is to prove that Umphrey’s Mcgee comes from ‘similar skin’ of other relevant rock acts. The case gets off to a strong start with debut track “The Linear”.  This track features a steadily rising intensity and plenty of space for lead guitarist Jake Cinniger to blaze to the finish with a frantic solo. The vibe continues to assault your ears until the track “No Diablo” lightens the journey.  It can be classified as progressive keys driven pop with tongue-in-cheek introspective lyrics about the nature of the afterlife. Many have scorned this track as ‘out of place’ and ‘diversity for diversity sake’, but I think it serves to prove the bands eclecticness and provide a form of comic relief from the otherwise intense proceedings. Another standout track is “Puppet String”, which is a live standard that is given proper treatment on the album and teases the listener to want to hear a lengthier version in person.  The final song “Bridgeless” is an unpredictable roller coaster ride, and at nine minutes the longest on the album.  It is a challenging composition with a constantly changing tempo that culminates in an epic guitar duel between Cinninger and lead man Brendan Bayliss which serves as the climax for this undeniable rock masterpiece. Last but not least, Phish released their first album in five years entitled Fuego. The album has been a major divider for the community, as people either love it or detest it.  Phish premiered the album in full at a show last Halloween, where it received mixed reactions from fans. It features a diverse array of tracks from funk to pop whilst maintaining the patented phish sound.  The writing for the album was done collaboratively and it really seems like the whole band was on the same page. Production wise, every track is crisp with a clear defined sound that is aesthetically pleasing. Upon first listen, songwriting sounded corny and contrived. However, upon subsequent listens I realized the positive nature of the lyrics makes the album feel genuine. After the troubles plaguing the band in recent years, the fact this album was even made is a triumph. This should be viewed as a celebration that Phish is back on the same page and still delivering fuego! Not surprisingly, the album kicks off with an epic song entitled “Fuego”. This is the records high point with hilarious lyrics and gospel funk interplay between Page McConnell (Keys) and Trey Anastasio (Guitar).  Furthermore, uplifting track ‘Devotion to a Dream” delivers positive vibrations mixed with a truthful look at the bands previous struggles and getting back to where they are today.  Another standout is “555” which is arguably the funkiest track and the horns sections add to the punch.  All in all, as much as I try to breakdown and analyze the influences on the Moe. and Umphrey’s albums, for Phish I was forced to just sit back and appreciate this album in its own right.  I will certainly agree this rendition does not come close to previous classics like Story of the Ghost, but it appears like Phish is a real band again and genuinely having fun making music. Heading Fuego is like watching Michael Jordan play on the Wizards, you know you’re witnessing a legend but it’s not quite what it used to be.

In conclusion, all three albums are superb in their own right but if you really want to get the full experience of these bands you must make an effort to see them live!

Listen to all the albums here