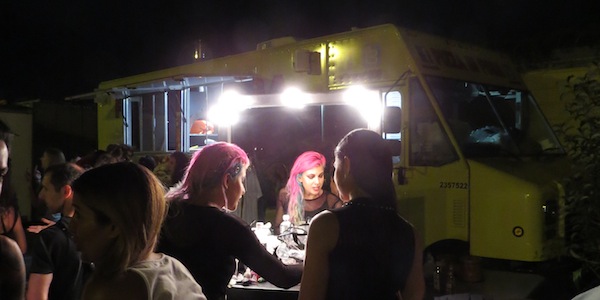 Ready to #SeizeTheNight I ventured into the less desirable section of Wynwood to find the Toejam Backlot. As I enter the backlot itself I found myself smack in the middle of the revolution surrounded by face painted gypsies, hipsters in their black skinny jeans getting temporary tattoos, mohawk clad punks, and what is a Wynwood party without those girls who decided to wear their party dresses and heels attempting to traverse the gravel lot. Desperados sought to bring the revolution to Wynwood and they did just that with hip-hop music from some of Miami’s top DJs pulsating through the party as the Punk Rock vendors hand screen printed fresh T’s, shaved free punk rock haircuts into patron’s heads, and custom sprayed trucker hats for those brave enough to drop a freestyle. Next thing I know I am holding a cold Desperados with a shot of Tabasco in it and I knew the revolution had begun.

With beer in hand I headed over to the stage just as YACHT started warming up the crowd. Their infectious indie rock driven by raw disco beats echoed through the Detroit style warehouse decked out like a carnival sideshow. The makeshift venue hosted a large built in stage, laser lights mounted throughout, and a projection screen armed by the TM Sisters featuring out of this world visuals that cut across the faces of the band members. Oh, and of course a disco ball, what is a dance party without a disco ball! YACHT really loves Miami and they made this clear by bringing the party to the Toejam Lot, constantly jumping into the audience as the fans shouted, fists in the air, “The Earth is on Fire.” Co-lead singer Claire L. Evans was sporting a stylish blue pant suit accompanied only by an Umbro sports bra as she led the crowd favorite “Psychic City.” After some fun with the cryo machine, which at the touch of the button would leave the crowd in a whiteout of cool mist, YACHT finished their set with their most upbeat and current single “Utopia”, a song sure to occupy your brain far after the song is finished. 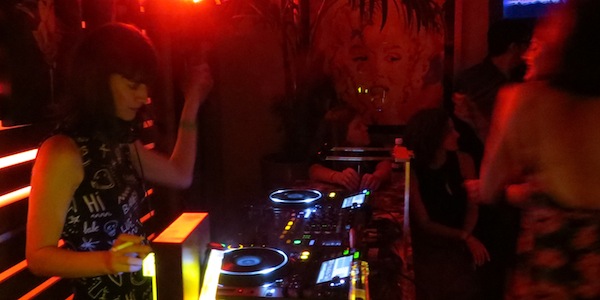 It was time to explore so I headed into the Sexual Revolution Room. This smaller but air conditioned back room had a parashoot ceiling with one wall covered in large combat style automatic rifles and the adjacent wall depicting scantily clad women exposing their breasts as large bearded men deviously positioned themselves behind them. One photo tied the theme together as a woman wearing mesh lingerie held an automatic weapon toward the sky like a recently freed warlord. With a striper pole as the centerpiece, this room was the perfect setting for a night of debaucherous sexual experimentation. A cast of all female DJs, led by Ess + Emm, kept people’s feet moving with their deep but poppy dance music that boomed from the speakers positioned around the room. 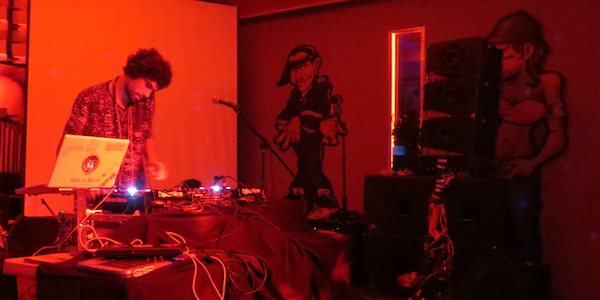 After leaving what could be described as a sex dungeon, I headed back out into the main room pleasantly surprised by Jeremy Ismael’s funky dance party. Blending funk guitar, bass, and horn stabs transitioned by sweeping white noise and house beats with heavy percussion; Jeremy created a vibe that got the disco ball spinning. As the ladies slid across the dance floor to the bouncing bass drum, the warehouse air cleared to expose a laid back vibe so unique to Wynwood, a refreshing departure from the mega clubs of the beach and the sorority girls night out synonymous with Brickell. This was the gritty but hip atmosphere that attract the alternatives, the counter cultures, and the artists that make Miami once again feel like a relevant cultural destination on a global scale. 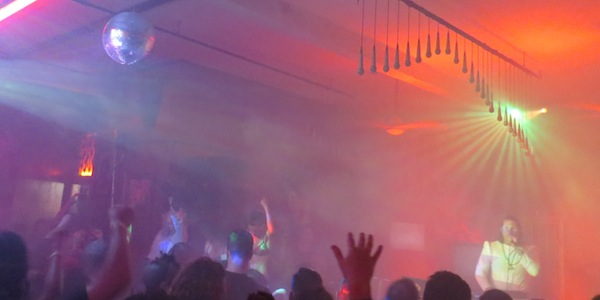 An experience hard to fully grasp with words, Otto Von Schirach embodies much of what makes Miami unique since the 90′s to today. The barrage of bass drops, Spanglish raps, and constant encouragement to bounce that booty brings me back to my middle school and high school days, bumping and grinding in a way that seems much more innocent then the ass up twerking of today. This Latin booty dancehall bass music was enhanced by the nonstop stimulation of strobing LEDs, spiraling projections, and Cryo whiteouts cut by circling lasers. The electro driven beats were accompanied by strange animal samples, whistles, video game soundboards, and other noises only to be upstaged in weirdness by Otto’s white haired, troll faced sidekick who raged that stage arms flailing, continuously jumping into the crowd to hype the front row with a makeshift ray gun constructed from an old Keytar. Both decked out in white futuristic jumpsuits, this spectacle was not to be missed. All in all Desperados’ #SeizeTheNight brought together much of what Miami has been and what Miami is growing into. Like Desperados itself #SeizeTheNight provided an authentic hip but laidback vibe with an accent of the wild and extravagant winning me over to join the revolution. 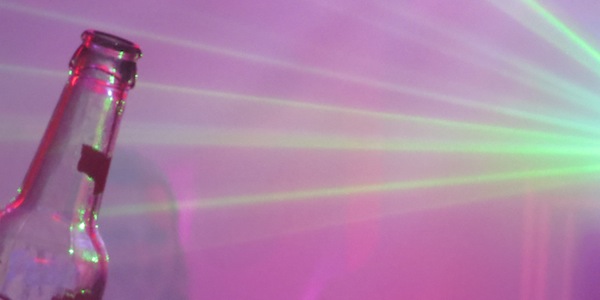