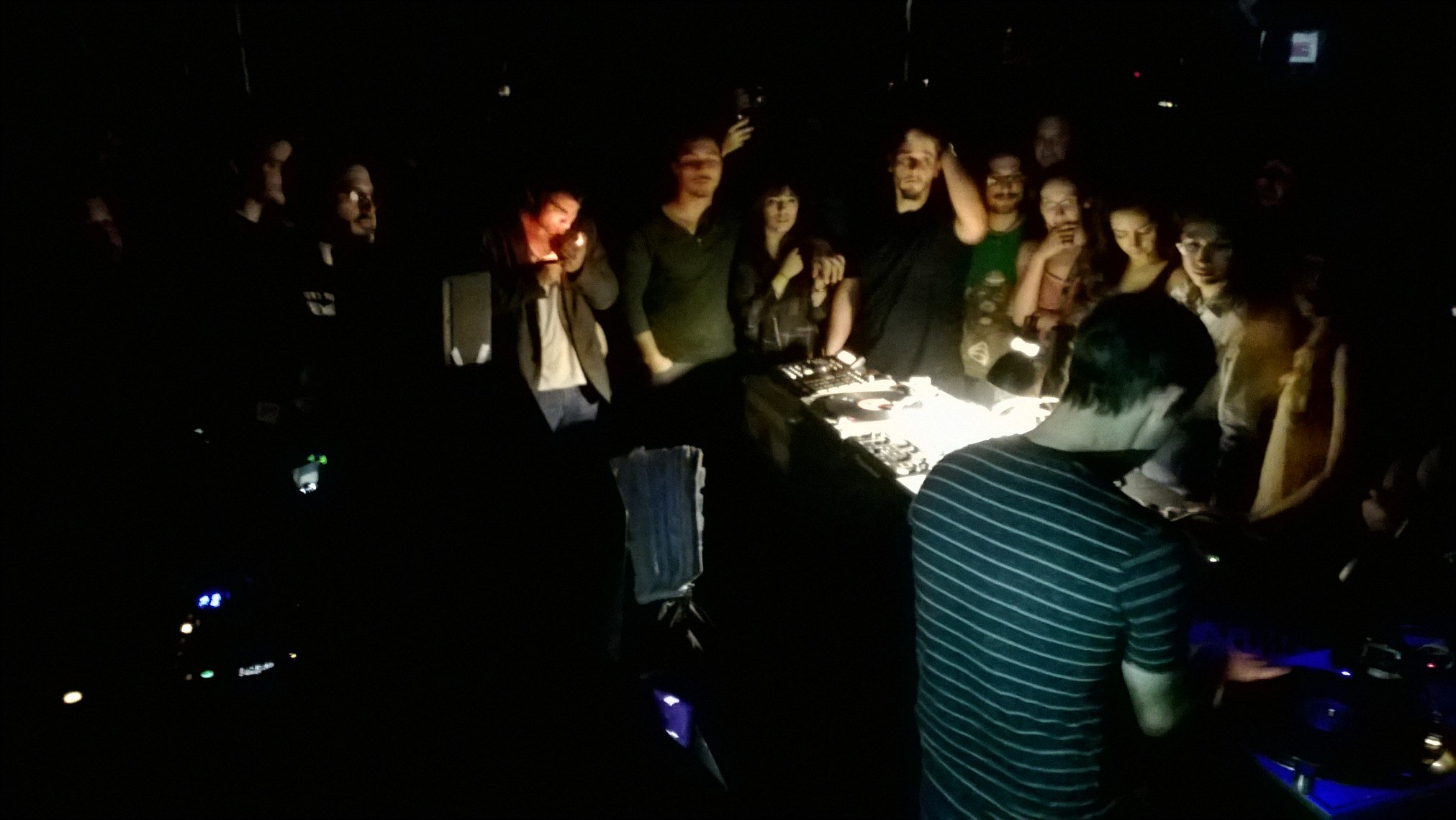 It took exactly one listen to Deadringer by RJD2 (aka “RJ” Krohn) to make a fan out of my young teenage self. The Philly producer’s first full length was everything I loved about sampled music. It became a staple of those years and as his career extended, I followed the growth into new projects and sounds. He’s been a vital player in the soundtrack to my life and after seeing him once long ago at the now-defunct Langerado festival, I got to experience a brush with genius once more at Bardot.

Performing during Miami’s Art Basel festivities , the show was one of many musical acts taking place that week. But it was the one that put the sparkle in my eye and made me feel seventeen again.
The room was dark and the music was loud upon entering Bardot at 12:45am. It was packed with fellas looking like DJs, and ladies looking like DJs’ girlfriends. It was pure Miami. 1am hit, and the opening chords of the Beastie Boys’ “Sabotage” came on the speakers. It oddly decreased in volume, and then was overtaken by beats too weird to be normal Miami fare, with some MC’ing over it. I wasn’t sure  if this was his intro music but apparently it was…maybe.
The crowd around the performance area was so dense, I couldn’t make out if there was someone actually rapping or if it was from a recording, but it became extremely clear as the music got weirder and more experimental that RJD2 had started his set – and I didn’t even realize it! The tunes sounded unfamiliar but I chalked that up to his extensive discography. This was it.
He seamlessly wove himself into the house mix and started taking over. Eventually I was able to wriggle myself through to see Mr. Krohn up close. And there he was doing his thing. In front of him was a long table with 4 turntables and countless drum machines, samplers, keyboards, and other electronics spread out along it. Behind him were even more electronic goodies.

It was hypnotizing to watch him fly from machine to machine, turning on table lamps to see as quickly as he hit his keys or scratched records. He was constantly on the move. The way he played the machines as instruments – tapping away at the drum machines, plunking on the keyboards, scratching – was unlike anything I’ve seen before. Each song kept transforming into something entirely new as he turned his whole set into a virtual electronic jam session based on some of his strongest material. He mixed in beats and sounds that made the songs kick 100 times harder than the originals. About 5 minutes into the set he started rocking old favorites… even as just a tease in some cases (for example freaking me out to no end with the intro to one of my favorites, “Someone’s Second Kiss”).

The set was heavy on classics from his first two full lengths. The ghostly “Chicken-Bone Circuit” was perfect with closed eyes, “Exotic Talk” brought some rock into the set, he turned “Smoke and Mirrors” into an almost entirely different song with his expert performance of all the previously mentioned gadgets, and when “The Horror” came on everyone started bouncing. Someone leaned into me and said something like, “You know people are loving a song, when everyone takes their cell phones out.”And sure enough, everyone was not only bumping but trying to catch the moment on digital video as well.
If putting on headphones, closing your eyes, and listening to RJD2′s music is like entering an underground ’70s movie theater, then seeing him live is like making that IMAX. The volume this time around was way louder than Langerado, and the bass was better represented. The whole thing enveloped the audience and took control of the atmosphere with classy, musical ease.

It was so incredibly fun to listen to, that the bi-sexual almost-striptease twerk-fest happening right next to me went almost completely unnoticed. No one seemed to care. They were too lost in the music and the fun of the moment. RJD2 also seemed to be having fun, especially with the floor setup. Later in the set he said to great applause, “This is my favorite fuckin’ environment. There’s nothing between us.”