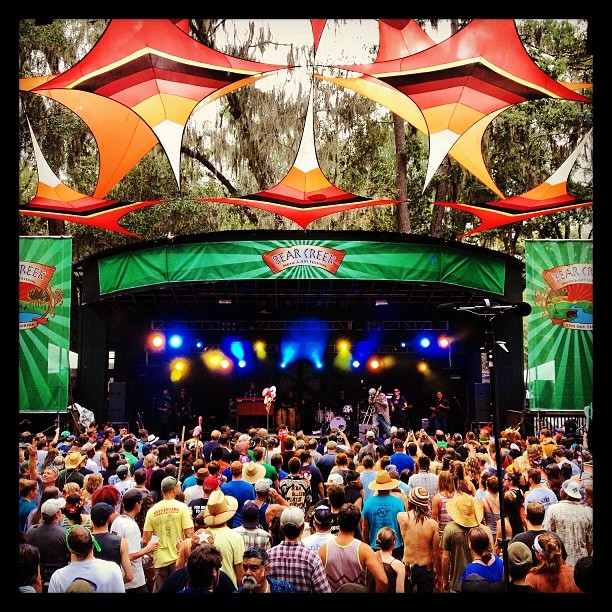 To say that the 2013 installment of The Bear Creek Music & Art Festival was a dance party would be a huge understatement. Held annually in the usually chilly month of November in Live Oak, Florida at the Spirit of the Suwannee Music Park, Bear Creek Music Festival provided it’s patrons with a weekend of uber funk from some of the newer bands on the scene – Space Capone, Monophonics, Kung Fu, Flow Tribe, Nth Power, The Motet, and The Revivalists, as well as many of the long time staples of the funk & jam scene including The New Mastersounds, Karl Denson’s Tiny Universe and Galactic. Highlighted by “The Funkiest Saturday of the Year” headliners The Roots, Bootsy Collins and The Funky Unity Band and The Bear Creek Allstars featuring members of Dumpstaphunk and Lettuce did not fail to impress. Bear Creek also featured diverse acts such as Toubab Krewe, Dopapod, Bonobo and Afro-Beat standouts Antibalas. Guest appearances were also quite popular this past weekend with roaming artists like Miami’s own Roosevelt Collier, Joey Porter and quite possibly the best drummer on planet Funk, Nikki Glaspie, sitting in where and whenever possible.Mastermind Paul Levine and his staff at Bear Creek really outdid themselves this year. Fabulous weather was abound, regardless of some drizzle on Friday, and the funksters who are normally adorned in heavy weather winter gear were provided the opportunity to rage in their shorts and t-shirts as if it were Jazz Fest in April.

Of course our good friends at CHeeSeHeaDPRoDuCTioNS were there to capture many of the highlight moments from what many regard as the Funkiest Festival of the Year. Enjoy this comprehensive 3+ hour highlight reel, and check back often as full sets are currently being edited and uploaded.