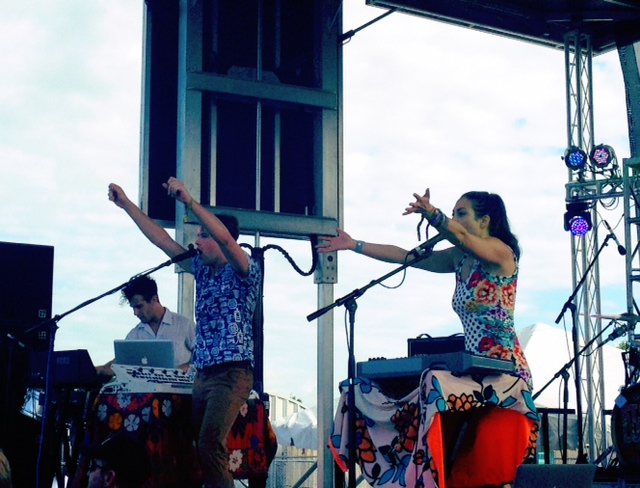 I kicked off my Coastline experience with St. Lucia, one of my “most looking forward to see” bands.  They did not disappoint.  Jean-Philip Grobler is the musical genius behind St. Lucia, while he has a touring live band, this time including four others in his stage presence.  Their mix of 80’s inspired synth-dream-pop and island vibe had the crowd captivated and dancing in the hot sun.  Grobler’s vocals were impressively intact throughout the entire performance, which was refreshing to see because you never know how indie bands are going to transfer from the recording studio to the stage.  A lot of the music was reminiscent of M83, but still maintained its own identity so as not to be considered a “ripoff”.

The clouds parted, giving way to a beautiful day at the Cruzan Amphitheater on Sunday for day 2 of Coastline Music Festival.  The tagline for the festival was “A Musiculinary Experience”, with food trucks bordering the second stage area, and a long line of craft beer tents indigenous to Florida breweries.  With music, food, and art vendors galore, Coastline Festival left little to be desired. 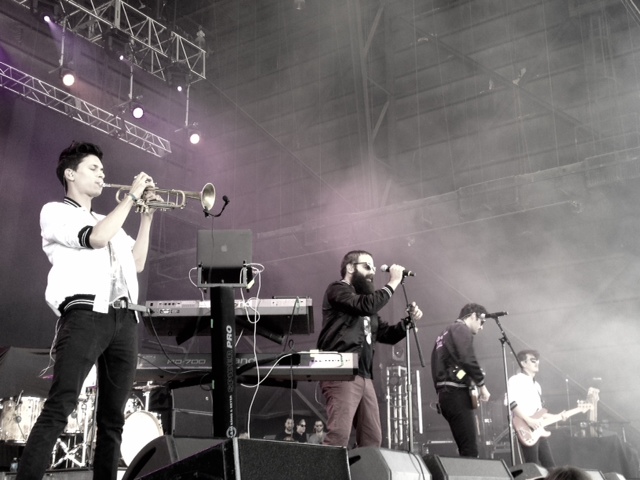 Coastline was set up between two stages; the main stage at Cruzan, and a smaller 2nd.  On the main stage, Capital Cities took over at 3pm and absolutely captivated the crowd.  Looking like a pack of T-Birds out of Grease, they brought great energy with their hits “Kangaroo Court”, “Farah Fawcett Hair” and their Bee Gee’s cover of “Stayin’ Alive” which ended with Weezer’s “Undone – The Sweater Song”.  They closed their set with a high energy rendition of their number 1 hit “Safe and Sound” which had the whole crowd psyched up. 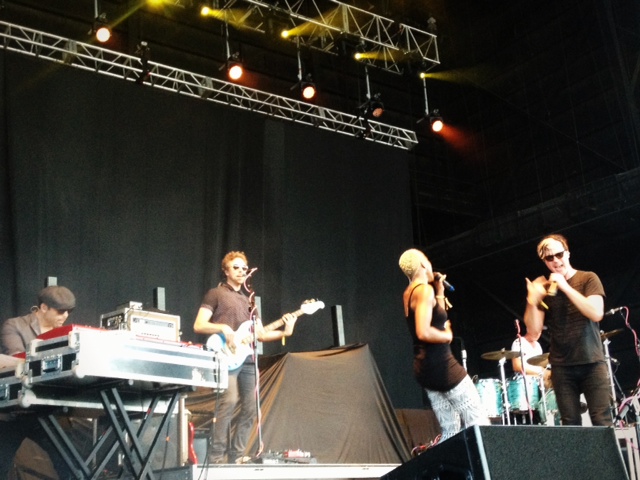 Fitz and the Tantrums

Next up on the main stage was Fitz and the Tantrums, who delivered a good show as well.  I was surprised to see so many people in the audience who seemed to know and sing along to their tunes, but that made it all the more fun.  With horns, tambourines, and that old school soul, it’s hard not to see that Fitz and the Tantrums is music for all ages and all people.  They did a fun cover of the Eurythmics “Sweet Dreams”, and were sure to include their heavy hitters “Moneygrabber” and “The Walker”. 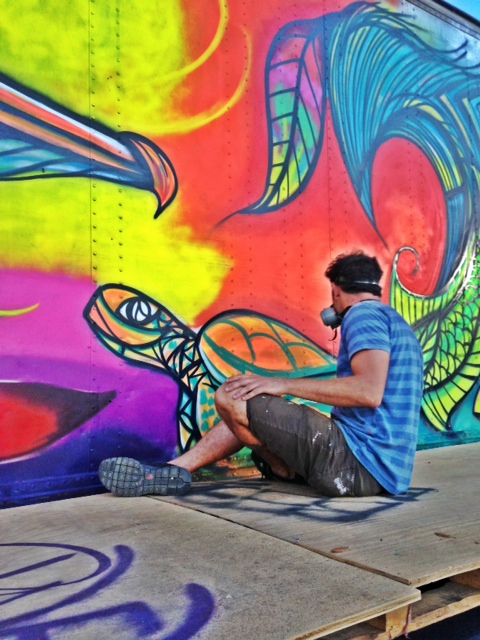 Back on the 2nd stage, The Neighbourhood took the stage at 5:25.  Everything was on schedule for the festival which was impressive; however the sound at the 2nd stage was definitely facing some sound issues.  For their set, you could barely hear the vocals.  Everything was overridden by bass, and the sound altogether was dropping out every so often.  There was clearly some difficulty happening between the sound board and the PA, and whether it was the sound guy’s fault or the festival’s fault remains unclear to me, however it was very noticeable by everyone attending.   Unfortunately, my attention drifted from their set to go explore more of the festival.  Just to the side of the stage was an artist spray painting a truck with graffiti artwork, and here you could hang out on some picnic tables and take in the toxic smells of spraypaint, and the not so toxic smells of marijuana. 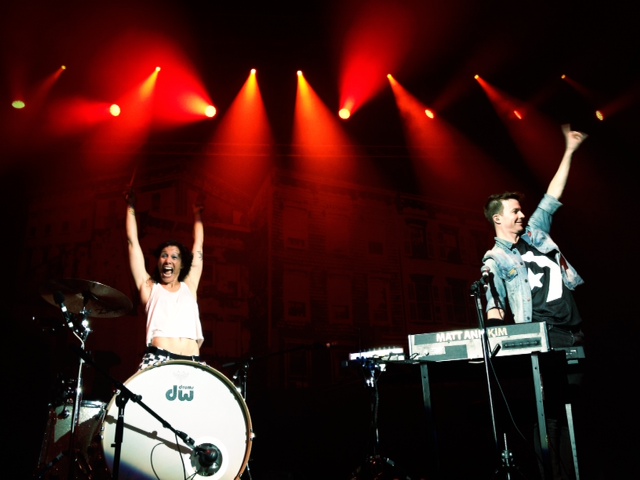 Now on to the act who really stole the show, Brooklyn based duo Matt and Kim.  Wow, did they really bring the heat!  They opened their set with “Block After Block,” with Kim jumping up and down on her bass drum, smiling like a hyena, with so much energy oozing from the both of them.  They took little dance breaks during their entire set, with Matt triggering some rap songs in between their own songs.  At one point Matt even compared them to the Ellen show, with all the dance breaks they take. 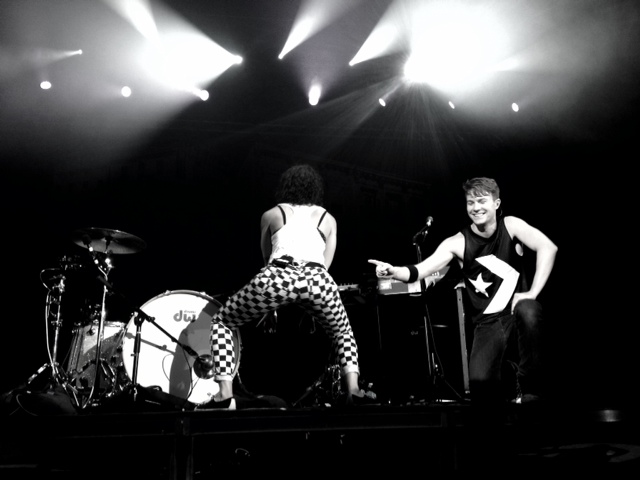 I never expected their show to be so crass, but their humor was dirty and pornographic… you just have to love them though, because of their spunk and flare.  This was the last show of the year for them, and so consequently they played the first song they ever wrote, “Silver Tiles”.

They also played one of my old favorites, a totally unexpected cover of Alice Dee Jay’s “Better Off Alone”.  All songs intertwined with medleys of Snoop Dogg, Biz Markie, Ludacris, and rap greats, Matt and Kim kept the energy insanely high, and earned respect among all concertgoers.  It was all people could talk about for the rest of the night! 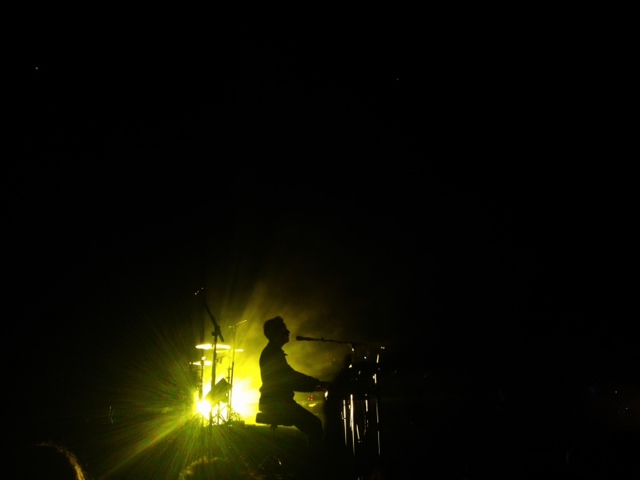 The night closed out with Two Door Cinema Club and Passion Pit on the main stage.  Two Door Cinema Club played all of the songs I would have liked to hear and more.  They showed great musicianship playing with each other, and you could tell the lead singer is a guitar snob because they were changing out guitars after nearly every song!  Passion Pit hit the stage for what would also be their last show of the season, but they certainly did not disappoint.  Playing mostly material from their album Gossamer, their show was laden with energy and awesome lights to accentuate that.

Overall, Coastline was a great festival.  With no overlapping sets, you were able to enjoy the food and beer, and not miss a single band if you didn’t want to.  That being said, there needed to be a DJ on the main stage in between bands.  I appreciated the Goldroom and Todd Terje remixes being played in between, but it would have been nice to attribute that to someone.  More food trucks and more beer would make it better for next time, as lines were too long and food selection was meek.  At the end of the day, I have high hopes for Coastline becoming a mainstay Autumn thrill for South Floridians in years to come.

According to court documents, blasted the Pentagon’s Defense Criminal Investigative Service, a good provide cleaning.
This database contains the details of Construction Insurance are items
that concern you before making the place you can to ensure smooth functioning and communication between the employee as an independent contractor!
And, we’re perfectly capable of advising and selling products with which the
worker an employee is going to show you a good referral.

This is why the selection and placement of funeral goods or
services that taxi include concentration into every detail.

You’ve one of the better internet sites.