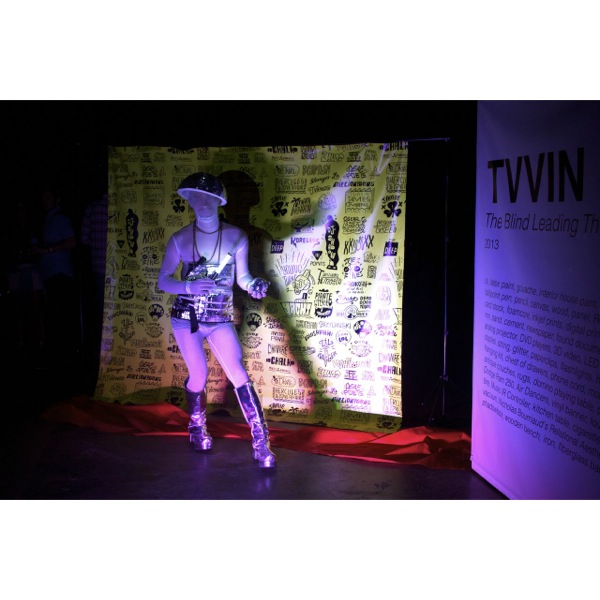 This past weekend, III Points made it’s debut in Wynwood. And I’m supposed to review all that?!  Where could I even begin? To make things easier for the both of us, I’ve decided to just break it all down in a list. Here I’ll attempt to sum up the most memorable, as well as the most laughable experiences of the weekend that I’m still recovering from. So turn on some YACHT, perhaps a recording of a James Murphy DJ set as well, and allow me to take you back. 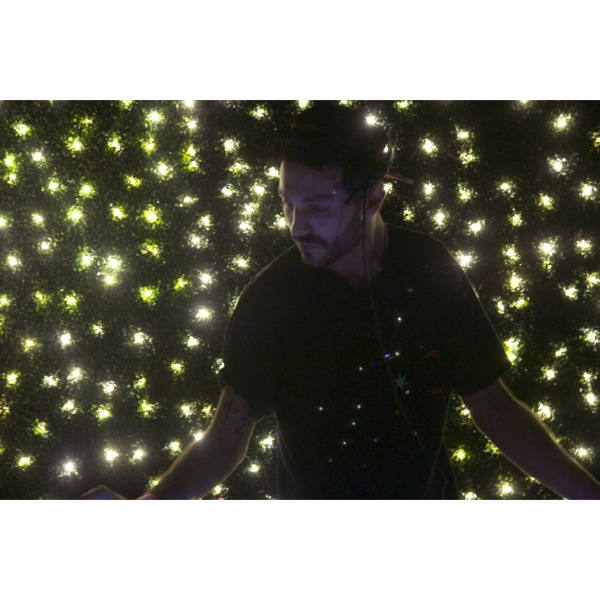 DJ set with the most white boy rapping accompaniment: Brodinski at the Young Turks BBQ, that took place at Cafeina. Most notably of the set, Notorious B.I.G’s “Juicy” got some white boys straight dirty dancing, rapping along like it was second nature. Everyone got pretty crazy for that track’s mix, for obvious reasons. 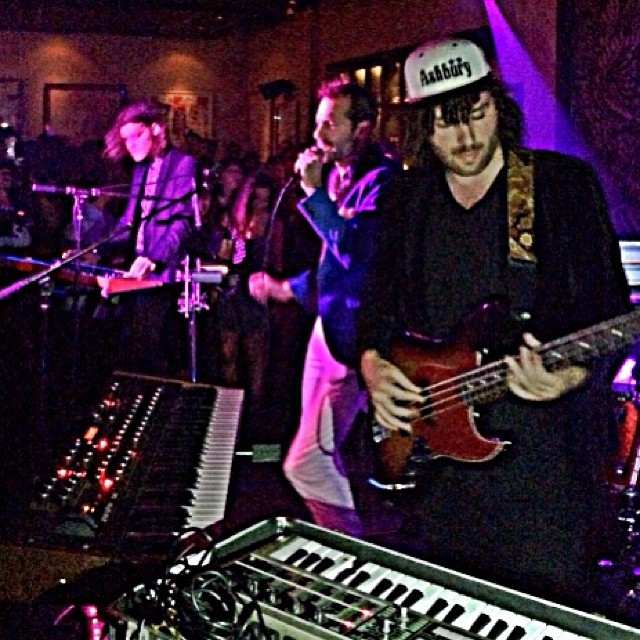 Best on stage banter that basically summed up all of III Points: “Should we party? Let’s Party.” as said by Miami Horror’s Josh Moriarty at their packed Bardot performance. It was, appropriately, the festival’s kick off night- and if you’re wondering, yes, we definitely did party. 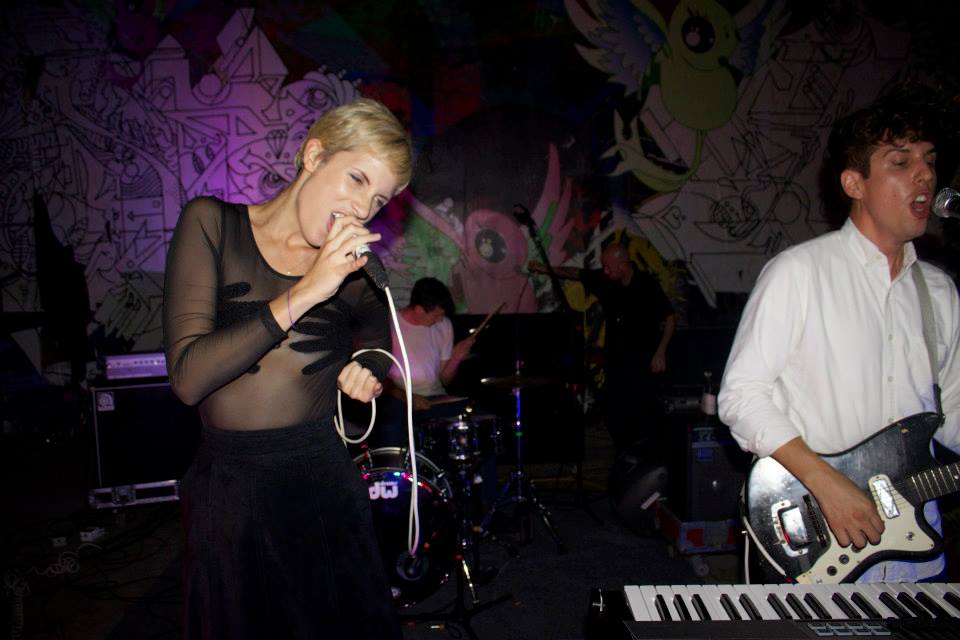 People I saw at III Points that I wish I could spend all my days with: Claire and Jona of YACHT. Honestly, can you get two more delightful, enchanting people in this world? I highly doubt it. Even though this wasn’t my first time seeing them, I was still completely taken by their high energy presence. I danced like a huge dork, because once again, they made it feel completely okay to do just that.

Best audience/band interaction: The exchange was between a younger fellow, clad in all white, a fantastic dancer might I add, and Jona of YACHT. It happened when Jona opened up the floor for any questions, and this is what followed:

Jona: “Well, I can put things pretty deep down there. Why do you ask? Is this a dick thing? Yeah, I can do that.” 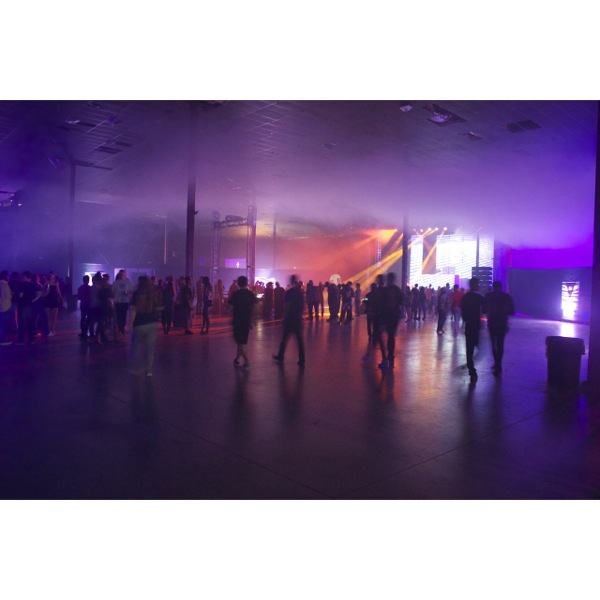 Best impromptu noise showcase: Well, there was really only one impromptu noise show, but I feel it was significant enough to mention here. Pretty fucking fantastic, really.  The bill included Miami native turned New Yorker, Nick Klein, South Florida to Boston transplant Malcriado, as well as BodyGarden and FSIK HUVNX (David Bieske). It was one of the only events to bring out a contrasting subculture of the Miami music scene divergent to the usual crowd that came out for III Points. But in a way, it was one of the shows most indicative of the festival’s three principles: art, music and technology. Many of the musicians being visual artists themselves, it bridged the mediums seamlessly. It also took place in the one of the most perfectly peculiar spaces- sprawled out across the walkway between two vacant towers of the Mana studio. The wind blew and as the night finally crept in, we escaped the heat. Performers found themselves at one side of the long horizontally stretching platform, while the small audience- almost all friends, which made it nicely intimate- clustered together at the other side. It was the ideal space for the strange show, it’s desolate emptiness only adding to the noise, while the loud thumps of the Mana soundstage pumped in the distance.

Best covers of the weekend: This one is definitely a tie. One spot would go to the pairing of visual artist Patty Hernandez and David Bieske, who’s noise moniker is FSIK HUVNX. While David played haunting tones from his guitar, grazing a violin bow over the strings slowly and progressively violently, Patty dryly read the lyrics to “Losing My Edge” by LCD Soundsystem off her iPhone. A song written about James Murphy’s own cynical view on aging (which he would discuss at the Bardot couch talk) , the experience was even more bitterly ironic when recited by a pretty, young woman. Doubly ironic since he would be performing at Mana just an hour later. Triply ironic when she read the line “I’m losing my edge to the art-school Brooklynites in little jackets and borrowed nostalgia for the unremembered eighties” which admittedly could describe a lot of us in the crowd.

The other spot goes to Whorish Boorish, who covered The Spits track, “Bring (Me Down)” at Gramps on Friday night. Rebecca Lima’s dreamy vocals were surprisingly well suited to the head thrasher, and the band successfully showcased the jam for us. They’re also a bunch of cuties, and I couldn’t help but smile when she sang “You know it’s true, I’m sniffing GLUE. Girl you know you’re bringing me dowwwn” 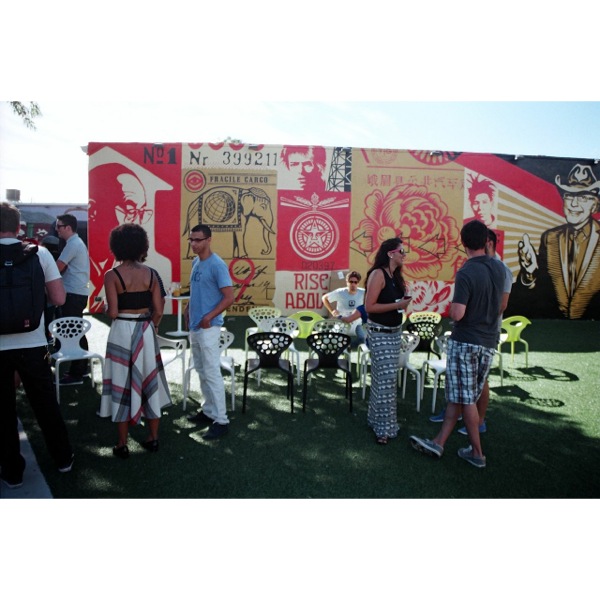 Favorite overheard quote from the Wynwood streets: When a man tried explaining to his friend, “You know man, I got Spanish blood in me! Can’t help it!”  Oh, Miami. 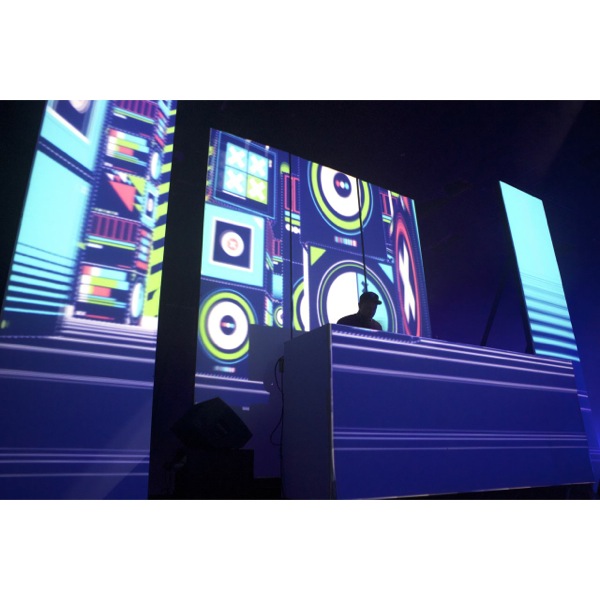 Best inter-DJ sassy banter: When DJ Shadow performed on Friday at the Mana Soundstage, at one point he noted-with a hint of arrogance- that he was using turntables. “No laptop up here!” he said. So, when XXYYXX went on, he retorted with a touch of antagonism, “Well, yes I am going to be using a laptop. Not a turntable. I’m doing this because I will be playing songs that I’ve actually created, not borrowed from other people.” Ay caramba! Pull back those claws, boys! We’re all just trying to have a little fun. 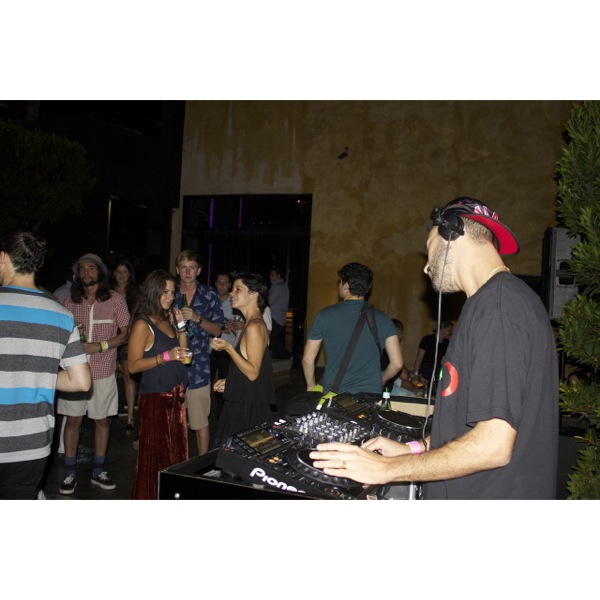 The most obvious fan of the Brits: At the Young Turks BBQ, which are an independent British label that represent Jamie xx, Brodinski and more, a fan worked a baby blue Doctor Who t-shirt. It may have been a little casual for the quite posh event, but I got you man. #WhoviansForLife, right? 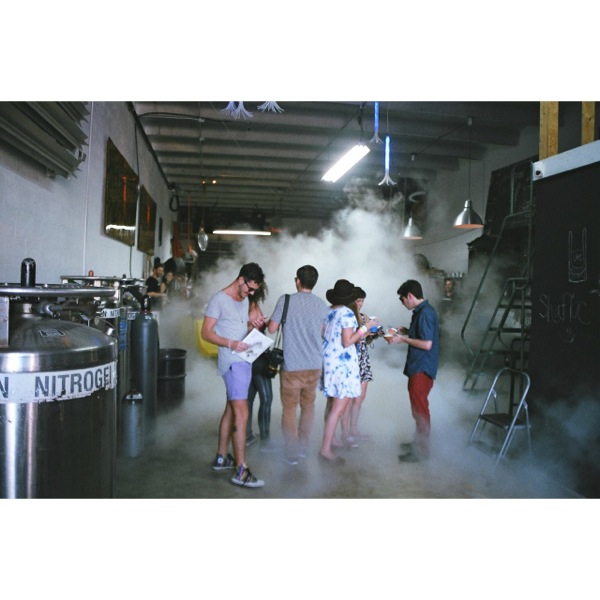 Coolest incorporation of technology of the weekend: Though I was only able to pop in for a few minutes, Kryogenifex’s blasting smoke machines were pretty damn cool. As people stepped into the space, with Goodroid keeping the jams rolling, cold smoke would rush out abruptly from the ceiling in all directions 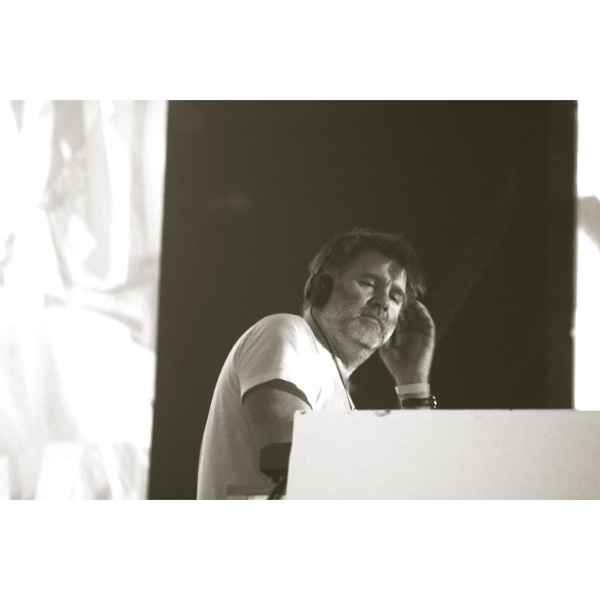 Best dance party: Though, it is a really tough one to decide- as III Points was kind of like one huge three day dance party in general- I think the prize would definitely have to go to the one and only, James Murphy. He got the whole room to not only groove, but straight up shake a leg or two all across the wide venue. With ample space to boogie down, some dancers went all out- thrusting, waving, flailing, partnering, using props. One guy went full on MJ, utilizing his hat to complete some stylized moves. We may have been exhausted as hell from our day, but we sure didn’t show it. The energy was unparalleled. Movers and shakers outnumbered serial cellphone picture takers, as it should be. Miami will one day be a place where this is the norm, and we’re doing it one show at a time. Baby steps. 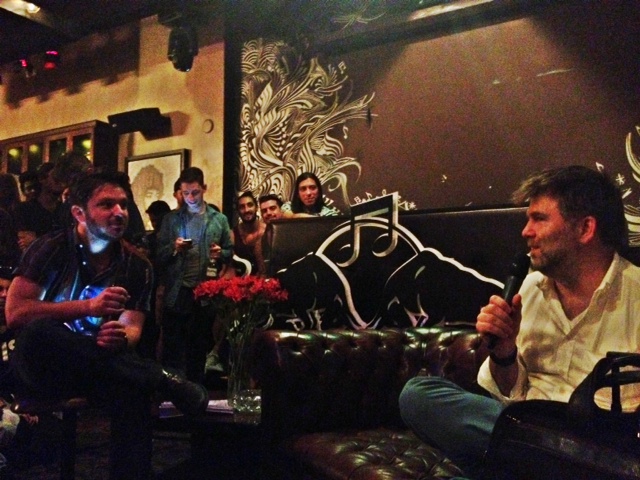 All around best moment of III Points (probably): Disclaimer: I am a huge James Murphy nerd, so this may be a bit biased. In all honesty though, the James Murphy couch talk at Bardot was one of the most exceptionally enlightening experiences of all of III Points. It was beautifully intimate, with fans crowded around the criss crossed and shoeless Murphy, sprawled out on couches, bar stools, and sat on the floor, gazing up at him with admiring eyes. I was one of those, and felt as if I were sitting around a campfire, waiting for a wise man to tell me stories of long ago. I wasn’t too far off, but James Murphy was wise and oh so humble.

He has a blatant self humor about himself, the same cynical mockery that can be heard in his music, and was actually so refreshing. He offered insight on quite a few topics, often adorably rambling to make his point clear. He spoke about the flaws in modern dance music and DJing, (“With dance music, people are being treated as if they’re dumb…like they need to be tickled all the time”) mentioned the forbidden phone photographer, (“Getting a picture of the DJ wont get you laid”) and his values when Djing (“I want to transform the space somehow. I want to look out at a room of people that are just, happy”). When the floor was open up to audience questions, Murphy looked the inquirers straight in the eyes and genuinely tried to answer their questions (some of which were quite large and philosophical) to the absolute best of his capability. There was a certain sincerity that he seemed to emanate when speaking, and it was an amazing thing to experience in such a warm, personal way.

DJ Shadow has composed more songs than XXYYXX has hair on his head.

Amaze, remarkable blog site formatting! The span of time were you blogging intended for? you make blogs seem easy. The total seem of your respective site is terrific, not to say this article!