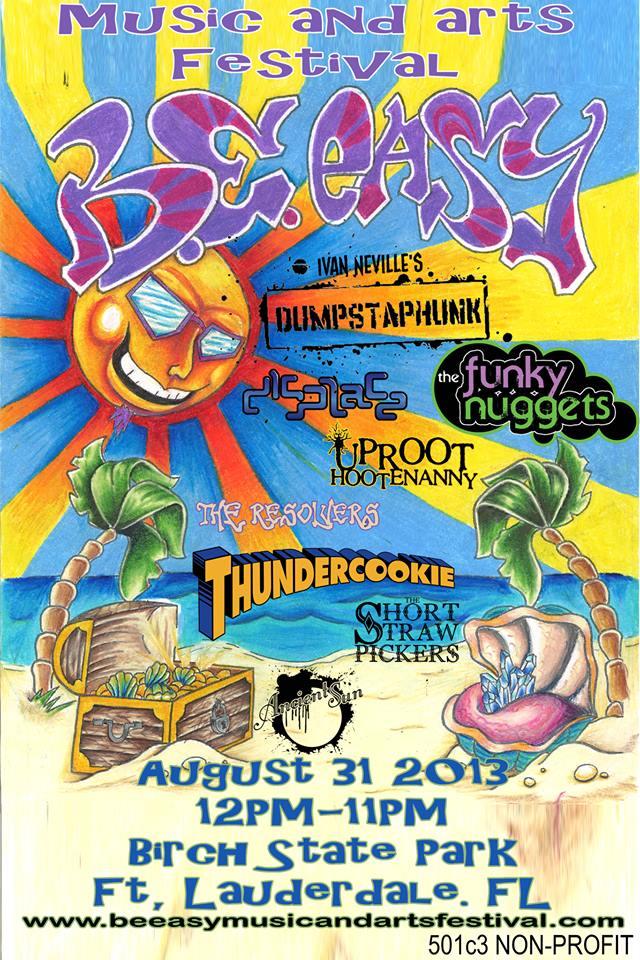 The B.e. Easy Music & Arts Festival took place this past Saturday, August 31 at Hugh Taylor Birch State Park in Fort Lauderdale. All proceeds from the event went to benefit The B.e. Easy Scholarship Fund. This fund helps people struggling with addiction by providing financial assistance, and important contacts to those who want help. Furthermore, the fund promotes an open dialogue amongst friends and family of those struggling with this deadly battle.

Located in a quiet and quaint State Park in east Fort Lauderdale, concert goers were treated to a variety of genres of local music on two stages, culminating with national headlining act, Dumpstaphunk. A wide variety of local artists were also on display in a natural Shakedown area situated under a beautiful, giant Banyan tree. This was the second year of this well organized, family friendly event – and from the looks and feel of it, it seems to be building up quite a bit of momentum.

Some of the musical highlights from the festival, in order of appearance, included Lucky Costello, a Jacksonville based jamband.

Local boys Uproot Hootenanny treated the crowd to their very own brand of Roots, Folk, Celtic, Bluegrass and Whiskey Fueled Fun. This is a new song, called “No Guarantees”, which features Ojay Smith from The Resolvers on percussion.

Big Band Reggae act The Resolvers, hailing out of Deerfield Beach, got the crowd pumped up for the headliners while the sun was setting providing a beautiful backdrop for a very appreciative and playful  audience.

Moving into evening The Funky Nuggets paid tribute to the memory of Ben Evans and the Evans family with their stirring rendition of the Grateful Dead’s “New Speedway Boogie” along with special guest Billy Gilmore on electric fiddle.

Highlighting the evening was New Orleans, Louisiana based national touring band Dumpstaphunk – one of the most prestigious modern funk ensembles on the scene – featuring Neville family members Ivan & Ian Neville, Tony Hall, Nick Daniels III and Nikki Glaspie, who is quite possibly one of the most dynamic female drummers on the planet.

Big thanks to our friends at CHeeSeHeaDPRoDuCTioNS for providing video highlights from this wonderful event. For more highlights from an outstanding day of music for a good cause watch below.