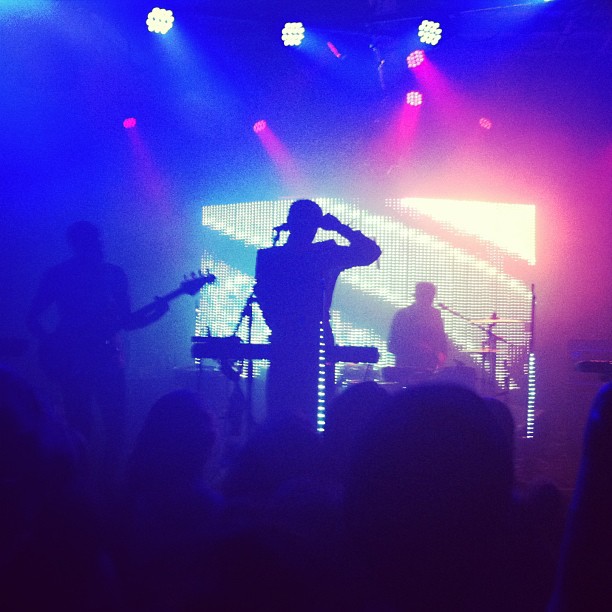 What an incredibly FUN evening at the Grand Central in Miami for STRFKR, and opening acts Chrome Sparks and Feelings.  Feelings kicked off the night around 9pm with his solo act packed with verve, riling up the crowd for what was to come.  True to his name, his set was packed with feelings of shoegaze and chillwave, and ended his set with an interpretive screaming bit into the microphone.  It was loud.

Originally a solo act from Ann Arbor, Chrome Sparks (aka Jeremy Malvin) took the stage alongside two of his friends playing with him.  The set was beautiful, with a very groovy, synth heavy vain running through it.  Their music was very atmospheric, building and layering sounds and melodies on each other, which made for a fun mix of dance tracks for everyone.  The crowd loved them, and they were the perfect appetizer to our night with STRFKR.  It was an all ages event, and while usually that can be annoying for us “old” people, I found no problem with the STRFKR crowd. Sure, there were some really young kids, but they were having the time of their life and I did not come across a single obnoxious person.

By the end of Chrome Sparks set, they were playing to a packed out room, however the show was definitely not sold out.  There was plenty of space to move around, and you could see the band anywhere you were standing.  I was very impressed with the musicianship of all the members in Chrome Sparks.  Moving from one instrument to another, the lead singer would play the xylophone, and then back to his station on keys, all the while singing his little heart out.  The drummer was strong and clear, driving the band forward with each rhythmic tap of his sticks.  Chrome Sparks acknowledged the crowd at Grand Central and had a pretty long monologue going on; however, we could not understand a word of it because the microphone was too quiet.  You could tell his words were coming from the heart though, and this only increased the excitement of the crowd. 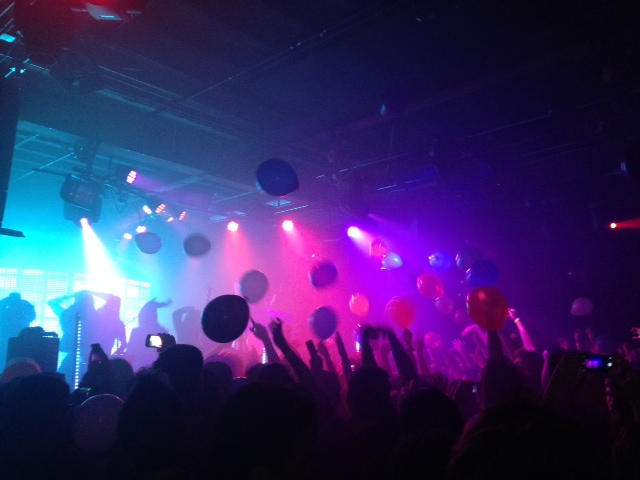 Chrome Sparks had a very grand production, with visuals that were out of this world.  Many visuals were geometric patterns rapidly receding into the middle of the screen, while other visuals included some great Japanese anime.  Whoever the VJ was deserves major props, because they complimented the music so well.  It was a journey for both the ears and the eyes.  They closed their set with an extremely bass heavy twerkified jam.  I overheard a concertgoer behind me remarking, “This is some Diplo shit”.  To compliment this performance, the projector displayed old MTV footage with booty shakin’ all over the place.  It must have been some footage from The Grind, or maybe spring break footage from back in the day. 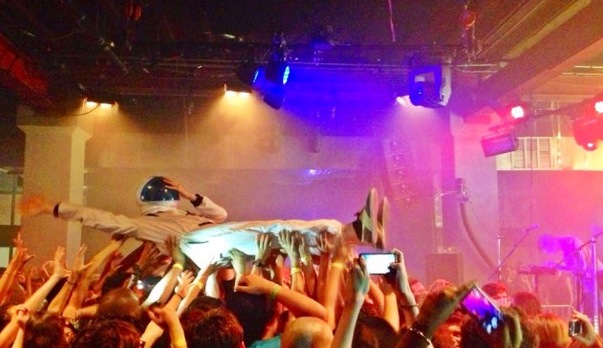 STRFKR closed the night out with a set that was truly the fire.  Songs for the night included “Golden Light,” “While I’m Alive,” and the sick dance track “Rawnald Gregory Erickson The Second”.  Toward the end of the second set, they released hundreds of balloons, while people in ridiculous costumes (Gumby, a horse, and elephant, etc) bombarded the stage.  There was an astronaut that crowd surfed his way from the stage, to the back of the crowd, and all the way back to the stage.  It was flawless!  The crowd was eating up every moment with every song, and clearly loving the song choices and energy from the band.  The lead singer was sporting threads that appeared to be a dress you would see on Mrs. Doubtfire…  Interesting style coice for sure, but no one can explain the workings of rock n’ roll.  STRFKR encored with their rendition of Cindi Lauper’s “Girls Just Wanna Have Fun”… which was… a little flamboyant to say the least.  I kind of cringed.

This was my first time seeing STRFKR and it will most certainly not be the last.  Their breed of electro-pop is delightful and exudes pure joy.  This band has HIGH energy, and knows how to put on an entertaining show.  They do “indie dance music” with panache and finesse, young professionals for sure.  They are larger than life, and that translates through their stage presence and performance.

One Response to “Review: STRFKR and Chrome Sparks at Grand Central 9/24”

Below such setting, platform of home’s banner shoe industry B2B is round-the-world shoe net takes the lead in with along with model data is alternant platform cooperates, in coming on stage the country is based on SaaS+ of human body data the first times to serve entire network questionnaire, call in come from 213 enterprises, the answer of personage of major of 1924 shoes industry.