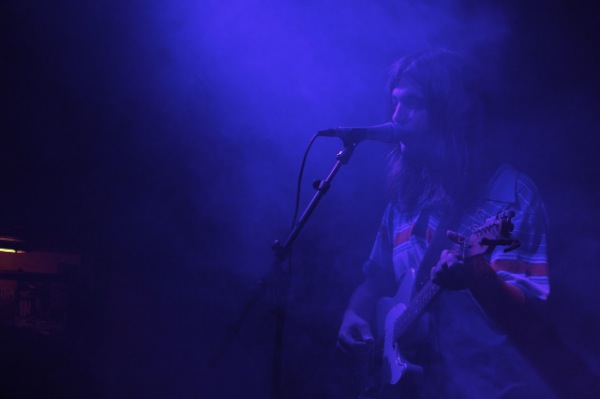 Whether you like them or not, (honestly though, who doesn’t at this point?) Jacuzzi Boys are kind of becoming rock stars. Their new album has already been streaming on Pitchfork Advance, they’re about to mount a wild tour with Wavves and King Tuff, and they’re being recognized by some major publications. All of that is amazing and they should be very proud, but where you could really see how far they’ve come- and how big they’ll be- was right here in Miami, at their Album Release show, at none other than Churchill’s Pub. 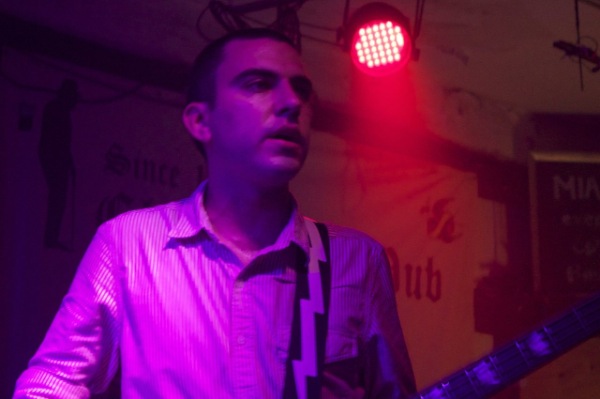 Churchill’s, like many of its inhabitant’s drinks, was filled to brim, almost overflowing as crowds poured outside of the doorway, clustered together on both sides of the bar, and conversed claustrophobically in the back patio. Everywhere you looked there were familiar faces from all of South Florida’s many scenes, coming together to yet again support our own Hometown Heros. But before Jacuzzi Boys went on, or as Audio Junkies’ Eddy and Greg Alvarez like to call them “Hot Tub Dudes”, Kenny Millions and Rat Bastard got weird first. The two Miami noise legends brought their trademark freakiness complete with blaring saxophone and rib shaking guitar, their clamoring craziness complemented by their projection of hardcore porn compilations in the background. The night was off to a good Miami start. 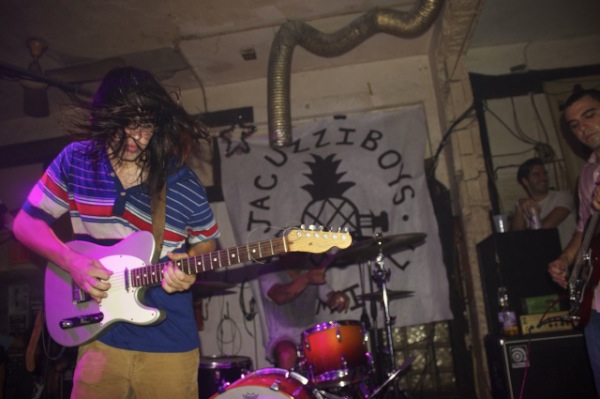 In between sets, DJs and long time Jacuzzi Boys pals, Tom Tuna and Regurgitate kept things grooving as more and more people piled into the homey Churchill’s. Next up was Shark Valley Sisters, a two piece comprised of members of Load and The Holy Terrors. They were a perfect lead into what the rest of the night would become. Lead singer Rob really hit the mark when he noted of Jacuzzi Boys that, “You want to hate them because they’re so damn successful, but you CAN’T because they’re such fucking good guys!”.
Then the JBoys took to the stage- fog machine in hand, and a troupe of pretty brunettes following close by. A thick mist of haze clouded around the stage as they took their spots. By the time the show was over, you were left with a smokers lung sans the aid of a single cigarette. But no one minded, it all highlighted the aforementioned rock stardom that seems to be closing in on them quick. Gabriel Alcala, whose long locks draped over his eyes, thanked everyone for coming out as they slammed head first into a frenzied set consisting of oldies and newbies off their latest effort, a self titled album that is taking the indie world by a storm. The tracks from Jacuzzi Boys are a monumental progression from 2011′s Glazin. The songs find themselves in mysteriously atypical spaces, with single “Double Vision” dreamily bouncing around yet staying particularly singable, and was a stand out track during their live performance. 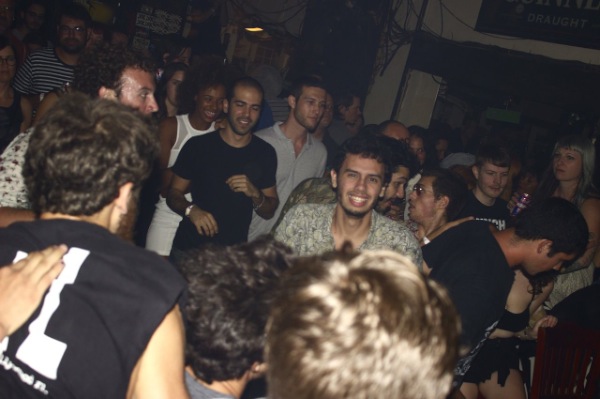 As soon as they’d begun, the crowd went utterly insane, moshing and dancing in the little space they had. When their hit “Glazin” graced the stage, the crowd yelled along at opening lines, “SUGAR IN MY HEAD, MELTING EVERYWHERE IN THE SUNSHIIIIINEEE!”. And I mean, can you paint a better picture of the Miami music scene than that snapshot in time? See, that’s the thing. The Jacuzzi Boys show was not only a celebration for their fantastic new album, but it was a downright party to commemorate how far we’ve come as a community in the last couple of years. 2013 alone has seen a major step up in the music/art/drink/food subcultures, and, slowly but surely, our efforts are becoming known outside of our own context. Whether it’s a band like Lil Daggers getting their new album on Noisey, having a fantastic new festival premier in Wynwood, or local artist Brian Butler being spotlighted on VICE, which also brought them to Sweat Records, Gramps, and Wynwood, shining a brilliant light on it’s artistic integrity. Miami is coming into it’s own, and people are taking note. 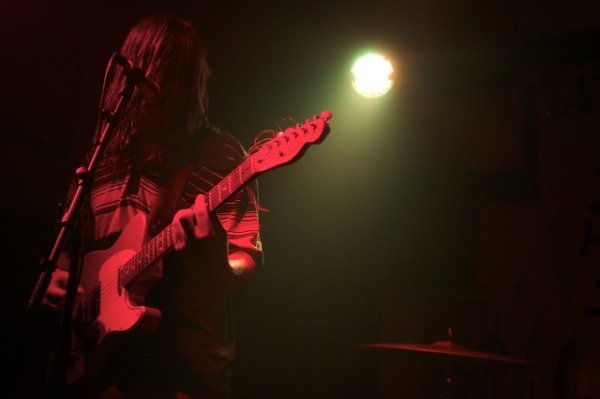 As the Jacuzzi Boys conjured up the wildest of crowds, the fans, already drenched in their own (and probably other’s) sweat, were soon refreshed by a cold rain of champagne, spewing from the bar that people were already standing atop. If that doesn’t sound like a celebration, than I don’t know what does. Girls danced on the right of stage as guys crowd surfed close to the ceiling. After a much requested encore the Jacuzzi Boys signed off appreciatively as the crowd were left to check for any battle scars. I had a few myself. The party wasn’t over though, as DJ Disco Duck kept everyone dancing into the wee hours of morning, Churchill’s extending their hours for this special occasion. When they were forced to leave, many found themselves at The Corner. It was the kind of night that you felt nostalgic about before it was even over. It was a night that honored Miami’s immense progress, and Jacuzzi Boys were the toast.

Thanks A Bunch for this site, can happily declare we now have
a steam shower of our very own and we think its great

A large amount of helpful guidance on this website, actually want a steam shower unit within my bathroom

A Lot of functions on these steam showers, I’m keen on the multimedia opinion and the lighting style

Fantastic page, really been browsing forever for ideas
on the very best rattan furniture for our home and in our patio.
This site sincerely helpedgreat blog some great info here

Awesome page, previously been looking forever and a day for ideas on the best rattan furniture for
our home and in our patio. This website seriously helpedgreat blog some great info here

Simply adore this web site, awesome information here, was a tiny bit
sceptical about acquiring a steam shower unit for our house however, the content here sorted my head out, incredible thanks