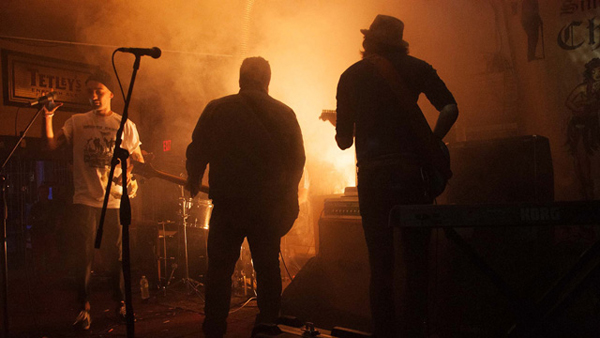 Miami locals and eery-indie-drone band, Lil Daggers, are moving forward to new sounds and new members since their last release. On their latest EP, No Pizza No Peace, a dreary yet pretty soundscape emerges from the band. Released on September 10 via Beyond Beyond is Beyond Records , it heralds their musical progression and maturation as songwriters.

How did you guys get hooked up with Beyond Beyond is Beyond records?

Michael Ruiz-Unger: We were out in Ithaca, New York cruising for a late night bar when we over heard some dude talking about a local Shaman near by. We followed him into town where he proceeded to take us to every bar on the main street. By the fourth or fifth bar and the occasional death stick we had to ask, “Where is the local Shaman?” He then replied, “It’s me. Mike Newman. I am the Shaman.” We then went to his friend’s apartment where we found out he also has a label.

Why do you prefer releasing your music on mediums such as cassettes rather than cd and digital or just digital?

Michael Ruiz-Unger: Theres something warm about playback on a tape cassette but they all come with a digital download so thats dope.  Those cd digipaks are dead huh?

What was the recording process like for the EP? Who (or where) did you record it with?

Michael Ruiz-Unger: We recorded the EP at our friend’s house/studio down south (Pinecrust Studios, Ryan Haft). It’s was a bit wild because there’s a nightly poker tournament that goes down there (not joking). So on one side of the house you have a studio session going on and in the other half there’s a full blown casino. As you can imagine some of the gamblers would wander into our sessions. Some had great life stories and we tried incorporating that into the EP, almost how Dark Side of the Moon has some spoken word but it didn’t work out.

What are some of your musical influences?

Michael Ruiz-Unger: Our musical influence ranges from member to member. There’s some Jonestown Massacre, Black Sabbath, and early Floyd influences, but I’ll stick with Carol King as our go to. You can’t fucks with that Tapestry album.

What are some of your non-musical influences?

Michael Ruiz-Unger: Film and basketball are great influences of ours. We’re still trying to write a side EP that will sync up to the film Blue Chips starring Nick Nolte and Shaq. If not that then The Air Up There starring Kevin Bacon.

How do you feel these new songs compare to your earlier work?

Michael Ruiz-Unger: There’s two new members (Andres Bedoya and Michael Ruiz-Unger ) in the band since the first LP so the songs are just coming out different naturally. I think before I joined it had more of an upbeat yet grey sound but since my involvement and my constant depression about the universe expanding…its all gone down hill.

What’s next for Lil Daggers?

Michael Ruiz-Unger: We’re currently writing the second LP which will be about super hero, Michael Stampede. A character whose beginnings sort of mimic the up brining of Superman except his power derives from his quick anger which leads to him demolishing cities with his feet. A real hero gone villain type.