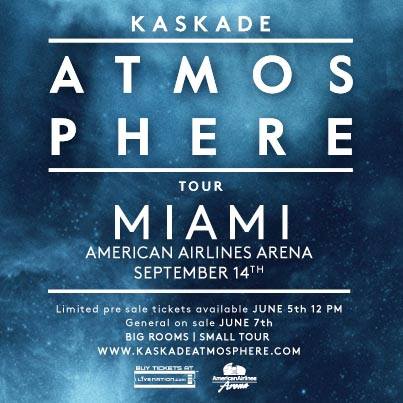 This Saturday,  GRAMMY-nominated DJ and producer Kaskade is kicking off his arena tour in Miami. His latest album, Atmosphere, was released yesterday, and  is the follow up to his GRAMMY-nominated 2011 album Fire & Ice. Earlier this month, he ended his summer residency at Marquee Nightclub & Dayclub in Las Vegas with 24 shows over sixteen weeks.Kaskade has released seven studio albums, scored nine Top 10 hits on Billboard’s Hot Dance Airplay Chart, created chart-topping remixes for everyone from Lady Gaga to Beyonce, and appeared at all the major summer music festivals. This is a show you don’t want to miss!
We have your FREE  tickets, and all you have to do is enter to win!

How to enter: (all ages)

2. Copy & paste this on your wall (If your Facebook is set to private, this particular post needs to be set to public so we can see it)

One Response to “Kaskade Ticket Giveaway”

Below are really the 5 essential aspects you must consider in choosing:
First thing is first, just how a lot are really you prepared to pay out
for the vacation overseas? Whenever you are planning a vacation, among the
most important considerations is probably the budget.
The door to door service is very convenient and also dependable,
especially for anyone that have concerns and/or will not speak any sort of Spanish.

Here is my homepage: best honeymoon all inclusive (http://www.youtube.com)