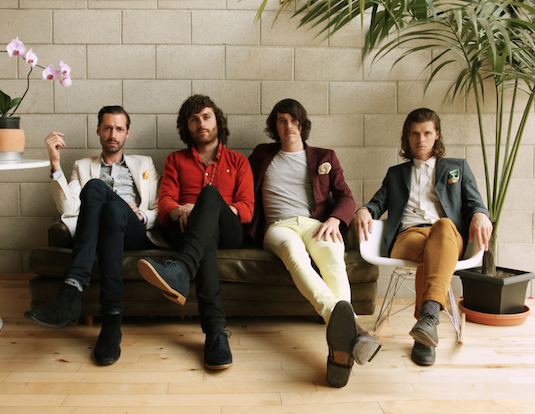 It’s III Points week, and excitement is brewing. Can you feel it in the air? I sure can. In just a couple of days, dozens of artists will take to stages, DJ booths, and God only knows what else- all dispersed about the Wynwood area for our enjoyment. The festivities will kickoff on Thursday, and what better a way to set the weekend in motion than the electro dream pop Aussies, Miami Horror! They’ll be making themselves at home at our very own Bardot, and will surely get us in the mood to dance the upcoming nights away. This is not their first time around our parts, but it may be the most important to date. Check out our chat with lead producer Benjamin Plant to get the scoop on their move to the states, upcoming sophomore album, and thoughts on musical collaboration. Let the anticipation commence!

How do you think your move to Los Angeles has changed the way you make music, or view the music industry? How much does it play into the next album?

Benjamin Plant: The strange character and cinematic look is what we went there for, basically inspiration that we couldn’t get in Australia. The summery dreamy vibe of the west coast has probably influenced our sound quite a lot, when you consistently walk outside to a blue sky lined with palm trees its hard not to soak up some of that.  Also re-living a bit of that 70′s LA that a lot of our influences lived when creating their music.

You seem to be very fond of collaborating, and your latest single finds you with Sarah Chernoff as lead vocalist. How did you come about working with the Superhumanoids singer? How do you usually approach a collaboration?

Benjamin Plant: It usually happens in many different ways, sometime we write with a friend on someone we want to work with. Sometimes we might like a voice and present the song almost finished like we did this time around.. Sarah was recommended by Tyler from Classixx.

In what ways do you think the new album will be different from your debut? What are some prevalent musical themes?

Plant: I think its definitely more musically mature and flows better. Thematically there are definitely differences. Its a little more introspective. We have all been through relationships and breakups and that shows a little, somehow though most of the music still manages to be quite euphoric and upbeat.

You’ll be playing at the inaugural III Points festival in Wynwood this weekend. There are quite a few acts playing that make music in a similar thread as yours, (Jamie xx, YACHT, James Murphy) do you think you’ll be checking out the rest of the festivities throughout the weekend?

Plant: Yeah of course, there are great acts.

Last month you released a brilliantly produced “Making Of” video for the second album. Since you will be participating in the kickoff  for a festival significantly influenced by the arts and technology, how important do you think utilizing multiple platforms of expression is to Miami Horror?

Plant: I think it is very important. At least tying in the visual with musical platform. Social marketing obviously plays an important part when it comes to marketing but otherwise I haven’t seen anyone use it conceptually.

This is not your first roll through Miami, having already played during Art Basel and more. Have you gotten to see much of the city? What do you like best, and what are your least favorite aspects (horrors, perhaps)? If you haven’t seen much, what do you look forward to exploring?

Plant: I’ve been here on holiday, and I love the tropical art deco world. Miami has a few things to answer for but it also has many things you can’t find anywhere else in the world!