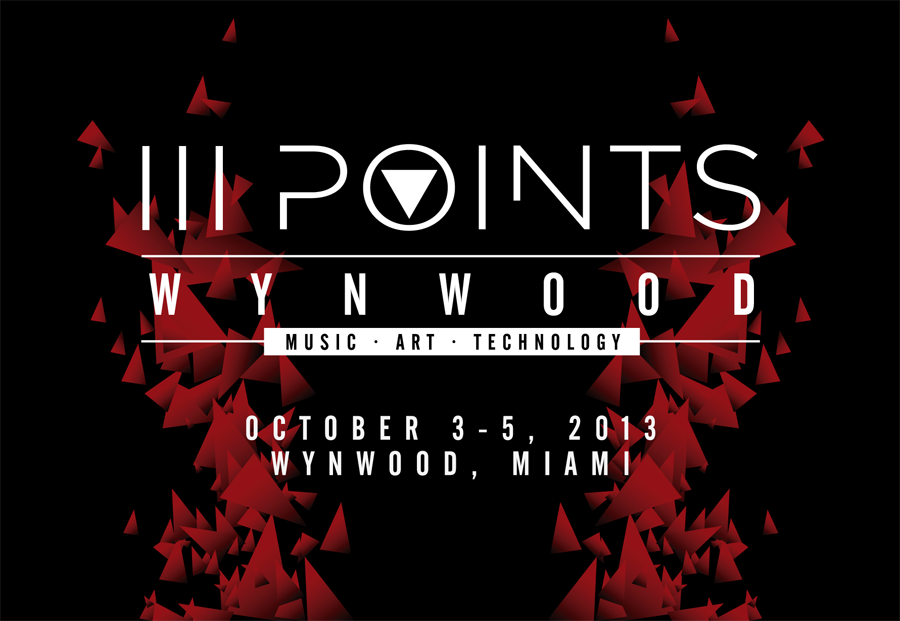 As if October wasn’t jam packed enough, what with The Breeders, Sigur Ros, Portugal. The Man, and Black Rebel Motorcycle amongst the many making their way down to Miami that month, there’s a new event to be very, very excited about. It’s called III Points Festival, and it will be combining the best of the best in music, art, and technology. The festival takes place October 3-5, in the culturally rich area of Wynwood. Some of the biggest names that will find themselves wandering about our favorite street corners include James Murphy (!), Jamie xx of The xx, DJ Shadow, Miami Horror, XXYYXX and our own Miami newcomer, Austin Paul.

Throughout what will be the best three days of October, you’ll find yourself at BBQs, dance parties, film screenings, III Point lectures, and a plethora of shows. And they’ll all be hosted by your favorite venues, local galleries and beloved Wynwood spots including:
1ofK
Bardot
Briske Gallery
Butcher Shop
Cafeina
Gab Studio
Gigi
Gramps
Grand Central
Handcrafted Tattoo
Imagesounds America
Junior & Hatter
The LAB Miami
Lesters
O Cinema
Spinello Gallery
TSL
Wood Tavern
Wynwood Cigar Factory
Wynwood Indoor Soccer Field
Wynwood Walls
Awesome, right?! Here’s a breakdown of how things will go down:
Thursday: Kickoff show with the always exciting, Miami Horror! The night will also include Body High showcases, as well as other boutique launches.
Friday: While happy hours commence, gallery shows will be hosting a variety of unique III Point experiences. The London music label, Young Turks will have a BBQ before taking things underground for a party called Point Blank at the Wynwood Cigar Factory. Performances will include DJ Shadow (his first since his Mansion kick off last year), XXYYXX, and Koreless.
Saturday: DFA Records will also be getting their BBQ on prior to some more warehouse and club partying that will seamlessly merge the festival’s three founding focuses- music, art, and technology. Music will be provided by none other than King (James) Murphy himself, Jamie xx, Jacques Greene (amongst others) and live art by one Miami’s favorite artists,Typoe.
Amid the flurry of concerts, food/drink events, and art showings, there will be activations going on throughout Wynwood to satisfy all of your entertainment needs. Some of these include: Artist Musical Chairs, Beer Bingo, Freeze Dance, Disco Nap, Samsung Blogger Lounge, Bro-Gaming Den, and Film Screenings with the David Lynch Foundation.

Excited yet? I thought so. To get your fix of all this and more, make sure to purchase tickets via the website below, starting tomorrow at 11AM. A downloadable app will be available to help you keep track of the artists, navigate the streets and stay in tune with all of the happenings. And of course, SFMO will be there covering all the events.
Purchase tickets

5 Responses to “III Points Festival Premiers in Wynwood This Fall”

[...] Whether it’s a band like Lil Daggers getting their new album on Noisey, having a fantastic new festival premier in Wynwood, or local artist Brian Butler being spotlighted on VICE, which also brought them to Sweat Records, [...]

The reason you would buy from China is that they have the teolcnhogy to make footwear that the USA can’t make. The factories in China make for all brands not just one and they are so far ahead of the rest of the world it is not funny. In fact this factory also makes Brooks!

Pandoras Box may furthermore possibly be substantially complex should you are not excellent applying
this. She is also giver and for her sex is special, something she can’t give to
anyone. His past and present leading ladies are all Latinas.