Review: Reggie Watts at The Light Box at Goldman Warehouse﻿ 6/7 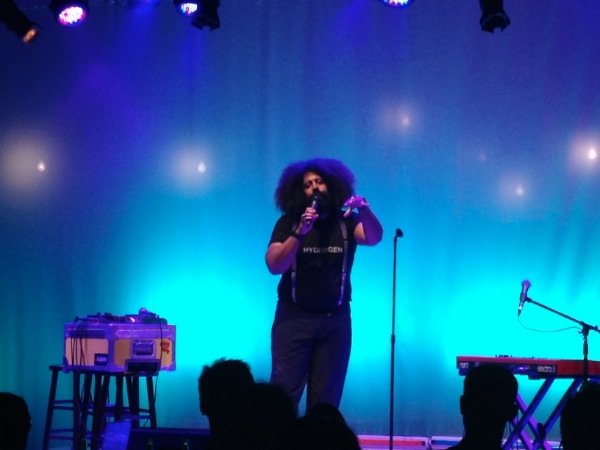 Torrential downpours and flooded streets didn’t stop Reggie Watts from having a sold-out second night of his three-night residency with the Miami Light Project. The show was in full attendance with soggy people filling a room visually similar to that of MTV Unplugged: all black interior, warehouse beams rooted around the room, and raised platforms arranged in a semi-circular pattern. From each vantage point in the room, it was clear that there was not really a bad seat in the house; the setup was cohesive and well thought out so that no vision was obscured no matter where your seat was. 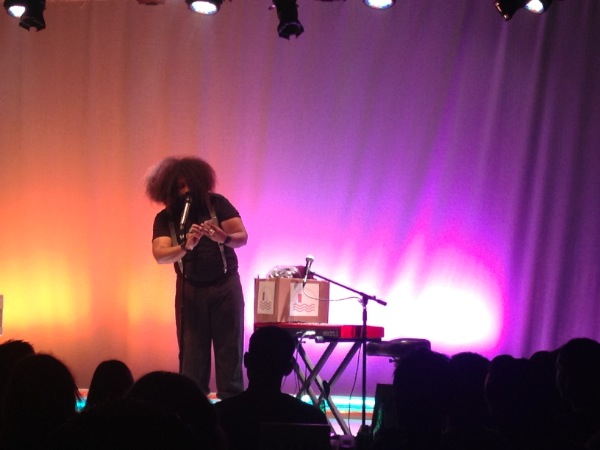 Reggie opened his set by welcoming the audience and thanking us for being there. He also explained that this was a special place for him, as he opened Miami Light Project two years ago on opening day. After some casual banter, he put the microphone down in order to get some music started. This is where the fun begins for a Reggie Watts show; a mastermind of improvisation and creativity, Reggie’s verve on stage is boyish, faux-sexual, and compelling. His act being part comedy and part music, you are sure to get plenty of laughs and head-bopping out of your system. 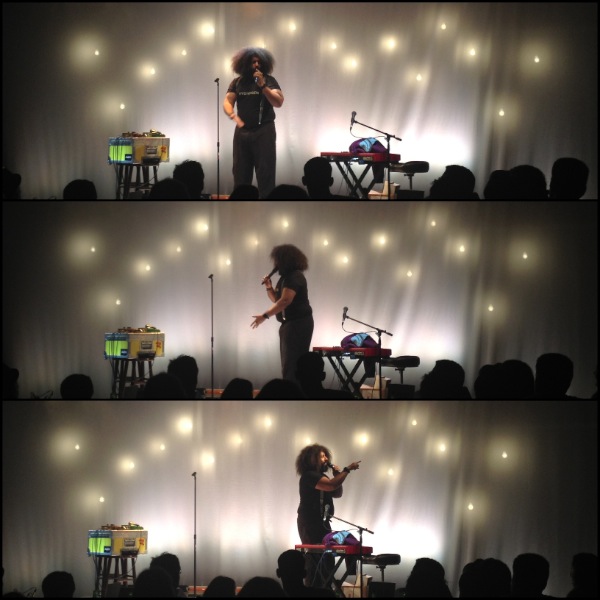 Watts has a penchant for improvising a plethora of imaginative personalities, and whether it is a husky female voice that solicits a sexual connotation, or a bubbly man’s voice drawing from the back of the throat, he dominates these impersonations with a flawless finesse. Beyond his varying vocal styles, Reggie uses other sound making techniques, such as beating the microphone against his chest and then looping that using his Electro-Harmonix 2880 Super Multi-track Looper. He drew a roar of laughter from the audience when he then started beating the microphone against his crotch… then rubbing it, which mimicked the sound of a maraca.

Watts had the entire room in the palm of his hand. Looking around, you could see all faces intent on him, and when it applied, grooving hard to the music he was laying down. I don’t think I saw a single person in the room without a smile from ear to ear! One of the amazing things about a Reggie Watts show is his ability to improvise like a shaman. He is a true commander of stage and story, letting all inhibitions go and carrying the audience through a wonderland of creation. At one point he got on his keyboard and dedicated a song to a cute couple in the front row. “It was 1am, you were tired, but you were friends. You got in each other’s eyes, and you wondered what was next. But she was so much shorter than you,” is how the song began, and developed into a slow ballad narrative on how they were just friends, and took things to the next level. After the song was over, they presented Reggie with a big brown box that he opened on stage and shared the contents with the audience, which included some garbage pail kid posters, a hoodie, and a “droopy eye sticker”. 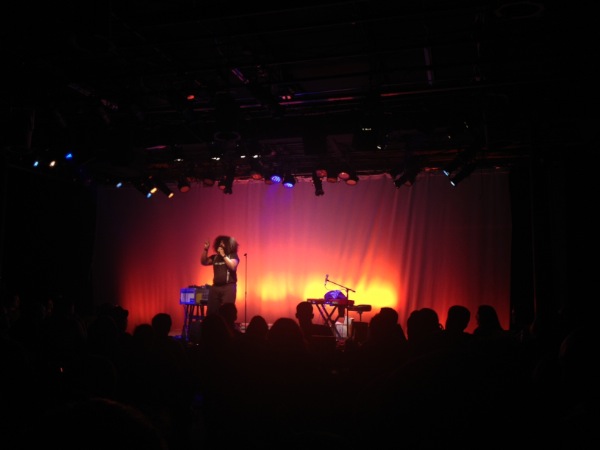 Another highlight of the show was storytime, where he changed the mood lighting and began to narrate a story in a voice that reminded me of Andy Dick. “Once upon a time, a small bird trickled across a limberland path, the water which doth did sprinkle so much so that the babbling almost overshadowed the hopping steps of the small tiny bird. The bird with beak smaller than smallest thing that you could imagine, moved up and down as beaks do, as birds do, when they are alive.” This portion of the evening made me wish I could hang out with Reggie everyday and just pay him to tell me story after story, because it was not just the storyline that was amazing, but the sound effects he included as well. Eventually the story whittled down to only a monologue of sound effects of robot machinery until it was “The End”.

Being at this show only made me wish I was able to experience his entire three night residency at Miami Light Project. His skills of looping and layering sounds and vocals, paired with his uncanny ability to create something out of nothing, makes each live performance a unique and intoxicating experience that is sure to ignite inspiration within any concertgoer. It is so refreshing to see a nontraditional performance from a true artist of life. If Reggie is ever again in the Miami area (or wherever you may be who is reading this) you must make it a top priority to be there 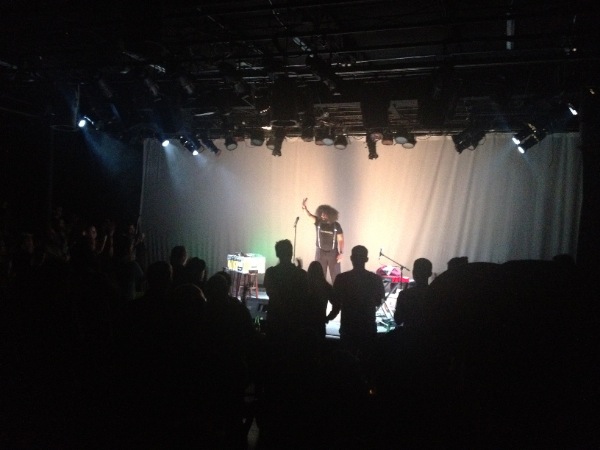