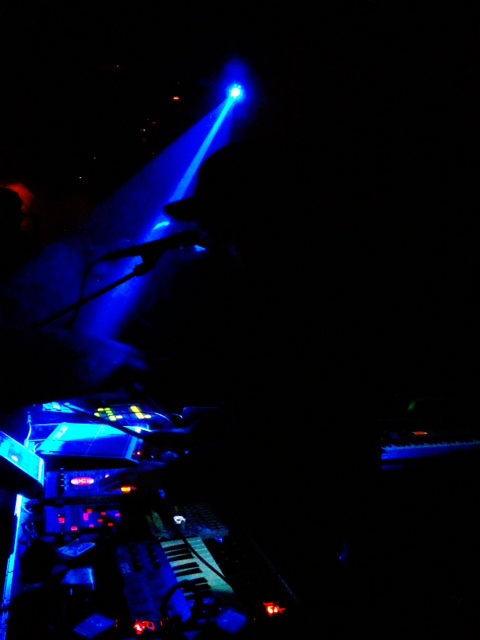 It was a sultry evening at Bardot on Wednesday night, where the Slap & Tickle resident DJs sprinkled the evening with tunes between sets from Lemonade and headlining act John Talabot Live.  John Talabot’s live show consisted of him and fellow Spanish music producer Pional (aka Miguel Barros), and was a sure treat for anyone who decided to go.  What I was about to see from Talabot is something I was not expecting, but overly pleasing to all of my senses.

The evening kicked off with resident DJ Eyal Agai on deck.  His set reflected his usual penchant for disco dance and house tracks, including the popular Duke Dumont single “Need U 100%”.  Agai has an incredible talent for knowing how to communicate with a room, taking into account the volume of people and energy, his musical choices are congruent with the general vibe.  Agai’s tasteful selections were perfect for allowing the room to fill up, people to socialize, and prepare for the coming acts.  The highlight for me was when he put on a jaw dropping remix of Jackson 5’s “I Want You Back”, as done by Light Echo.

Lemonade hit the floor around midnight, where they gave us a taste of their elixir for a 45 minute set.  Lemonade is a 3 piece band hailing from Brooklyn, by way of San Francisco.  They are vocalist Callan Clendenin, bassist Ben Steidel, and drummer Alex Pasternak.  Their music was entertaining to watch, ranging from electronic dance music, to cumbia beats, to a bit of Caribbean flare with sounds of steel drums coming through.  They had a nice projection of visuals set up behind them, displaying ambient and atmospheric imagery, which was a pleasant pairing with the music they were performing.  There were high points and low points in terms of the vocals, but the actual music behind the voice was strong enough to override this opinion.

John Talabot and Pional hit around 1am, opening their set with a gorgeous tune that oiled us up for what we were about to experience.  Each having their own little station of drum pads, computers, noisemakers and microphones, they worked as a pair of interconnected musical spirits.  The first track they played started off very mellow, with only a few things going on in the song, but as time went on, the track expanded into a huge tapestry of multi-layered sounds.  They had a perfect synergy with each other, enabling their tracks to unravel with effortless professionalism.  Much of their music felt like ambient electronica, with both of them performing vocals and looping them through the tracks.  There were a few times I was reminded of Moby back in the Play days, with hushed and husky vocals you can’t quite make out, yet still managing to project this glorified paradise in an unseen world.

Talabot had a mallet and drum pad that he was digging into on one track in particular, which I felt invoked the epic nature of the Genesis track “The Brazilian”, a song where Phil Collins tears into the drum kit.  This duo kicked it up a notch by throwing in some modern breakbeats, making it something entirely new and tasty for the ears.  Talabot was also sure to include some fun little percussion bells, and even added some sampled cow bell sounds, which was apropos considering the circumstances.  These additions gave their set a kick in the ass, taking it up a notch to some real fun pop vibes similar to that of Caribou.  At the end of their set they played a song with a violin melody set to a really heavy bass.  This was such a strong combination, my heart vibrating from the depth of the bass pounding and my ears ringing from the twang of the violin.  Eventually this developed into a straight up hoedown grassroots electronic jam, which was a great way to end the set with something a little more diverse than what they had been playing all along.

The only thing that disappointed me was the amount of time John Talabot’s live outfit performed.  It was such beautiful flowing dynamic music, that I feel they needed at least two hours to work the room proper.  In any event, I recommend this show to EVERYONE as a must see.  It was a unique and vibrant experience compared to those hackneyed nights where you see a DJ only merely pushing buttons.  These guys have real talent that conjures up a universal tapestry of sound that is sure to “wow” any concertgoer with an open heart.