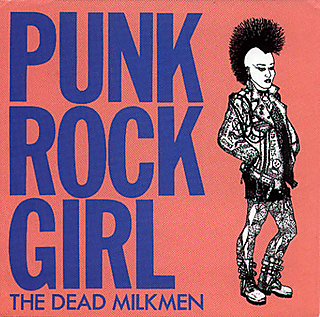 If I could somehow alter reality and make one song be written about me, I would definitely choose “Punk Rock Girl” by The Dead Milkmen, hands down. Even though I don’t steal cars, and am definitely not as bad ass as the girl described in this track, a (punk) girl can dream right? The Dead Milkmen are one of my favorite bands to come out of the 80′s, with their frequently satirical brand of punk remaining unmatched to this day. Followed mostly by the underground scene, “Punk Rock Girl”, a single from their fantastic fourth release entitled “Beezlebubba” (I promise it’s a really great album guys) got them onto MTV and was the height of their brief commercial success in 1988.

The song and video alike are pretty perfect, with vocalist Joe Genaro’s high pitched squeal of a voice matching his adorably meek presence, fantasizing of a mohawked dream girl. Don’t be fooled though, The Dead Milkmen are totally hardcore and actually pretty hilarious, with satirical songs like “Stuart” and “Bitchin Camaro“. So, “Punk Rock Girl” is probably the closest they ever came to writing a love song. But this track encapsulates their undeniable charm, and will never fail to get me in the mood for pizza, record stores, and fallin’ in love.
Extra Notes:
The lyrics
“Eat fudge banana swirl

Just you and me
We’ll travel round the world
Just you and me, punk rock girl”
pretty much summarizes what I want out of a relationship. Hit me up boys.