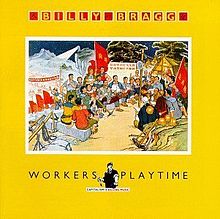 This week I’ve decided to throw down one of my all time favorites, a man whose voice I’ve grown up listening to, one of the key artists that has continually reinforced my obsession with British music. The man I of speak is, of course, the one and only Billy Bragg. The track I bring to you is one of my favorites, a staple in the Billy Bragg discography entitled, “The Only One”, coming from his 1988 album, “Workers Playtime”. This song is simply gorgeous, spotlighting the effortless manner in which Bragg can write such emotive and relatable music. Nothing in this song is forced, the eloquently heart wrenching lyrics roll off his distinctly British tongue, enunciating every syllable so that each word settles down cozily with us.

Billy Bragg mainly writes two types of songs: protest songs and love songs. This is a love song if there ever was one, but it combines the fluently smart word play found in many of his political songs, tracks that are always refreshingly fervent yet perceptively well composed. With the most heartfelt lyrics like, “I long to let our love run free, yet, here I am a victim of geography”and “She said, ‘ kiss me or would you rather live in a land where the soap wont lather?’”  makes “The Only One” a track that will always be in my “Sad Songs That Aren’t Bright Eyes” playlist in iTunes (which, yes, is an actual thing).

Today at 56, Billy Bragg is jamming with the hippest artists, touring, and though he continues to write lovely music, to me there is only one love song to remember him by- one that will remain a trophy on the shelf of beautiful music, never getting dusty, always gleaming true.