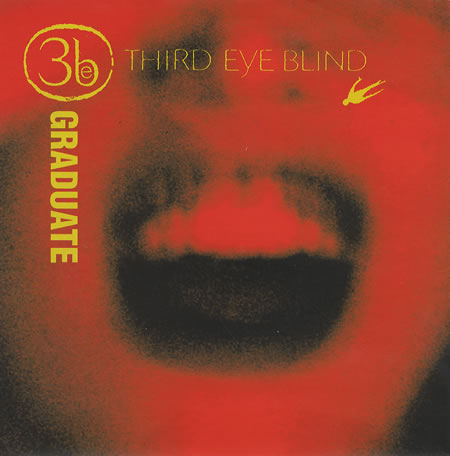 When I first thought up the idea of musical Throwback Thursdays, I knew that at some point Third Eye Blind would come up. I never expected it to be so soon, but here we are, gazing down the cliff of a 90’s classic that we pretend we don’t absolutely adore. When deciding which track off of their sweetly angst filled /kind of whiny/shut-up-you-know-you-love-it debut album I should dust off for this particular highlight, I knew that “Jumper” and “Semi Charmed Life” were off limits. You know those songs and you love those songs, so we don’t need to go over what great suicide prevention and meth addict songs they are- right? Okay good.

I chose to go with the song directly after those two hits on the album, “Graduate”. The premise of the song is pretty simple, Stephan Jenkins (who is 48 now, whoah) reaaalllyyy just wants to graduate already. Particularly, he wants to get his “punk ass off the street”. What makes this song a hell of a better graduation song than Vitamin C’s (remember her?!) track of a similar title, “Graduation”, is that 3eb is totally over it. They aren’t sentimentally looking back at the “good times”, they are fucking frustrated and want, no, need to get away from it all- and that is way more exciting to listen to than corny nostalgia. It is with that same urgency that the song is written, and I think it’s electrifying. I can never skip this song when it pops up on my iTunes- as soon as Jenkins screams that opening line (“CAN I GRADUATE?!”) I’m hooked. In the last line of the song, Jenkins hastily inquires, “Will this song live on long after we do?”. Well babe, this is me trying.

One Response to “Throwback Thursdays #5”

Motorcycle Drive By is clearly the standout track on the album.