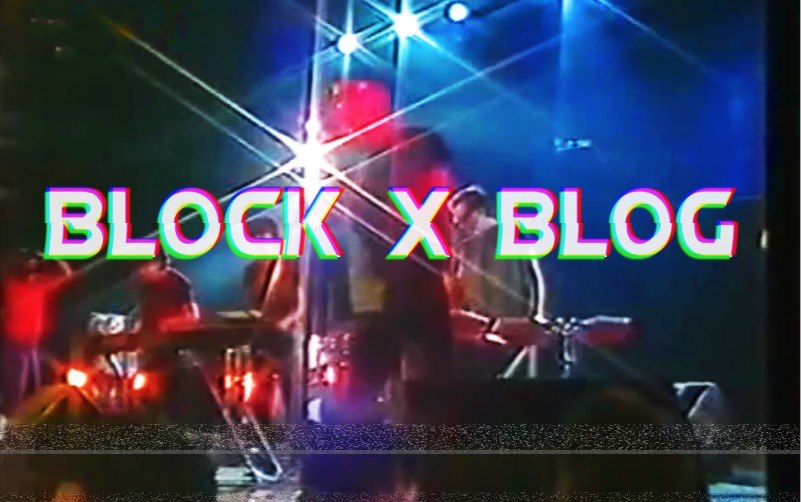 Only four more days left until Block x Blog! Here’s a new batch of bands for you to get snug and cozy with before the festivities. Purchase tickets

Alright, if you’re at least remotely connected with South Florida’s music scene, you had to have heard of Jacuzzi Boys before. But then again, the world is a strange and mysterious place, so we’re going to talk about them anyways. Jacuzzi Boys are what happens when Gabriel Alcala, Diego Monasterious and Danny Gonzales grow up in Miami, then drink up every ounce of every element of this wild city, and are handed a guitar, bass, and drums. Though electronic music has it’s place here, Jacuzzi Boys in their latest album Glazin are what it’s really all about. It’s sweaty, sexy, and sun soaked. No doubt their crunchy guitars will make you move in all the right places. They’ve gone on international tours, have possibly one of the best promo pictures ever and Iggy Pop jams out to them. They make me proud of Miami, not only for their success as musicians, but because of their endless support of the scene by DJing nights at Gramps, and hostingweekly dance parties at The Garret. And for all that, we <3 you Jacuzzi Boys.

Though not originally from South Florida -a Chicago native rather- Michael McGinnis, the brain behind PLAINS remains a staple in our scene. Summoning sounds so moody and hypnotic, the music spans from sounding like Interpol to Arcade Fire to jangly Editors all in one album. The album I speak of is the self-titled debut- an album that rattles and distorts under a grey sky of grunge fuzziness. Along with Lil Daggers, they too are featured on Limited Fanfare’s latest sampler, premiering a new song called “Hurricane City”. PLAINS have garnered enough attention to be voted Miami New Time’s Best Supergroup of 2011, so rest assured, their set at Block x Blog will not disappoint.

One of my favorite South Florida bands, The Gun Hoes are a duo comprised of that one dude who looks like an indie version of Prince, and that other dude who’s got crazy awesome chest hair. By that I mean Gabe Miranda and Anthony Hernandez of course! These guys are some of the most fun that I know, and their music is no different. As said in their hilarious New Times article from last month, “If a band could sound like a drunken sex party on the beach, the Gun Hoes are it.” Fun, right? Yes! Their music is deliciously lo fi, sloppy, and addictive. The two put on a hell of a show, so come prepared for spilt drinks and sore feet- because you WILL dance. Our friends over at Blood Oath Slumber Party as well as the groovy Cheap Miami, will also have some new tapes from the band to be sold! Entitled “6 songs to be bummed to”, don’t forget to pick one up at Block x Blog, Radioactive Records, or Sweat Records- you wont regret it!

In the midst of all the fun craziness that will happen this Saturday, Ex Norwegian will be there to cool us off with some of their sweetly sway-able ultra indie jams. Having started in 2008, there is a wide catalogue of songs you can listen to- earlier this month they put out their fourth album entitled Crack. The band’s music seems to be dripping with nostalgia and bittersweet heartache, and it will have you swooning away at the first strum of a guitar.