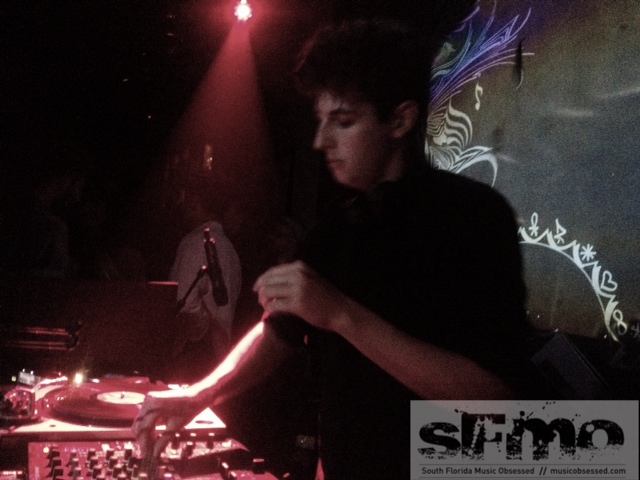 With the Young Turks label owners and crew in tow; the familial vibe in the room was impossible to deny. This being Jamie xx’s first solo gig in Miami ever, the Brits had a lot to prove in a short amount of time.

When I arrived, Nic and Tic, label homies of the Young Turks, were busy setting the mood for Jamie xx and John Talabot. The sets that these DJs serve up are ambient, limitless and unplanned. With small groups of people scattered around the venue, I quickly scanned the room and thought to myself, “Do we really know when the song has transitioned into the next? Are we consciously listening to the music or are we unaware until it comes to a screeching halt?” I wasn’t going to answer these questions tonight.

After Nic & Tic finished up, Pional, of Spain, was introduced and the crowd huddled around his set-up, which was juxtaposed in front of the actual DJ booth. Jamie xx stood behind Pional for most of the set, Heineken in hand, silently taking in the scenery. During his hour, there was always a constant beat underlying whatever contrasting layers he would add to it and he easily succeeded in raising the energy level in the room.

Being a huge fan of Jamie xx, I had extremely high expectations for never having seen him DJ sans Romy and Oliver. With no laptop and hardly any electronics at his disposal, he rifled through a lunchbox full of vinyls and CD’s, song after song, and didn’t look up for approval once. For my generation, this practice is unheard of.

He opened with The xx’s “Reconsider” and the bass was so loud it forced the entire room to vibrate. Next up was a remix of Brandy’s “The Boy Is Mine,” which took us all back to 1998. As a whole, his set was very 1990’s but not genre-specific in any way, which had me feeling like Janet Jackson in the “That’s The Way Love Goes” video. We heard R&B, pop, chillwave and altogether an upbeat set. When Jamie dropped “Sunset,” Tic, a Basquiat doppelganger, grabbed the mic and urged people to stop taking pictures and be in the moment…no one obliged to that request. Looking over my shoulder, I realized that I had been dancing with Florence Welch for the past few minutes. Tall, thin and in her usual flowy gown, she blended seamlessly into the crowd, barefoot and all.

Jamie definitely played heavenly new material. His style was organic and he seemed at ease from start to finish. The typically ultra-chill xx had a band member who came to Miami Music Week and proved that is not the only thing they’re capable of. Having said that, I can assure you that no one in this room was considering a nap.

It’s not a secret that Miami is a pretentious city. The Young Turks solidified an event for Miamians that was void of any snobbery. Florence, Jamie and other well-known’s floated around the room without hesitation, making friends, not being confined by their celebrity and tables stacked with champagne. The openness and old-school traditions that this camp demonstrated has left me truly hoping that this is the first of many events to come.

It was one big room—full of bad Brits’.

thought she said she wrote for pitchfork. good read none the less

I stayed in an abvusie marriage for 12 years because I wore that what if I leave him, and he drinks again and lose his 13 years of sobriety? And you know what happened when I left him?Nothing I had feared. In fact, he moved one of my friends in with him two weeks after I moved out.I have a new what if for you in the form of a different question Who were you before you put yourself last? What if you could be her again? What if the happiest you’ve ever been in your life is just around the corner without him? What if the worst we imagined was actually the best that could happen for us? Cindi recently posted..

Thanks for the post! I enjoyed a set of his at Soho Beach house last month and nobody really seemed to pay mind. I didn’t make it to Bardot this week but his set at Cafeina Saturday (followed by Four Tet) was top notch as this one seems to have been. I see some Boiler Room staff in the video, good vibes. Really hope all this talent coming out of the UK (Young Turks, Hotflush, Bicep, etc.) can continue making trips down here because I think about moving to London a few times a week now!