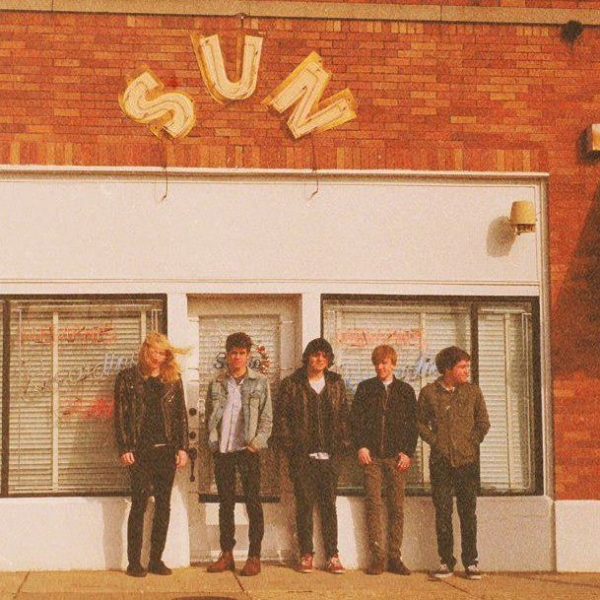 SXSW Music is right around the corner, and even if you wont be taking to the skies (or road) to attend, we still thought it would be nice to highlight some of our favorite acts that will be sweating up the stages with their sweet jams. And what better way to start our little showcase, than with one of our most obsess-worthy bands bands on the lineup. If you haven’t heard of The Orwells by now, then have no fear. We snagged a little on the road phone interview with the band as they made their way to Boston for a show. The Orwells are composed of Dominic Corso on guitar, Grant Brinner on bass, brother Henry Brinner on drums, Matt O’Keefe (or Baby Chuck) on guitar, and Mario Cuomo on lead vocals- and yes, none of them can legally drink yet. Mario (19) is the oldest and the rest of the band is either 17 or 18.

The thing is, The Orwells don’t really fall into the category of “that one cute rock band in high school that played Green Day covers at the local record shop that thought they were cool”, because The Orwells fucking rock. Whether it does or doesn’t have to do with their age or their hometown, their music is refreshingly real and has set them apart (and above) tons of the now “Buzz worthy” bands out there. Most of all, it doesn’t really matter if they can’t get into the venues they play for a few beers before a show, because once they get on that stage, all you can see is a band that knows exactly who they are and what they’re doing. And with that, I present to you, The Orwells: In Conversation.

Do you ever get sick of everybody talking about how young you are, or do you think it’s something that should be taken note of?

Grant: I feel like it should be taken note of to a certain extent, but it shouldn’t be the main subject of what people write about us. Like, to a certain extent people can make it seem like it takes away from our music- and that’s exactly what we don’t want.

Mario: Everybody should like, get past it, and not like, I don’t know…it’s cool that  everybody knows it and it’s fine that we’re this age, but it shouldn’t be a “thing” anymore.

Another thing you guys talk about is being true to where you come from rather than jumping onto a “scene”. What aspects of Chicago do you think your music brings out? What would your sound be like if you were elsewhere?

Matt: We’re not actually from downtown Chicago, we’re actually from a suburb called Elmhurst which is like 20 minutes west, and I think THAT’s where the aspect of our music comes out. From being from a sleepy suburb. You can kinda tell in the songs, especially “Ancient Egypt” and even in “Mallrats” and stuff like that is that coming from a place where nothing was really happening, you would go to the mall to have fun and then at midnight the town would literally just shut down almost. So, I think being from the suburbs is a different aspect to our music, especially from Elmhurst.

Grant: I feel like it almost gave us an excuse to do something, like play music, because if there was always something going on- as opposed to boring- we might not have played music. It was kinda a thing to do.

Yeah, I feel you. So, my favorite thing about your music is kind of how honest and raw it is, but it does have a lot to do with the time and place that you wrote it. Why do you think that people much older than you can still relate to the music? Why do you think it carries to other audiences that aren’t as young?

Grant: Maybe it’s because they’re like, nostalgic of when they were teenagers.

Matt: I think just even when people are older, yeah it’s like a nostalgia thing. Most of the stuff that we do sing about is relevant to when, you know, you’re in high school. But, you know, even if you grow up or screw up 20 years before us or 30 years before us, or just decades before us, things change a bit but you still go over the all same stuff. Even the title of the record is “Remember When”. We were taking it as a look back, as a “remember when you used to do this?” and I know I’ve heard a lot of people who are older than us will take the name as that too. Like, “Remember when we were in high school and we were going to the mall, and we were like, you know, doin this shit and that shit”. It’s a sentimental thing.

I can see that. One thing that you (Matt) said  in another interview I read, that I thought was really cool, was about “Halloween All Year”. You said it was like an “anthem to all the kids in the Midwest who are too old to trick or treat, but still try their hardest to believe there’s something in the closet, or something’s in the basement. The kids who are coming of age but trying their hardest to maintain faith in the unknown and unseen”. Do you think that the band is doing the same kind of thing for you guys? Is it more of a time capsule of where and who you are now, or can it be a therapeutic thing where you work out what’s going on in the present through your music?

Matt: You know when we move out of our parents houses and now that we’re out of school, I don’t think there’s going to be songs that are coming out of high school and you know, your town at midnight anymore. We’re definitely gonna move on with our lives so I think it it’s a little more therapeutic than it is kinda this time capsule of us trying to stay this…perhaps, you know, always remain this kind of cartoon character like we’re kids, so I don’t think we’re going to do that.

Are you scared of getting older and what it might do the music?

Me too. So, the music industry is very different than it used to be-with Twitter and Facebook and Tumblr- there seems to be bands everywhere. What do you think, personally, is the most important aspect of making music and getting noticed for it now in this time and generation?

Mario: I think it’s always about just making other people like, feel something- feel good or, I don’t know…giving people something like a song or an album- no matter how much the internet or social media have to do with it- it always comes down to just giving somebody a song to listen to. Yeah.

Yeah! So, in one of my favorite songs, “Never Ever”, you sing “We’ve got this fear of aging, we’re living in a day dream”. This was written long before your influx of success and recognition. Do you feel like you’re kind of living the dream now?

So, this is your second time at SXSW right?

Do you think you’re going into with any different mind set than you were last year? What have you learned through playing so many shows lately that you might take into this performance?

Speaking of being exhausted, you guys have had a lot of dates in a pretty short amount of time. How do you manage, are you tired all the time or is it not a big deal to you?

Grant: I mean, we’re still pretty young so we’re not like old men or anything. We still get exhausted, but it’s not too bad.

So, Matt. In some interviews you’ll go under the name “Baby Chuck” which is what you call yourself in your solo project. Are you still going to do some Baby Chuck stuff, or is all of your time dedicated to The Orwells now?

Matt: It’s all Orwells. Any Baby Chuck thing is kind of me in my basement at like…2 in the morning and I get down there and can’t wake up my parents so it’s all like, light stuff. So The Orwells are always going to be number one and Baby Chuck’s kinda, kinda dying now.

So, are you guys almost done with your next album? Is it all written?

Matt: We’ve got 9 songs right now that we’re very proud of, and we’re gonna go into the studio when we’re done with the tour. We hope to get in around April  or May and then have the record out by Fall of 2013.

I look forward to it! So I know “Remember When” was done just by you guys on your own and with no real pressure. Is there anything different in the song writing now that you have this audience that’s waiting?

Matt: Yeah there was a lot more, you know, weight on our shoulders and there was definitely a lot more pressure but I think instead of like crumbling under it, we used it to fuel us to try harder. Now it’s some of our best stuff we’ve ever written.

When you’re playing stuff from “Remember When” does it ever feel irrelevant since so much time has passed?

Grant: Yeah definitely. Maybe not the lyrics as much, but like the way we wrote the songs. We’ve just matured as song writers more. The lyrics are still pretty true, because it was kind of like a diary entry or something.

Do you guys all write together?

We love your album here and hope you can make it down to Miami some time.

Matt: We will definitely make it down there eventually.

You can catch The Orwells at SXSW at 5 different shows:

One Response to “SXSW Spotlight: The Orwells”

Wow, was browsing for new music and this really hit the mark. Thanks.