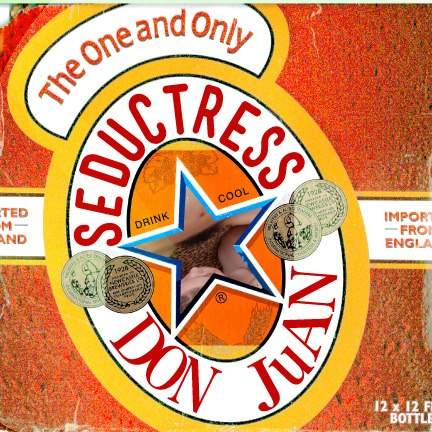 A couple of weeks ago, Chris Dougnac-along with Skadi Gaudet and Jacob George- threw a going away show at Sweat Records to celebrate his departure from Miami and the hopeful future of a freshly reunited Toad Eyes…err, I mean, Seductress. HOLD UP, let’s back track with a brief history of the band in question. Toad Eyes is a band originally made up of Fernando Ramos, Chris Dougnac, and Alex Cohen in the glorious April of 2010. Since then, they’ve had three releases (all within a year of each other) tons of memorable shows as well as a mini tour with their buddies Ice Cream, and the successful addition of fellow musician/long time friend Virginia de las Pozas. It almost seemed like Toad Eyes were at their peak when it all had to end, as Virginia, Alex and Fernando left home for Boston after graduation.

With critics and local music fans endlessly intrigued by their colorful, genre mashing sound, one that had at that point freshly evolved, as well as their notably high energy and wildly unpredictable live shows- Miami started to feel a musical void in their absence. But Chris Dougnac didn’t stop making music, oh no, in fact Toad Eyes wasn’t really over at all. After multiple visits to Boston, Chris has now taken a leap of faith, trekking (well, driving) upstate to reside with his band once again, a band now renamed “Seductress”. As Toad Eyes had been a staple in the Sweat Records/Churchills community, I chatted with Chris to get the lowdown on this musical, and geographical transition.

When bands change their name, it’s always a bit risky-especially if your known by people other than your Mom and ex-rocker Uncle. But in this case, Chris and the gang had good reason; “About a year into being Toad Eyes a friend of mine told me about Frog Eyes from Canada. I was very upset. I cried for hours. Then a couple of months ago I discovered that we were the same band; 3 dudes and 1 chick with bangs. I was even more upset. I cried for days. Toad Eyes as a name has been working against us; it is too damn similar. I had no clue!” But the change in name goes further than just a title, Chris believes the music just isn’t Toad Eyes anymore, explaining that “It’s been a lot of fun (Toad Eyes), but it just reminds me too much of being 16. Even the songs on ‘Omnipleasant’ were from when we were 16. We have a lot of new songs that were going to be Toad Eyes songs that are much more mature and honest…Even when we were playing them with Toad Eyes I felt like these songs were just too good to be Toad Eyes.”

Chris seems to be very sure of what he intends this new musical venture to be,

“I want Seductress as a band to tell a story with the music. There is a great story behind Seductress. Toad Eyes taught us a lot and got us to where we are now, which is where I think we all want to be.” and “I want to maintain the same in-your-face mentality that Toad Eyes had with out playing loud and fast punk rock music. I want the stage show to be simple yet in your face and let the music almost act like narration.”

An example of what Seductress may be sounding like, is the demo entitled “willow dewisp smith” that Chris released with the help of other Miami musicians. “I like the shit resolution and quality of AM radio. With the demo I did for “willow dewisp smith” I tried getting that. The song’s title is a play on the term will-o’-the-wisp, which in old European folklore is a strange light that would lead travelers away from the beaten path. I imagined being lost on a highway and being abducted by aliens. A silly image but I think the song is successful. The song is a good indication of the attitude I want to have; whatever happens happens. I don’t take myself too seriously.”

Here at SFMO, we are all excited to hear what will come out of Chris’s reunion with his fellow bandmates, and follow their progress from our relative distance. But how long will Chris be gone? Is this permanent, and will we be unable to call Seductress a semi local act? “I honestly don’t know. I am supposed to come back for school. There are a lot of things that are up in the air. I know that by the time I’m supposed to come back in August, I want to have a finished album and MA resident so I could possibly stay. I’m gonna start playing keyboards with Ice Cream as well. I might go live in New York with them for all I know. All I know is I want to spread myself as much as I can and work hard demoing and distributing musical oddities to have a finished album that I will be happy with by August. I’ve been fairly un happy with Toad Eyes recordings and thats changing with this project for sure. Seductress will sound right.”