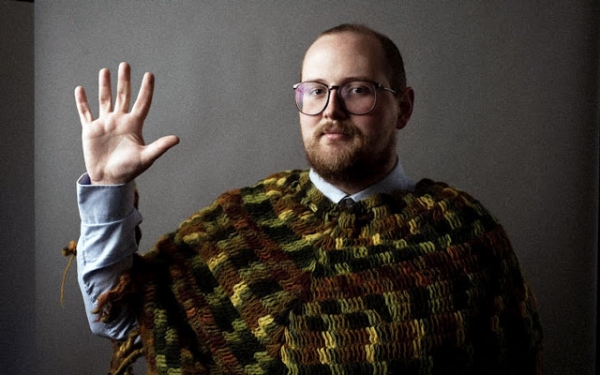 Sporting the sort of spastic ubiquity and ornate textural flourishes that reveal layers of complexity that only reveal themselves to greater and greater degrees with each subsequent listen, the music of Baltimore-based composer and electronic musician, Dan Deacon can be called many things, none of which would serve to address its incomparability to anything else. It’s the sort of sound that engages and involves the listener, as a tumult of break beats, synths, and other assorted electronic blips and beeps play against distorted, high-pitched, almost cartoon-like vocals that are often chanted.

In career spanning nearly a decade now, the 31-year-old Deacon has accrued what one could aptly describe as a cult following, generating substantial word of mouth off of his first two commercially distributed releases, 2007’s Spiderman of the Rings and 2009’s Bromst. Deacon’s subsequent follow-up to the latter, entitled America, is his first release on Domino Records.  In describing the impetus for conceptualizing America in the form of his signature soundscapes, Deacon alluded to most of the music as being “influenced by geography or travel…specific locations…I started thinking about that, and then lyrically a lot of the themes are about anger and frustration with the current system and identity issues, so America just seemed to be the most accurate title.”

While America sees Deacon begin to embrace more in the way of conventional instrumentation melding harmoniously against the electronic noise that has become his trademark, there is also the sense that his music has evolved alongside his persona and has come to reflect his shifting preoccupations as an individual: “when I was making Spiderman of the Rings, I was a pretty insane asshole…wanted the world to end, and I was working like crazy, not really having any regard for my future…realized the world was totally fucked…and then I started to realize that that was escapism. I didn’t want to have that focus in my life and work, and I tried to be more positive, without being ignorant of the fact that there are huge things that are fucked up; but you know, I guess I just know that world is going to end, I just don’t want it to anymore. I don’t think the world is going to end in a couple of days, but the thought that it could is insane.”

Along with this shift in his attitudes, there have also been great strides being made in continuing to add new levels of innovation into his live show, namely in the form of a recently completed application that synchronizes with the audience’s smart phones, allowing them to manipulate different aspects of the performance from their mobile device. On the process of developing the app, Deacon stated
“I was composing a piece of chamber music called ‘Take a Deep Breath, where the audience was the ensemble, and I was trying to come up with ways that the audience can make sounds without actually moving, and I just started thinking, ‘well the audience has phones…the growing majority have smart phones which is intelligent lightning in your hands with a sound source that you can control remotely and when the idea started to get a lift it became exciting, and I wanted to make sure that we can get it done by this tour. We spent a couple of months, me and the main programmer, Keith Lee would get together with some friends like once every week and just hash out ideas. We were thinking ‘what if you’re at a festival with no reception’…kept streamlining the java patch and we decided to have it all [functionality and synchronicity with the songs being played] in the app so that there was no data transfer, so it works just about anywhere.”These refinements enable even more participation in a live show that had already embraced the participatory element in ways that few performers have been able to replicate.

Deacon manipulates the audience, much like any other element of the music or performance; feeding them commands that can result in such acts as synchronized chanting, running, bowing, or the like. Oftentimes, Deacon may be among the crowd, rather than on stage, in the instances in which he isn’t accompanied by his ensemble of musicians, who lend their instrumentation to Deacon’s frenzied beats. While it may seem like a drastic departure from the conventional understanding of what a concert should be, Deacon describes the evolution of his live show as “sort of an organic process that happened more and more. I was playing huge sets and I’m improvising on top of all of that to some degree and it just started to drive me insane and I wanted to have a constantly changing element of the set, so I just started working with the audience more, because the audience was different every night. I just wanted to explore what to do with the audience and then suddenly I realized that I had become obsessed with it [conducting the audience]. If you think of the audience as an element of the room itself, as another element of the composition, yet they’re actively creating something…it’s fun, and it’s insanely rare that there are people that don’t want to get down.” Indeed, Dan Deacon seems to possess a rare gift, and it’s his ability to gauge the collective energies of his audience and to subsequently center his efforts around manipulating those energies in such a way that it melds symmetrically with the music he plays. He is a visionary who makes music outside of the confines of convention and of tradition.