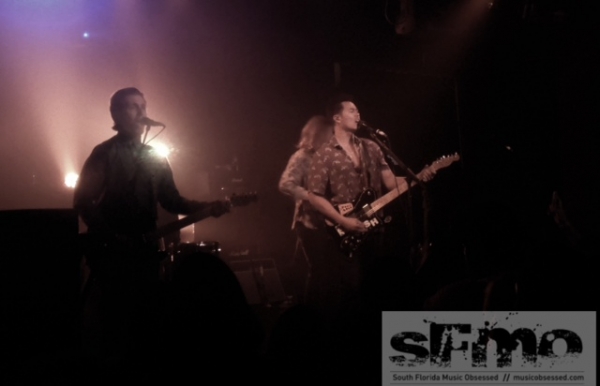 Melbourne-based indie rock ensemble, The Temper Trap, arrived at Downtown Miami’s Grand Central having delivered two full-length recordings that showcased both tremendous talent of their vocalist, Dougy Mandagi, as well as their abilities as a cogent, adept ensemble, capable of eschewing their many influences with an understated grace and simplicity. While the band veers into occasional flourishes of derivativeness that stymies their ability to establish themselves as singular talents, their abilities as a live act are glaringly apparent upon seeing their performances. They summon fans from disparate walks of life, and it showed not just in the magnitude of the turnout they managed in their Miami debut. The room brimmed with the sort of activity that isn’t typical of a Sunday night event. Perhaps even more surprising was the group’s appeal to men. Their songs are rife with sentimentality and are clearly the outlet for Mandagi’s cathartic whims; something you wouldn’t assume would be compatible with standard Miami machismo. You’d be assuming wrong. The men were equally represented alongside the ladies, who swooned at the undulating tonality of Mandagi’s emotive croon.

The band unfurled an electric set of songs that drew equally from both their excellent 2009 debut, ‘Conditions,’ as well as the self-titled 2012 sophomore release. The most impressive aspect of The Temper Trap’s music is the manner in which the backing band can complement Mandagi’s tremendously versatile voice with their mellifluous instrumentation. The guitars wailed in unison with his soaring falsetto as the keyboards chugged out their charming melodies in the wake of the pounding rhythm section, which many of the band members, including Mandagi, took turns in assisting. The front man even wailed on his own freestanding drum set at one point in the set, taking the lead on ‘Drum Song, ‘ as a segue into the encore. It was certainly a palpable highlight in the performance, as the vocalist looked much like a man possessed, banging with primal ferocity on his drums as the band jammed in unison.

The frosty stage lighting shrouded the stage in a smoky veil that sent a glimmering, frosted shadow through the expanses of the venue. While the tonality of their material may seem decidedly monotonous at times, the chameleon-like abilities of Dougy Mandagi’s voice do serve to infuse an element of novelty into their repertoire, as he can ceaselessly alternate between his deeper register or gracefully unleash his towering falsetto onto anthemic tracks like ‘Soldier On,’ or their signature song and the final track of their performance, ‘Sweet Disposition.’ It was an intimate experience that was only complemented by Mandagi’s affable presence on the microphone and the chemistry between the performers on stage. They had the look of a group that enjoys the music they make as much as they do performing in front of their adoring fans.