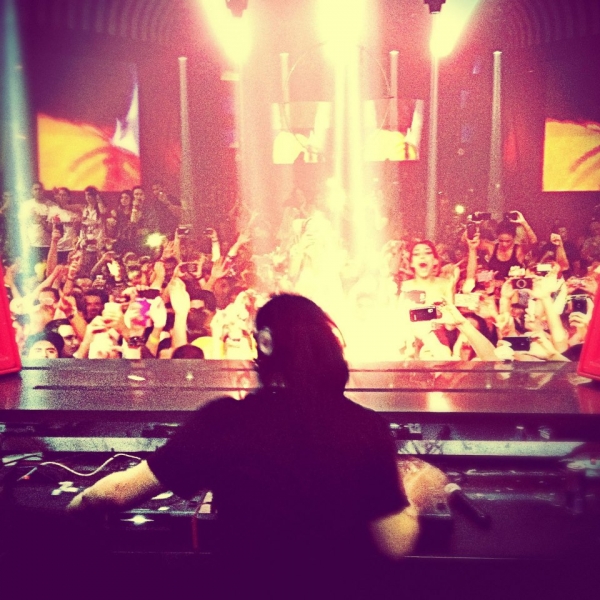 Recording under the moniker, Skrillex, Sonny Moore has established himself as not only the face of dubstep in North America, but also as one of the most widely-recognized figures in Electronic Dance Music, garnering multiple Grammy wins and consistently playing to capacity crowds in every corner of the world. Making his first Miami appearance since playing the main stage of Ultra Music Festival this past March, Moore graced the booth of South Beach mega club, Mansion, delivering a truly unhinged performance to the sell-out crowd that greeted him. The sweltering heat rose like a current through the air, glazing the awestruck patrons in a film of sweat as the walls shook, rattling in unison to the punishing bass. Where other DJ sets would feature conscious efforts on the part of the performer to alternate tempos and attempt to modulate between different soundscapes and ambiances, Moore maintains a singular, almost unflinching conviction to the relentlessness of his sound. He spasmodically jumped up and down, and shouted enthusiastically into the microphone, as he maneuvered over the decks, turning knobs and flipping switches like a man possessed.

His ability to engage the crowd came from the intensity he displayed in the booth and was, in many ways, a direct reflection of that. The ceiling lights bore down on the heaving mob, playing off of the music, as warm and cool hues cast their billowing glint in every direction, playing off the glow sticks that danced and flickered like living candles. When Skrillex commanded those in attendance to lift their lighters in the air during his signature remix of Nero’s “Promises,” an orange luster engulfed the main room, momentarily rendering the spacious dance music venue into something of a panorama rock concert. Some particularly zealous fans attempted to climb the studded metallic platform atop of which rested the DJ booth, hoping to catch a closer glimpse of Skrillex, or in most cases, simply scream at the top of their lungs as he ran through a two hour set composed largely of his own material.

Unlike many gifted producers who tend to utilize their own songs in their performances, Moore excels by maintaining his up tempo pacing, throwing in the occasional slow, ethereal track, as well as playing to his strength as a purveyor of moombah and grimy hip-hop sounds. He always manages to plug his signature productions such as “First of the Year (Equinox),” “Scary Monsters and Nice Sprites,” and “Bangarang,” while never having to repeat tracks or become tonally stagnant. The dance floor was densely crowded, affording little in the way of breathing room, yet it bounded, swayed with a life of its own, sentient, self-aware and totally cognizant of the music that blared with blistering force. Performers dangled high above, slithering through rings suspended from the ceiling, performing acrobatic feats that only lent to the already tremendous production value evident in the lighting and sound system that flanked every crevice of venue with a torrential downpour of stimuli. Perhaps the best way to frame the evening in retrospect would be with this entirely rhetorical query: what better way to experience the music of Skrillex than in a blinding flurry of light, bass and confetti? It’s the sort of question that is best left to a hearty imagination.