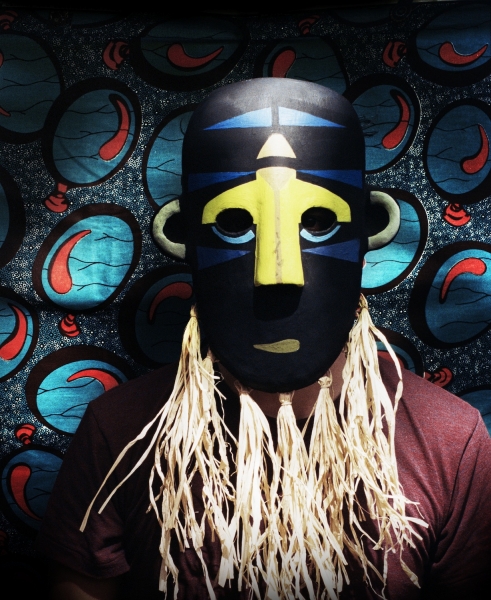 Last Friday, Grand Central hosted SBTRKT, (pronounced as “subtract”), the stage name of Aaron Jerome, a London based producer/musician who blew up last year after his debut album received worldwide acclaim. Additionally, he has remixed some of the world’s finest like: M.I.A, Radiohead, Modeselektor, Basement Jaxx, Mark Ronson, Underworld, Goldie and the list continues. One would think that with this much success the man would finally take off his African mask, but he refuses. He asserts that it doesn’t matter what he looks like, what matters is the music. In fact, his name is an alias used to support the concept of anonymity.

According to an interview with SBTRKT conducted by Arielle Castillo, a contributor for Salty Eggs, “Performance is performance. I don’t necessarily feel it’s a social thing, you know? It’s just a way to showcase what I do, but in a different way, other than just making music and releasing it,” he says. “I’m able to perform in live clubs and do shows without being spotted. I can go to a show and then leave, and no one can hassle me or spot me in the crowd before or after.”

Well we may not be able to spot him per say, but his music is telling. A dead giveaway.

The SBTRKT signature flavor includes: experimental dubstep with tastes of two-step, UK garage, hypnotizing RnB vocals, and elements of Chicago house. This amalgamation of sounds attracts an eclectic crowd as I duly noted at Grand Central last Friday. Opener Mike Deuce really got the place hyped, playing a mix of hits and remixes with genres spanning house to hip-hop and dubstep. When a remix of The Beatles “Get Back” blasted through the speakers shortly before 1 A.M., the crowd erupted into cheers. We knew it was almost time for SBTRKT to take over the decks.

We waited in anticipation, getting lost in the fluorescent strobe lights. And then we see him, the silhouette of an African tribal mask against Grand Central’s distinct LED wall. SBTRKT wasted no time, as he opened his set with his heady remix of Radiohead’s “Lotus Flower.” From there he played a symphony of glitch-hop and experimental dubstep peppered with spellbinding R&B vocals and intermittent bleeps and bloops. Even though it was a DJ set, I was happy to hear SBTRKT play a lot of his own songs and remixes. The atmosphere was lively as everyone bounced around and bobbed their head to the heavy-set wobbling bass.

Grand Central was packed (which is hard to do because it’s so big) and there was an impressive range of demographics in the building, but most surprising was the even mix of pop kids who favor a mainstream sound and those defined as the underground resistance. We were actually getting along…and dancing our asses off. And this is because SBTRKT doesn’t have a niche market—he isn’t making cheesed out pop or obscure techno—he appeals to the masses because of individuality. It’s the reason his music is slowly filling the void between the two music spheres.