Review: Metric at The Fillmore 9/28 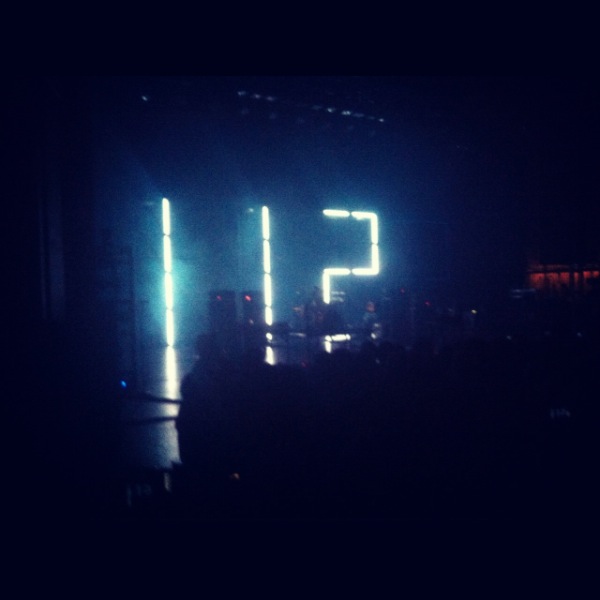 When I first arrived at the Fillmore for Metric’s show on Friday night, the venue was barely full by the time opening band, Half Moon Run, took to the stage. How many times do I have to say it, Miami?! Or, err…type it. I can’t stress enough how important it is to get to a concert at the designated time- it is always worth it! Whether you end up liking the opening act or not, at least you’ve made it a point to widen your musical catalogue- plus, they could possibly become your next favorite band! I wouldn’t be surprised if a more punctual concert goer experienced that very discovery while waiting for Metric to take the stage. And that’s because Half Moon Run commanded their time on stage, and pretty much made us all fall head over heels for their blend of syrupy guitar and heartfelt harmonies. Lead singer Devon Portielje’s smooth and soulful vocals glazed over intricate and fluctuating guitar and bass parts gives them an extremely full and layered sound, yet somehow they managed to maintain a sway-able and folksy vibe. I would inquire as to how the hell they do it, but I’d rather not question the magic and instead just soak it up, (which we did).

As Half Moon Run closed their set, there was a murmur of “I liked them a lot…” and “Damn, that was pretty good” and even some “They’re all like, SO CUTE”, from the crowd, which had definitely grown as time pressed closer to when Metric would appear. And by the time they strode onto the stage, I looked around and realized it had gotten pretty packed! With the first buzz of “Artificial Nocturne” off the band’s latest effort  Synthetica, a brilliant light show commenced. As Emily Haines began to sing, “I’m just as fucked up as they say…” the stage turned into what could easily be the set for a music video. What with the flashing lights and fan blowing wind through her hair, things got pretty cinematic. It was one of those occasions where the lights mimicked seamlessly the way the music would translate visually- and frankly, I’m a sucker for some good audio/visual synchronicity. And both aspects worked ridiculously well, the sound was pretty impeccable and filled the entire space perfectly.

At an early point in the concert, I realized that the actual musical portion of the show was well taken care of, and that not much differed from the recorded versions and how they were translated live, so that could be marked as an A+. Now what needed to looked at more was the way they acted on stage before us, since they had the noise already in the bag. Emily had plenty of confidence to spare, not at all a meek performer. She obviously knew what she had to embody as the frontman of her band, or rather, frontwoman. She was sexy, cool, (did you know she’s 38?! you go girl) and was more than comfortable on stage, which made her, as a female singer, pretty bad ass. But as song after song was knocked out, I started to question how personable she really was. At times it felt like they were almost rushing through their set. Before playing “Help I’m Alive”, which was more than halfway through their time on stage, Haines finally acknowledged us by speaking up to say how happy she was to be playing Miami again. From then on out, the crowd went pretty wild, especially during “Dead Disco”, which eventually led her to remark “Wow…I’m impressed!”- so was I, Emily, so was I.

Even with these comments though, sometime it felt as if lead guitarist James Shaw was more personable than she was, smiling at fans and generally giving off pretty great vibes. Not to mention that he was great at his instrument, and had a humble manner about him. Maybe it was because he was wearing a really cool hat, but probably not (though it definitely contributed). Haines also never interacted with the rest of her band which felt a bit off to me, and eventually turned what I commended as confidence, to a little bit of cockiness too- but hey, that’s kind of a rockstar thing.  During the last song, “Gimme Sympathy” played solely by Haines and Shaw, she saved herself. As Shaw played the intro chords, Haines awkwardly said goodbye to the ecstatic crowd, seeming overwhelmed by their unhinged praise. She almost looked reluctant to close the show. And then it became evident to me- she wasn’t unfriendly or antisocial, she was just way better at communicating through performance rather than conversation and onstage jargon or banter. During the performance of that song, she seemed almost shy and unable to quite vocalize her appreciation. And you know what? That’s perfectly fine. Then, the rest of the band joined the two onstage, and the entire venue sang along to the song’s closing lines, “You’re gonna make mistakes, you’re young. Come on, baby, play me something like, Here Comes The Sun…”

One Response to “Review: Metric at The Fillmore 9/28”

Resounders — SFMO Review of Metric at the Miami Fillmore says: