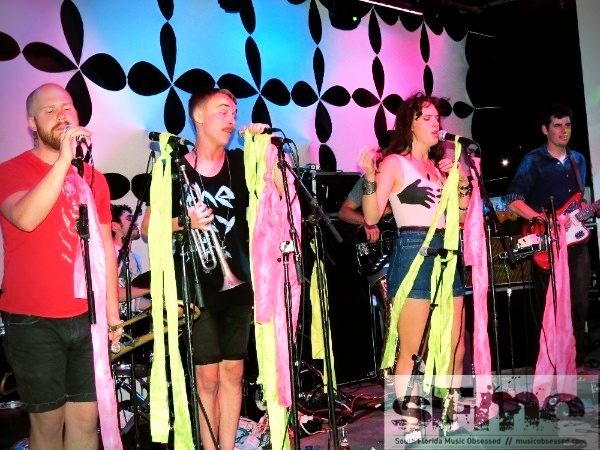 Whilst chatting with Kal Traver of Rubblebucket over the phone, she told me about a time when the band got their phones stolen while out on Miami Beach at night. Besides that, she said, they love Miami and cherish their time there. Hey, lucky us! If there’s one thing I’ve learned about being an avid music fan in a place like South Florida, is that we have to really cherish when great bands find their way to us- because  surely not everyone will (ugh, screw you geography!). So yes, South Florida, this Thursday at The Funky Buddha, and Friday night at Bardot will be one of those instances! Rubblebucket are making their way back to us, and since  their last appearance in our parts, they’ve released a new EP called Oversaturated - and a bunch of other awesome things have happened too. Throughout my interview with the giggly and charming Kal, we discussed some of those awesome things, as well as just what goes into making Rubblebucket who they are.

One of the more distinctive factors in setting Rubblebucket apart from the rest, is the artistic quality that their live show, music videos and general vibe gives out.

“Our first few shows we were just trying to get through the music, but then over the past few years we’ve been adding more and more elements like music videos and we were just trying out different things. Like, we had these giant robot puppets for a long time that were just really fun. I guess I see it as a force for different kinds of expression and I’ve always really enjoyed working my visual artist self.” Later, when trying to make sense of who Rubblebucket are as a band, more talk on imagery came up;

“I don’t know why but…the neon scarves…When I think about who we are musically, I think of them, because when you see photos of us they’re always there in the front. I’ve always been someone who experiences music a lot through sight and visuals. But yeah…our music sounds like neon scarves! (laughs)”

Sans the visual aspect, Rubblebucket still have a ridiculously layered sound that is brought about by their many capable musicians. Though she was a music major in school, Kal expressed that it was with her band that she’s learned the most. “I’ve learned so much more than I ever did in music school. I learned about managing a business, and just about art in general” and “We all push each other musically.”

Though Rubblebucket’s music is plentiful and rich, their influences are scattered and varied. “I wasn’t really into any Rock n Roll before I left college, I was just such a jazz person. I loved it. I just thought, “Oh that’s not for me” when I thought about Rock n Roll, which is really silly cause now I know how wrong that was.”

Wrong you were, Kal! But one thing she doesn’t slip up on, is her innate ability to understand her music and how it is supposed to come together. Her songwriting is never forced, and comes from a very natural and raw state. “A lot of my concepts have just started with, a musical theme. Like an idea of an arrangement I want. And then a lot of the times the way I do lyrics have been, arising from the subconscious and I’ll just start to mouth different crazy sounds and then record that. And then that is the feeling and I’ll know that there are lyrics under it and then all of a sudden, the lyrics just pop out. It has to fit with the melody for me to want to sing it.”

Singing is one of the many things she labored hard on while working with the producer of  Oversaturated, Ryan Hadlock. On working with the producer, she raved “It was so incredible. He’s just so smart and his ears are amazing and he’s got techniques that I had never seen! I had been recording for a long time, and just the way he recorded vocals…he made me do a million takes and he really knew what he wanted. We’d go through all the words and then talk about the feel of it, and he really worked me hard and no one’s ever done that before, and I’m glad because I think the results are really cool”

And we agree! Rubblebucket’s newest EP is dynamic and colorful- almost as colorful as the band members themselves. They’ve been endlessly applauded for their live performances, which are full of life and energy and passion.Frankly, it’s pretty hard to not be in a good mood while surrounded by Rubblebucket and their music.