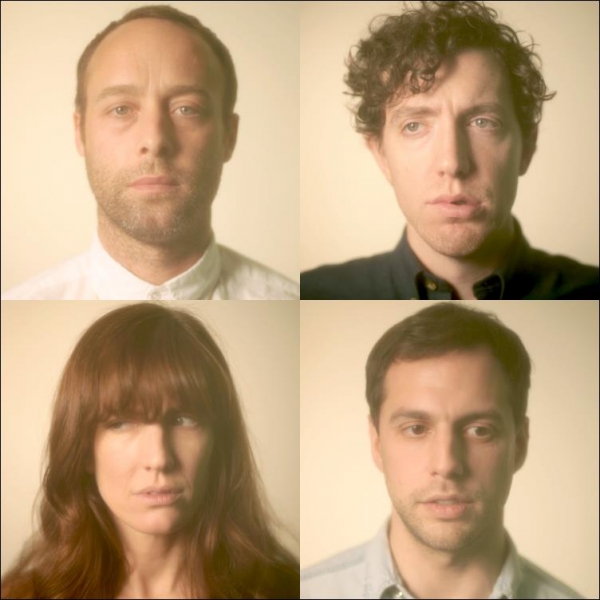 This will probably be my third time expressing a fervent plead to all Miamians to arrive on time to catch the opening band of a show. I apologize for sounding like a broken record (actually, no- I’m not sorry) but until I see a measurable difference in the supporting band’s crowds, I’ll just keep nagging. But this time, I’m going about it differently. Instead of complaining in a review, we decided to talk to Here We Go Magic, the opening band for Andrew Bird, to get you all familiar with the AWESOME band you’ll see when you get to the show ON TIME. Their latest album,A Different Ship, was produced by Nigel Godrich-who is often regarded as the “sixth member” of Radiohead- and is a clear maturation from the earlier releases. I talked to their lead singer/guitarist, Luke Temple about the album as well as videos and touring. So get to know Here We Go Magic, set your alarms right and be punctual! Even Thom Yorke showed up for their set at Glastonbury, and he loved it! If a rockstar like that can be on time, so can you Miami.

It seems to be that a lot of the initial writing processes commence while the band is traveling, far away from your homes in New York. What do you think it is about traveling that awakens such a creative flow for you?

Luke Temple: I don’t know if it’s traveling as much as just deciding to create something when we have a minute to spare. I personally feel frustrated with how travel gets in the way of creativity. No alone time

Something that stands out for Here We Go Magic that goes beyond just the music itself, is your impressive catalogue of quirky and thoughtful music videos. How involved are you in the making of them and how do the concepts come about?

Luke Temple: We have our friends Nat Johnson and Greg Mitnik do mostly all of them, it’s collaborative but they generally run with it. We just share the same sense of humor, be it dark.

From Pigeons to A Different Ship, there is an evident and great evolution and growth of style. Do you think you were aware of that growth as it was happening, or was it more visible at the end?

LT: I knew there would be a tangible growth because we had been a band longer and played better with each other. What it was specifically didn’t reveal itself till the end.

Had you not gotten the opportunity of working with Nigel Godrich on A Different Ship, how do you think your third record would sound like?

LT: Would have been more deep south bounce I think.

Much of your most frequent praise is that of your live performances. What does performing live mean to you, and which performances have been your favorite up to date? What made them significant?

LT: Hard to name only a few, there have been so many. I think our music is powerful live because we tend to improvise so there is a sense of urgency.

In the contex of your latest video, Hard To Be Close, if you were stuck in an elevator with two other people, who would you wish them to be?

Purchase tickets to see Here We Go Magic and Andrew Bird at The Fillmore on Monday, October 8th.

One Response to “Interview: Here We Go Magic”

whoah this blog is excellent i love reading your posts. Keep up the great work! You know, lots of people are searching around for this info, you can help them greatly.