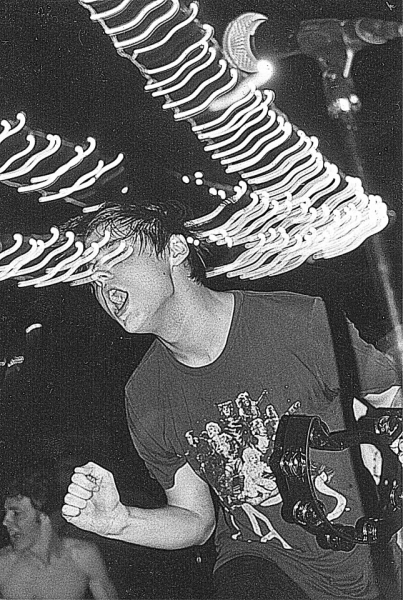 So before I really delve into this one, I’d like to preface it with a little rant. I don’t think I’ve ever been so annoyed by “catchy” bands before. Floating around the tangles of the internet are hundreds upon thousands of bands, scratching and gnawing their way to the peak of the blogosphere’s pyramid- a scale, I feel, that is becoming entirely based on what is hip, and what is catchy. And no, I’m not saying that these songs are SO terrible, it’s just that when it comes down to it, half of them probably could’ve been written by the same dude in that one band. Things are becoming pretty interchangeable, you know? I needed an antidote, a counteractive force to make things tangible again. Who would have known that it would take a year and a half old punk band from Athens, Georgia to wake me up from my stupor.

Muuy Biien is a band that started out as frontman Joshua Evan’s own self made project, but has turned into a full fledged outfit complete with four members who can really fucking play. Joshua: “I first picked up music really young, through skateboarding videos and shit like that, I got really into punk music. I bought Static Age (The Misfits) in the fourth grade and I still rank that as my favorite record of all time. I didn’t start writing my own songs until I was about 17- thats when my love for recording really started. I picked it up mainly because it was the only thing that really seemed to get me off. It just made sense to me I guess.”

It’s funny how you can just tell when music comes naturally to someone, when lyrics roll off the tongue and songs can be conjured up in one rainy afternoon. Muuy Biien are that kind of band- they are inherently fast, honest, in your face, and (for lack of better phrasing) are a force to be reckoned with. But don’t be fooled by your preconceived notions of punk music put in place by those who acknowledge the stereotype, these guys are different. A band not falling on the crutch of punk rock cliches, Joshua Evans and the rest of Muuy Biien utilize their own experiences and truths as their sole source for material;“Its easier for me to be honest that way. It doesn’t work for everyone, and I think thats okay, because if that were the case than everything would be the same.” Later, he continued,  “I don’t have any political opinion or religious message. I’m just saying that people in general are fucked up and misinformed.”

Though all of the releases thus far have been primarily Joshua Evans’ project, the band is looking forward to moving on to a more collaborative direction. “With these new songs we’re working on, the band has been writing most of the songs, with my writings coming last. They really are great too. These guys work really fucking hard. There is a huge level of respect in this band too. We all work jobs and have other things to do outside of the band, we’re really respectful of each others space- which is great.”

This Is What Your Mind Imagines is the latest album from Muuy Biien, and it comes directly from Evans’ filterless thoughts and compulsions. The album has a polished yet unapologetically personal quality to it that is like a gulp of fresh air in an atmosphere clouded with the smog of way-too-similar electro pop bands. “When Xander and I started the band february, we were extremely bored and dissatisfied in our poverty ridden home. We didn’t think anything would come out of it. Members have come and gone since then. With the current lineup we’ve been together for maybe 4 months. Honestly, I don’t care what people think. We’re not interested in others approval. We’re just being honest with ourselves first and foremost.”

Maybe it’s their lack of regard towards the opinions and expectations of others that make them so refreshing, or maybe it’s the bluntness of both the lyrics and music coming together in a seamless sort of ruckus. Maybe it doesn’t really matter, and maybe I’m just excited about a smart punk band finally emerging after a seemingly way too long moment of silence for the genre. All I know is that of all the bands that have been attempting to break that ominous quiet, Muuy Biien have emerged as the most unfeigned and sincere of them all.