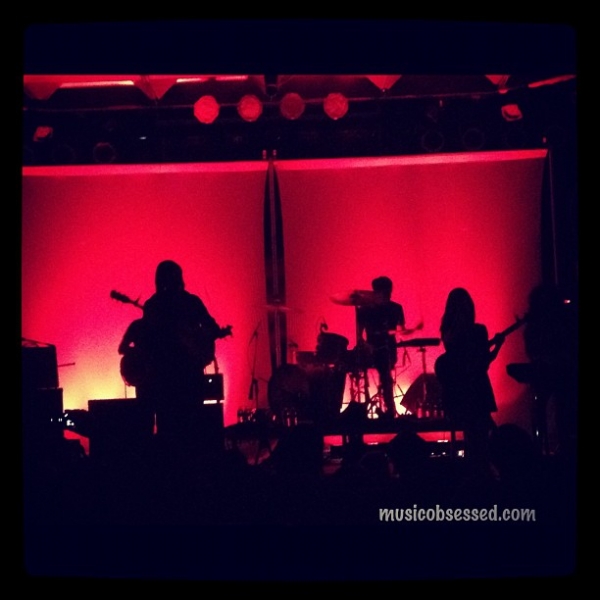 You’ve got to give Dave Longstreth the credit he deserves. Over the course of a decade, utilizing a revolving door of talent, the man has done something that perhaps only Trent Reznor has done with Nine Inch Nails: showcasing his own individual talents in the context of a band. This band just happens to have more in the way of estrogen than the latter, as any keen observer would have noticed Longstreth flanked at either end of the stage by his attractive female band mates. While staying power seems to be a scant commodity in the realm of Dirty Projectors, it does not necessarily make them incapable of playing together with a marked sense of intimacy, familiarity and effortlessness. They certainly aren’t the most technically skilled, never relying on intricacy in their instrumentation. Instead, the rich complexity of the music is exuded in Longstreth’s intricate lyricism, coupled with the eccentricities of his vocal delivery and just the overwhelming sense of oddity that pervades the Projector’s sonic milieu.

If ever there were a band that sounded as though they should be accompanied on stage by a talking dog and a gaggle of woodland creatures, it would be this one. The pungent scent of body odor melded harmoniously with the billowing plume of smoke that refracted the cool blue and red hues of the stage lights, signaling to any observer that the Broward hipster collectives were in attendance, evidenced even further by the amount of bearded men in tank tops that had flanked every corner of Ft. Lauderdale’s Culture Room.

The youth and vigor of those in attendance was duly noted, as there were few people visible that appeared to scrape beyond their twenties. This speaks to Dirty Projector’s ability to appeal to a younger demographic while compromising little in the way of artistic merit. The jangly percussion echoed forth from the stage as the keys intermingled with the largely improvised riffs that provided the framework to the cerebral lyricism showcased in Longstreth’s verses. Amber Coffman’s voice resounded beautifully as she belted some truly impressive notes on the songs “The Socialites” and “Stillness is the Move.” The ensemble actually looked to be at their best when Coffman took the helm on vocals, showcasing not only her stunning good lucks, but her tremendous range as a vocalist. Longstreth mused in one of his asides on the microphone over how it had been a considerable amount of time since the band had last played in Florida, and the audience seemed every bit as enthused as he was to be there.

Their set was somewhat on the shorter end of the spectrum, but nonetheless afforded the right selection of songs from various phases of their catalog that has seen a progression into more and more accessible terrain with the release of Swing Lo Magellan, the band’s sixth proper release. In keeping with their touring behind the album, the thrust of the performance was geared at showcasing the strength of those tracks, with Longstreth playfully crooning “Impregnable Question,” “Just From Chevron,” and “Dance For You” in his distinctive oddball falsetto, that was made even more pronounced by the echoing cries of his three female band mates who began harmonizing melodiously in tandem with the whirring instrumentation, percussive cowbell and handclaps, rendering the feel of an improvised jam session: a welcome change of pace from the rigid insistence of other artists in replicating the precise sound of their recorded work. Such wasn’t the case with Dirty Projectors, and it didn’t need to be. They are at their best when they are on stage having fun and playing their songs in the way that suits them best, having fun and engaging the audience.