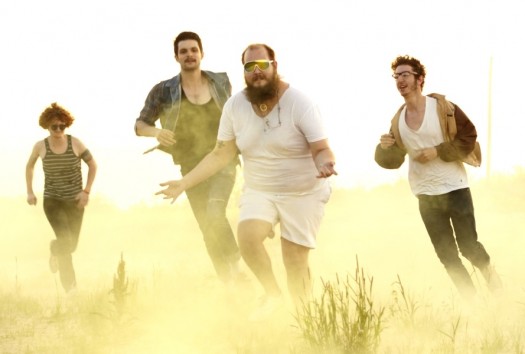 It’s playful, yet sour and bites like “LSD” Consequence of Sound likes to recall Stepdad– the electro pop concoction of college dropouts, songwriters, and producers that perk your ears in all the most interesting ways. This band is young and has carried Fitz and the Tantrums, Passion Pit, in addition to Rubblebucket while promoting their own brand ranging from Canada to Florida. Stepdad’s sound is a listen that is ever changing due to it’s bi-polar songwriting and melody. Still with the genre that is electro pop being attacked and infiltrated by bands– it’s important to understand how a sound like Stepdad’s becomes heard and listened to across the country.Subculture sat down with Stepdad and talked not only about their upcoming debut LP release titled Wildlife Pop, out June 12th through Black Bell Records, but what they think of their audience, genre, as well as the foundation of their sound.

With Wildlife Pop nearly out to the public, due to streaming of the album via Bandcamp, Facebook, Myspace etc, how do you feel your audience has taken the material?

Ryan McCarthy: The public’s response has been overwhelmingly positive. We didn’t know how it was going to be received by our fans since it’s such a departure from our first EP. We were pleasantly surprised and a little relieved.

The genre and sound that is “electro pop” has most definitely infiltrating the music industry, yet how does a band like Stepdad step out of the saturation?

Ryan McCarthy: By not labeling ourselves as “electro pop”. That shit makes me cringe

What does your tour look like for the release of  Wildlife Pop?

RM: We just finished the Vans Warped Tour, which lasted most of the summer. Next we’ll be heading out with Rich Aucoin for a month and a half tour of the states and Canada.

With Stepdad’s continuous moves about the United States— Chicago, Grand Rapids, and finally New York… where would you say the album Wildlife Pop found it’s inspiration and sound? Why?

RM: The majority of Wildlife Pop was written in Mark and I’s apartment in Grand Rapids. We actually wrote a lot of the Wildlife Pop material while we were writing Ordinaire. We knew we had songs that would fit on an album that was more of a complete musical picture, so we kept setting those ones aside for Wildlife Pop.

Stepdad’s sound has been described in a variety of different ways and by many… how would Stepdad describe their sound?

RM: Just “Pop”. Simple as that

Recording for bands can be a nightmare, what were some of the challenges faced by Stepdad?

RM: Recording is never a nightmare for us. The studio is our comfort zone.