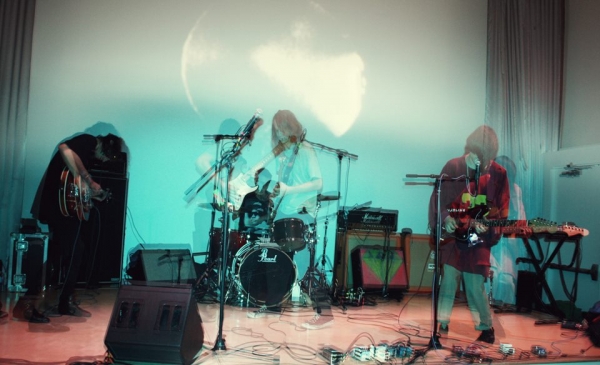 With so many bands floating about the blogosphere, with SiriusXM stations and Spotify Radios, it can be tedious to weed out the awesome from the average. The internet spouts out band after band as quick as the fastest Wi-Fi network, we can forget what goes into (or rather, SHOULD go into) making a great band who they are. The factors are endless, but it is the bands who recognize that and ultimately confront that with their own style and thoughtfulness who end up on top. And with that I present to you, DIIV. DIIV, whose debut album, Oshin released June 26th, is the lovechild of Zachary Cole Smith and his adoration for layered guitars.

Completely entranced and totally wooed by the album’s melodic and effortlessly narrative, cohesive sound, we jumped at the chance to talk to Cole Smith the man behind the music. With an, as he put it, “built in audience” from Beach Fossils, a band he played in but never wrote for, and a connection to record label Captured Tracks, DIIV’s take off was a bit of a double edged sword. On one hand, he says, it was a great help in getting the band off the ground and developing a following, on the other, he doesn’t want to be known as a Beach Fossils side project- because that’s not what DIIV is. DIIV is it’s own band with it’s own sound- plus, Cole never wrote for Beach Fossils and describes it as simply helping his friends out.

With every (good) band, there is an accompanying sound and identifier that will make them stand out from the rest. In the music video for “How Long Have You Known”, Cole is seen taking apart different objects and throwing them into a blender. It has to do with what makes those objects what they are, so I asked him to do the same for his music- deconstruct it and isolate just what makes DIIV the band that they are. “I guess it would have to be the guitar. It’s really…it’s true that a lot of the emotional weight of the band and a lot of the really expressive parts of the songs come from the guitar melodies, and the way that two guitars work together. That was always kind of the intention of the band, to have these two interplaying guitars. The music isn’t really there to support the lyrics, it’s more that the vocals are there to add texture to the guitars.”

That textural sound is heard throughout Oshin, and is a quality that prevails in making DIIV an “album band”- to be taken in as a whole rather than through fragmented singles. The way a band is received nowadays, in both the literal sense and figurative, became a hot topic of discussion throughout our conversation- especially the effect of the Internet. “It does affect it, it affects it a lot. You know, making a record and knowing that people are going to hear it, and especially knowing WHO is going to hear it and knowing your audience and knowing WHERE they’re going to hear it and what venues you’ll be playing…knowing who is going to hear your album and HOW they’re going to listen to it, I mean that all affects it. And I think that’s part of the art and being adaptable.I think it’s really interesting.”

When a band garners attention from solely their debut album, the release of a follow up can either make or break them. Either a band will evolve and rise to the occasion, or they will buckle under the pressure and produce an album that parallels their first. These are factors in the music world that Cole is very aware of and is prepared to face. “You know, I want to have a record that can reach out to a little larger audience than we found with this one. You know, not just people who like Captured Tracks and not just people who like Beach Fossils. Everybody who would be able to hear the record to like the record. I wanted to make it listenable to people who like electronic music, it’s really influenced a lot by the structure and kind of the format of minimal electronic music. I’m gonna try to make it as dynamic and exciting a record as possible, you know moving in a lot of different creative directions.”

Earlier, I noted that there are many elements involved in making a band ultimately successful. It isn’t and never has been just about the music, bands can be much more than that, they can be their own experience. The sense of stepping into another world with a band is beginning to get lost in the tangles of the Internet, but DIIV recognizes the fact that having a band should be a multimedia experience. “I love when a band has an aesthetic, a visual aesthetic that kind of fits their music. And I wanted something that was kind of harking back to like, the early days of like DIY hardcore bands and punk bands who would just silk screen super simple t-shirts and album art.”

Besides their enthralling and narrative guitars that swoop around melancholically, what makes DIIV so compelling and irresistible is it’s thoughtfulness and attention to detail. Cole has a keen awareness of what makes him love a band and how to reflect that in his own music- which consequently results in a product that stands apart from a mess of genre mashing indie bands who know not of where they are going. DIIV is a band with direction and commitment to musical ideals that allow them to create their own world to share with others. It is honest, it is real, it is smart, and it is just one of the reasons that DIIV is a band to be excited about.

One Response to “Interview: DIIV”