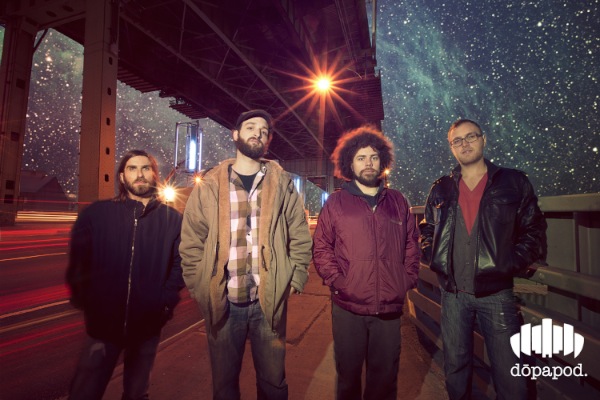 If I had to choose two words to describe Dopapod: Funk Nasty! The band first received a lot of attention from their electric performances at basement parties in Boston, and since, they have created quite a name for themselves in the past 3 years. Their sound is the equivalent to a funktronic dance party, but their sound is much more complex than that, blending genres of: funk, afro-beat, trance, dubstep and progressive rock. The band’s debut album, Radar, received critical acclaim from national publications, such as Performer Magazine, calling Dopapod members “incredibly talented musicians that have set the bar considerably high for their first full-length recording.” The band has played with some of the biggest names in the jamtronic/ funk arena, such as Soulive, Lettuce, Lotus and Brothers Past; their thrilling live performance has landed them sets at numerous festivals such as Camp Bisco, Mountain Jam, The Big Up, and this year’s Catskill Chill Festival.

What really interests me about Dopapod is that you get the jamtronica feel without using any computers; it’s all analog. Explain your reasoning behind the decision to stay clear of digital and how you acquire this electronic-jam-funk sound without it

Neal Evans: We stay clear of the digital stuff for a few reasons. One is that we don’t have enough inputs on our sound guy’s mixer for any more stuff! But mostly, Dopapod never set out to be anything close to jamtronica. We only hear that genre put on us because we have a few songs with a four on the floor beat and some synthesizer sounds. We have an old Moog prodigy synthesizer and a Korg 2500, and a few other toys. Electronica sounds are all easily achieved on these instruments, so we get into that stuff sometimes.

A lot of your live sets are improvised. Walk me through what that’s like in terms of who’s usually the lead and how you get a feel for what each other is going to do or how you’re going to jam.

Neal Evans: We generally have songs that have a long opening section that is all composed and written out. Then we get to a point in the song that we leave open to something different every night. Some of these parts or led by guitars, some by the keys, and sometimes the rhythm section. We change it up all the time, so there is no specific leader or anything.

Talk to me about your musical influences…trance? Dubstep? Those are genres that heavily rely on computers and digital aspects of music production. How do you acquire a blend of those sounds without it? And what influences in particular have contributed to this sound?

NE: We all have different musical influences. Trance and dubstep were not very influential on any of us before the band started, but we started to dabble in those sounds over the last couple of years. again, the sounds from those genres are easy to achieve through a few synth sounds and some clever turning of knobs. We have influences from soul, funk, jazz, metal, punk, rock, jam, prog, really a little bit of everything.

What most excites you about touring and playing live shows? What can the festies at Catskill Chill expect?

NE: Touring is a great way to get some travelling done and to meet some great people. It’s always fun to get  to a place you have never been to for the reason of playing music. Also, at festivals we love the opportunity to collaborate with other artists that are there, so hopefully we will get to do some of that at Catskill Chill! This year all are welcome to ride our new iGallop for any amount of time on the stage.

What’s in store for the future of Dopapod?

NE: We are recording our third album in the midst of full time touring. Our Fall tour is about to start including Catskill Chill, and some cool surprises coming up for the end of the year. See you all out there!