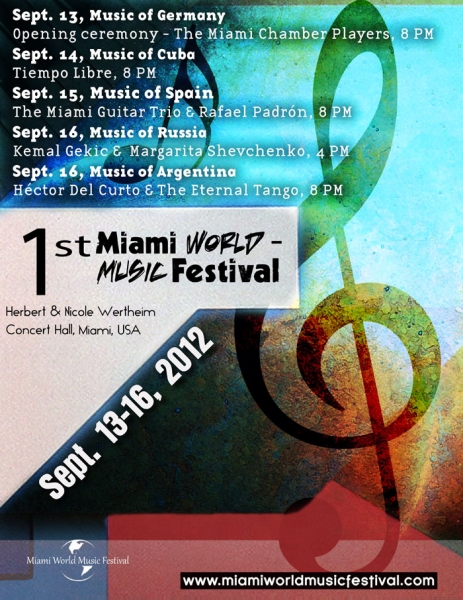 The Miami World-Music Festival was created by South Florida Friends of Classical Music, a non-profit organization to encourage and support the musical heritage of countries around the world. The annual Festival features academic, traditional and contemporary music from diverse cultures performed by acclaimed world-class artists.

The festival emphasizes chamber music written by the greatest composers of all time, and also showcases folk music events using traditional world instruments. The 2012 Festival presents five concerts representing music from Germany, Cuba, Spain, Russia & Argentina. All the performances will be at the Wertheim Concert Hall on the FIU south campus.

The concerts begin Sept. 13 with a performance by the Miami Chamber Players, a new group that will include a rotating series of area musicians. The program centers on the music of Germany, and J.S. Bach in particular, featuring two of his Brandenburg Concerti (No. 3 in G, No. 6 in B-flat). Performers include familiar area players such as violinists
Daniel Andai & Tomas Cotik, violist Viera Borisova and cellist Ashley Garritson. The program also includes the Piano Quintet in F minor, Op. 34, of Brahms, with Adolfo Vidal at the piano.

The three-time Grammy-nominated Cuban music timba band Tiempo Libre does the Cuban program on Sept. 14, and the Miami Guitar Trio, with guest artist Rafael Padron, is in the spotlight Sept. 15 for a program of music from Spain. Pianists Kemal Gekic and Margarita Shevchenko perform the two piano suites of Sergei Rachmaninov for an all-Russian afternoon Sept. 16, and that evening, the bandoneon master Hector Del Curto presents a program
devoted to the tango and music of Argentina.