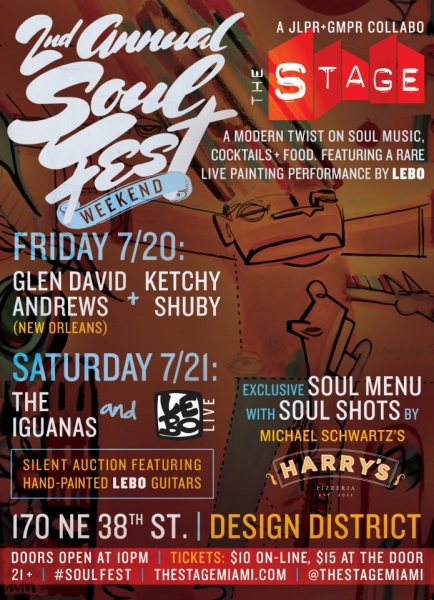 On Friday, local Miami standouts, Ketchy Shuby, will perform their “Downtown Soul” along with NOLA native and favorite, Glen David Andrews. Saturday promises to be just as soulful with The Iguanas of New Orleans whose soulful, upbeat, rock music has been notably featured on the HBO hit series, Tremé. The line-up represents a broad range of styles, sounds and influences, including a combination of New Orleans funk and Miami flavor.

Glen David Andrews is considered “one of the giant talents of New Orleans“ by New Orleans Jazz and Heritage Festival (JazzFest) Producer, Quint Davis. A frequent JazzFest headliner, USA Today calls him a “showstopper” who “rocks the blues, takes it to church and carries it into the mosh pit.” The gospel/R&B singer and trombonist plays an electrifying set and he’s not afraid to crowd surf amidst his funk-thirsty fans. His performances include everything from Down in the Tremé to a “Cajunized” version of The Clash’s Should I Stay or Should I Go.