Review: “Shut Up And Play The Hits” 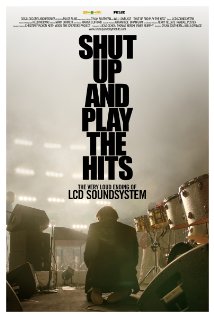 “When you start a band, do you imagine how it’s going to end?” asks music journalist, Chuck Klosterman to James Murphy, LCD Soundsystem’s musical mastermind. His face goes blank. We don’t get an answer. Instead, the film cuts back to footage of the band’s monumental last show at Madison Square Garden. The lack of an answer, or at least the struggle to find the right words was a prevalent theme in “Shut Up And Play The Hits”, a goodbye film documenting that final show and the day that followed it- all sequenced by an interview that took place just a few days before.

Not only did the film provide stunning concert footage, but perhaps more importantly it offered LCD Soundsytem fans a touchingly close up and exceedingly intimate prospect of James Murphy and the mental processes that came with his decision to end the band, along with that decisions consequences. Switching back and forth from videos at MSG to shots of Murphy making coffee or walking his dog, there was an extreme sense of disparity between the life he lived, and the life he will be living- and it all happened in just a few days.

The contrast of wild, high energy performances and flashing lights to the placidity and tremendously ordinary acts of shaving his beard or taking the subway, all came with an unmistakable sense of sadness and ambivalence. What would his life be after LCD came to an end? And more importantly, was it the right decision to end it in the first place?

There was a revelatory moment when Chuck Klosterman asked Murphy what he believed LCD Soundsytem’s biggest failure was. According to James, he fears the most grave mishap was the decision to call it quits. As he tried to locate his feelings and vocalize them, the musician would go on cycles of introspection and self reflection, all triggered by Klosterman’s brilliantly knowledgable and mentally stimulating questions. Listening to the restless uncertainty in his voice as he made an effort to remember and grab a hold of that initial reason for departing and it’s legitimacy, he seemed to be in a quandary with himself and what he was manifesting his future to be.

The juxtaposition of hearing what Murphy thought his life would be like after the show, and what we SAW of that life, reminded us (and him) that nobody really knows what lies ahead, even if you planned it all to happen. But in both views of that day after, past and present, there still lie an air of, indecision even while it was happening.

What set this film apart from other rockumentaries and concert films was not only the personal view we get of James as his days as a musical deity come to a close, but the beautiful visuals that not only conveyed that sense of intimacy, but displayed the enormity of LCD Soundsystem’s music and it’s impact on it’s fans. The film wasn’t shot by photographers who regularly record big shows, but rather by directors of photography coming only from a film background, like Spike Jonze. With numerous cameras about the venue, each photographer captured moments that stayed with us and visualized the influence that great music can have. From close ups of an inconsolable fan who seemed to be crying throughout the entire show, to panoramic views of a giant wave of fans dancing uncontrollably and belting out each lyric.

The visuals reminded us how important music can be, and it’s unquestionable ability to bring people together. Watching the concert footage, it showed us that in a night, 20,000 people can become one when you have the right band playing on stage. Though the sections of the film dedicated to his interview were extremely significant, the concert showed the weight and seriousness of the band in a way that could not have been seen otherwise- through the heartbreak and unhinged energy of the fans.

There was a moment in the film that I considered a vital breakthrough, and was definitely one of the most touching moments in the entire film, or possibly the entire band itself. Visiting the musical equipment and gear a day after the show, James Murphy begins to cry. It was a moment of vulnerability and distress, and showed that even as controlled of a breakup it was, it was still a perplexing and difficult decision that comes with his own questions as well as those of Klosterman. But in that sense of worry and possibly regret, we are given a sense of reassurance that we find in Murphy’s lack of it. Perhaps we will never grasp exactly why LCD Soundsystem had to be ended now, but with what we get of James Murphy in “Shut Up And Play The Hits” we know that we are not alone in that uncertainty.