Review: IndepenDANCE at The Surfcomber Hotel 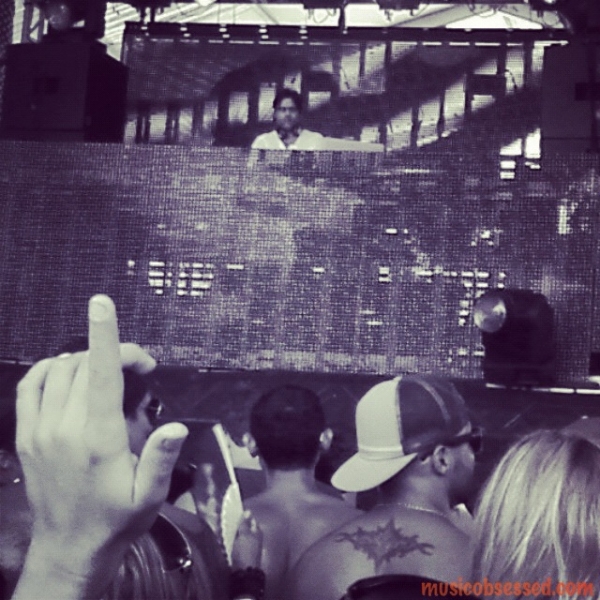 The sun bore down, ratcheting tumultuous volleys of radiant heat that buttressed the sweltering cloud of vaporous humidity enveloping the spacious expanses of the Surfcomber Hotel’s opulent pool area. The landmark South Beach hotel played host to Go Big Production’s eighth annual IndepenDANCE pool party – an event that has continually drawn some of the premier names in electronic dance music. This year’s installment saw local acts Louis Puig, Cocodrills and Patrick M, share the stage with established and rising talents, Savoy, Wally Lopez, Norman Doray, Funkagenda and trailblazing veteran Roger Sanchez. A swarm of conspicuously-muscled, flagrantly affluent party-bros ambled in shirtless glory in various states of intoxication, flanked at every end by gorgeous bikini-clad beauties, while toting around $55 pitchers of mojito, paying homage to our nation’s independence in quite possibly the best way any Miamian can – partying with reckless abandon, while synthesized beats permeate the sweltering heat. While the venue brimmed with life, it never became overwhelmingly cramped, always affording the opportunity to move around and dance with relative ease.

The demographic for those in attendance was at the younger, physically-fit end of the spectrum, yet the ambience of arrogance and the corresponding lack of manners that typically accompanies such a crowd was absent, instead supplanted by a pervading sense of community and humility. People seemed to genuinely be enjoying one another’s company, and it only bolstered the tremendously epic ambience established by the adept talent showcased on the control decks. The main stage was an expansive canopy that shaded the bold partygoers who had forsaken the comfort of the swimming pool for the compacted dance floor that had formed there. Plumes of cooled water vapor shot from cannons placed on either side of the improvised dance floor, as large LED-lit panels projected patriotic imagery or mirrored the performer on stage, as they manipulated the control deck.

The track selection for the artists, taken collectively, was among the most refreshingly obscure that one could hope to encounter in any event of a comparable scale. It became glaringly apparent that this was precisely the intention, when Funkagenda jokingly dropped Avicii’s crossover smash “Levels,” only to wave his finger as a proclamation of disdain, as he immediately cut into another track. Incidentally, it was the latter, in addition to Norman Doray, who delivered the most readily recognizable tracks in the most compelling fashion. Funkagenda delved into his own signature track ‘What the Fuck,’ on two separate occasions, but largely stuck to a powerfully eclectic set that spanned progressive, electro, and conventional house tracks, while mixing this disparate concoction of his to absolute perfection.

Wally Lopez and local talent Patrick M delivered on the tech house, with the former in particular, shining for his ability to capture the Balearic sounds of Ibiza and transplanting them to South Beach. His charm and eccentric persona on the decks shone through in his set, as he was able to engage the crowd to no end, and was the only performer to really acknowledge them, and relish in their joy as they danced to the music. Norman Doray was the big surprise standout, as he took on a notable electro slant in his two hour set, not once showing any sign of slowing down as he busily manipulated his track selection, using his entire body on the control deck, jumping up energetically as the bass throbbed heavily, aimed directly at the crowd as they throbbed in rapturous excitement. The Frenchman donned a t-shirt adorned with an American flag, and opened up with ‘Hail to the Chief,’ in keeping with the theme of Independence Day.

Roger Sanchez, stuck to the throbbing bass of his traditional and tribal-infused house sound, it all became monotonous about a half hour into his set. The variety in his track selection was a glaring flaw in his performance, and it was only compounded by some poor decisions that resulted in some cacophonous hiccups in his flow. It was a surprise to see the headlining act ring hollow in comparison to the talent that had preceded him. The elements came together perfectly as fireworks lit the night sky, reflected resplendently as glimmering embers shone on the surface of the ocean below. The picturesque image of the audience with lit sparklers upheld over their heads as the beats poured fourth was merely just a consummation of everything that should have and did happen.