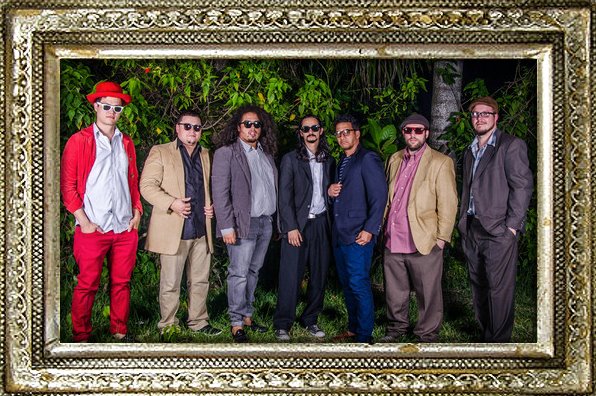 Last week, Consequence of Sound wrote a list of the most restless musicians. 21 bands were chosen, but even then one band was missing. It’s our very own downtown soul group, Ketchy Shuby. Debuting in 2009, they’ve had 5 releases since, and aren’t taking a break anytime soon. Their most recent effort is called Downtown Soul Record Singles Club, which is a compilation of covers, one of which will have an accompanying Micromovie. We were lucky enough to pull the busy musicians away from their work for a quick chat to catch up on the latest releases, their history, and our melting pot, Miami.

You are a band that seems like it’s never slowing down. What motivates you to write, record and release in such a fast manner?

Matt Pyatt: We always feel inspired to write and record! It’s always good to have something going on that you can promote as a band.

Danny Naval: Exactly! Our goal is to  keep creating new music for the public to enjoy and to inspire people to get out and support good quality music.

Charles Gardner: I think we also do it because we are creative and we need too. These days bands need to inundate people with music and media , especially if they are a growing a fan base.

How do you think that being from Miami has influenced your sound and why?

Danny Naval: Miami is a cultural melting pot thus inspiring us in so many ways! You can find all styles here in the city.

Matt Pyatt: There’s alot of diversity so we’re all inspired by different music.

Danny Naval: Miami will always be a city filled with culture and inspiration. It’s all around us!  Especially for us we breathe in all of the cultures and influences!

“Ketchy Shuby” is the title of a Peter Tosh song, what made you land on this song as your band name?

Jason Hernandez: A couple years ago I got into this crazy Peter Tosh phase and it was amazing  because I wasnt playing to much music at that time, and one day I bumped into my highschool pals Danny & Karim and we started and jamming. I thought “Ketchy Shuby” was such a great tune , I wanted to incorporate it in everything I do musically , so we named the band that. We started playing reggae initially but as we evolved, soul music has been the genre we’ve kinda grown into.

Since 2009 you’ve had an EP, and 4 full length albums released. From your debut to now, how do think the band has changed or evolved in the writing process and performing live?

Charles Gardner: We play soul music now. The writing process is pretty much the same process. We are definitely more efficient at it now. The live shows are tighter and way more exciting for us and the crowd.

Jason Hernandez: It’s nice to see kids enjoy soul music and good performance and thats what we’re all about!

Tell us about filming the video teaser for “Under My Thumb”, and how it relates to the Micromovie, “Swim Good”?

Jason Hernandez: So the teaser video (Ocean Man) for “Under My Thumb” is the teaser to this whole Micromovie for the song “Long Live The King” , We started shooting it a while back and are still filming but the Micromovie is shot by our good friends Alain & JP (They’ve shot for us before and others like , Mayday!, Jacob Jefferies & Lil Wayne) , they’re some good friends that shoot most of our stuff and we came on this idea for a video that ended up becoming its own thing you know? While we were shooting I decided to shoot a prequel to that micromovie and use the song “Under My Thumb” and that leads to the micro movie “Swim Good.”  All of these songs of course are from our newest record out entitled Downtown Soul Record Singles Club Vol.1 which is free online.

What made you decide to do an album of solely covers?

Jason Hernandez: Why Not, you know? We just wanted to release something FREE, and with meaning. So we took a couple weeks off and recorded all these personal covers that mean so much to us.Each song has it’s own personal meaning to us. Like for example “Swim Good” was chosen because of this one time we played a gig at the grove and  DJ Sharpsound  played the tune, and I can remember all of us dancing and just really taking a load off, we had the feeling of “Home. ”