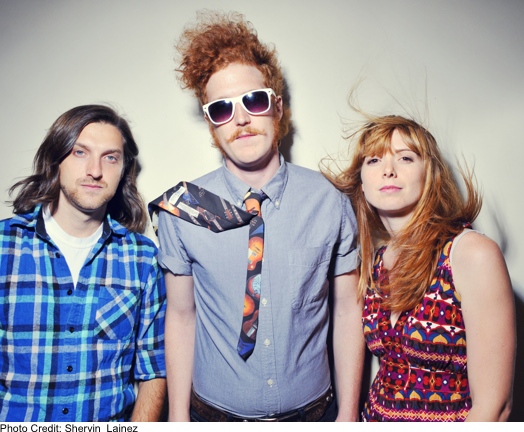 There’s something incredibly infectious about The Spring Standards, though the word infectious can easily have a negative connotation and therefore makes me doubt whether it’s the right word. I think irresistible”is the better fit. They are a three piece outfit whose genre leaps and flips about, never seeming to stand still to be quickly categorized by…well, by people like me. With an assorted catalogue of influences from oldies to newbies, they take listeners on a musical journey throughout their time and the time of their parents. Friends since high school, the fusion of their personalities is almost as melodic as their colorful vocal harmonies that remain a key part of what keeps this band rolling. They have a new double EP out called yellow//gold, so we caught up with the James Smith to discuss the album, their busy month, and how The Spring Standards came to be what they are today.

Your latest release is a double EP called  yellow//gold. Can you tell us what makes up the “yellow” division of the album, and what the “gold” section represents? Why did you decide to compose the album in this way?

James Smith: Yellow and gold are cousins. If they were characters in a children’s book, yellow would be the goody two-shoes that has his feet dangling from a bridge watching the fish jump for flies at sunset. While gold would be shooting a home made sling shot at the neighbors cat. We have always written what we want to write with little regard on what “kind” of band we are, which we love, but has made it hard to have a certain type of cohesion to an album. So with that in mind, we set out on an experiment to find an interesting “Spring Standards” way of making an album that would force us to have more of a throughline than we have had before, without taking over the ease of creativity. So we decided to make that line be at a certain point on the color spectrum. We all agreed to write songs that gravitate to the color yellow for the first of the two eps (also with the notion that it be an almost entirely acoustic album).  The Same went for gold (except with a more electric notion).  It was really interesting and so much fun to see what we each wrote. There were some conversations about what yellow is…especially when giving descriptions to people that we were working with for album artwork. It was a challenge, but a super fun one.

The reason we didn’t just chose one color and just put them all on one full length album was because we have always written a multitude of styles. It felt like we were robbing ourselves of the diversity that we love to dive into. Also, we have always loved the idea of B sides and how when you used to get vinyl, the flip side always seemed to have a slightly different feel. It felt like the artist knew you had to get up and flip the thing, so they took the opportunity in that breath to change the mood a little. It felt like it suited what we were doing to have them set up as relatives but not twins.

What makes The Spring Standards different from the previous projects you’ve been involved in?

JS: Well, we’ve always sort of been involved in projects with one another. We have had some other little things here and there (in college and side projects in NYC) but nothing that has really been a complete and utter diversion from the way that we do things in The Spring Standards. I would say the main difference from all the previous incarnations of what we do is the passion and the dedication. We love what we’re doing and believe in it, so we work really hard at it.

How do you think your music would be different had you not been friends in high school, and only started making music when you met up in New York?

JS: I love this question.  I bet we would have a lot more fights about which direction to go with what. I think because we all know each others past musical endeavors and musical history, we all have a sense of where decisions and inspirations come from. Also, it’s not just knowing each other in high school. We all grew up in the same area, with the same musical playground, which influenced us to go the direction we all went. There was a subtle folk scene where we were from, but other than that you had to drive to Philadelphia to see a big old rock show. So, you could either get into heavy 90′s garage rock, or delve back into the 70′s, 60′s, 50′s and beyond to find the stuff that you wanted to listen to. You either gave into the crowd or fought for what you liked, which was often not the norm. But as corny as it sounds, we each found two others that were fighting the same fight (**wipes away single tear**).

As a band with many influences, your sound is very diverse and often hard to classify. If you could invent a genre for yourselves, what would it be?

JS: No. idea. We get asked this question a lot and always come up with some sort of weird explanation.  But in this particular moment, I will say we are Universally-Independent-Folk-Pop-Rock. Just don’t ask that question tomorrow, or we might throw in a piece of metal.

Since yellow//gold was released, many interesting opportunities have been coming your way. From performing for the second time on Conan, to etown recordings and streaming live on a pirate radio station, what do you think has been the coolest event you’ve been involved in the past two months? What are you most looking forward to in the near future?

JS: We just finished up a tour with Rhett Millers solo project “Rhett Miller and the Serial Lady Killers”. That was a pretty amazing time if you can count it as one thing… But though the other two might say something different, I must say that Conan was the coolest. But not so much for the whole TV thing (and that we love Conan with a vengeance), but the fact that Aubrey Plaza was one of the guests that night. We all grew up together hangin’ around in the back woods of the Delaware/Pennsylvania boarder in high school. It was a pretty wild experience being on the show the same night as her. It sort of felt like the adult version of what we did as kids. We did the same thing that we were doing years ago, but for some reason people were watching us do it and it was televised. I can’t really explain it better than that…but it was surreal.