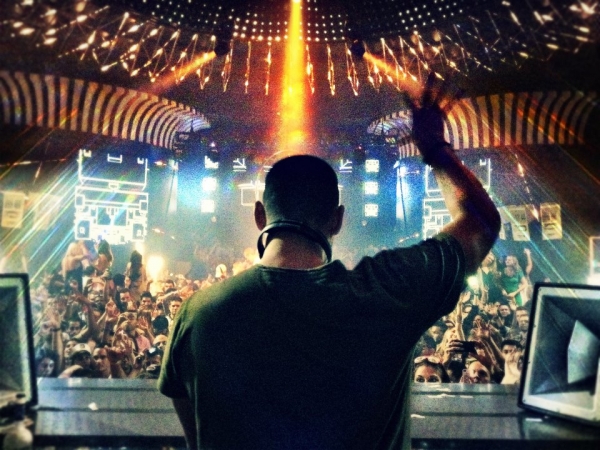 A vast space brimmed with the heat of hundreds of bodies, scurrying ubiquitously in motion, while the walls rattled in unison – reverberating so as to emit a seismic wave of sorts that caused the clothing on the bodies of anyone present rattle in like manner. Punishing beats rained down from every conceivable direction, rendering every nook and cranny of Miami Beach’s Mansion Night Club awash in a diffuse solution of sonic bliss that ultimately served as the umbilical cord through which any perception of reality was transmitted. Dutch DJ/Producer Nick Van de Wall, known colloquially as Afrojack, has attained much in the way of notoriety since the global success of his collaborative single “Take Over Control, “featuring Dutch songstress, Eva Simons. He has subsequently garnered production credits on such tracks as Pitbull’s smash hit “Give Me Everything,” featuring Ne-Yo and Nayer, in addition to charting two years in a row on DJ Mag’s annual reader’s poll of the top 100 DJs in the world. Van de Wall has toured prolifically, bringing his JACKED tour to Miami in a major way, by making two back-to-back appearances at Mansion Night Club for the first time, while mobilizing support from some remarkably talented acts in Shermanology, Quintino and R3hab.

Opening the evening on the decks was the trio Shermanology, which has the unusual distinction of featuring two backing vocalists, in addition to a DJ who mixes the tracks and sings on the microphone. In the end, the result was rather lackluster, as the two additional members who were not mixing, merely ambled aimlessly in the background, occasionally mumbling some lyrics incomprehensibly so as to appear a part of the process that was taking place on the decks. The venue began to fill to its capacity gradually, bringing with it a burgeoning sense of anticipation that mounted on itself and multiplied exponentially. As soon as stellar young DJ/Producer Quintino took control, the overall quality of the ambience on display reached infinitesimally soaring heights that receded at no point subsequently.

Alternating gracefully between a distinctively mainstream track selection and lesser known, yet entirely riotous tracks that ratcheted the intensity to a fever pitch, the roughly hour-long set was a remarkably deft display of the raw power of electro, coupled with the warbled Dutch sound. Quintino’s ability was so impressive, that to speculate over his future success would not be something entirely too presumptuous to do, for he shows all the characteristics of a star in the making. His enormously-scaled collaboration with Sandro Silva entitled “Epic,” which was the highlight of his set, is a great indication of that. The instant that Afrojack took to the control decks was marked immediately by his track “Bangduck” fading in gradually, then ascending to frenetic heights that became relentless and persisted the whole way through the set, which bordered on two hours.

The audience became a singular, unified presence, effervescent in expansive movement, set aglow by the resplendent hues of light overhead, which clashed in alternating fury. Ever the consummate performer, Van de Wall jumped atop the elevated platform from which he spun, bottles of champagne in hand, as he shook them violently, proceeded to uncork and issue forth a downpour that drenched the spectators that had encroached on the front of the booth. It wasn’t long before the pungent aroma of alcohol had filled the dance floor; emulsified further by the copious amounts of Grey Goose Afrojack had chugged freely from the bottle as the evening progressed. The pinnacle came with the arrival of arguably the strongest track in his repertoire, “Replica,” a stirring showcase of everything that makes his production so distinctive. The mixing of the tracks was a revelation – Van De Wall’s already staggering abilities as a producer are paralleled directly by his proclivity to mix a wide array of tracks immaculately. The pacing of his set ebbed and flowed with the degree of inebriation with which he performed. In the latter fringes of it, the tempo transitioned to a decidedly slower pace following the hard-hitting electro of “Prutataaa,” featuring R3hab (who also delivered a staggeringly compelling hour-long set once Afrojack departed), to a softer remix of “Take Over Control.”

The power with which Afrojack wielded the beats, manipulated them with the flip a switch, the turn of knob, was every bit of proof anyone would ever need to conceptualize the DJ as being not merely an artist, but also an active participant in the music. Afrojack brings towering charisma, a prodigious ear, and an undeniable gift for mixing to the decks, and his stock in the genre can only continue to appreciate as he accrues more experience with time.