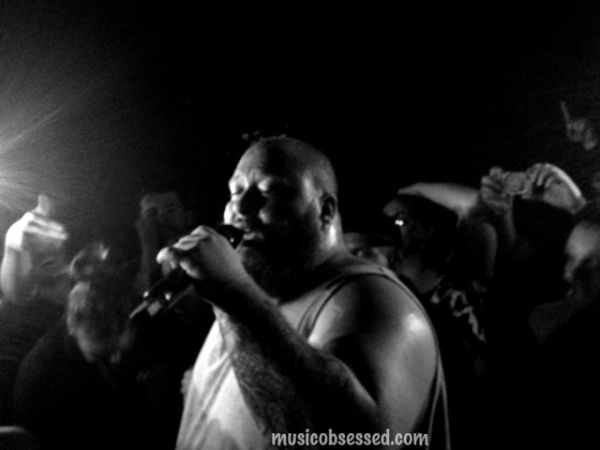 Smoke billowed freely, engulfing a heavily compacted swarm of hipsters in the effluence of medical-grade reefer, as a heavy-set, ginger bearded performer, sporting a wife beater and a head as bald and white as a cue ball, rhymed with blistering speed and dexterity on the microphone. The ambience at Bardot, aptly personified the sense of restlessness coupled with the unbridled need to placate one’s own desire to lay back, chill and self-medicate that permeates the songs of stoner rap purveyor, Action Bronson. That goes to say that everyone was in the mood to sway in place, puffing freely on the finest of ground plant matter, or chugging bravely on whatever drink was readily available.

Proudly representing Flushing, Queens, Bronson, real name Ben Johnson, has become something of an underground sensation in the hip-hop world, since making his auspicious debut on youtube videos, rapping over funk-infused samples, dug up from a bygone era, laden with Bronson’s remarkable eloquence and charisma. A chef by trade, it is remarkable to consider the heights to which he has soared, given the fact that he could overheard prior to the show, telling some of the fans in attendance of how his rapping was merely a hobby for him, he “loves cutting steaks,” alluding to his culinary background – which is a major influence on his lyricism and metaphors.

Bronson can be readily seen in instructional cooking videos he has uploaded to Youtube, and in many ways, his ability to concoct dishes from a variety of recipes couldn’t be more analogous to the multitude of mutually exclusive ideas that go into his songs – he’ll go from bitches to prosciutto in a second, flat.

The comparisons to Wu-Tang Clan’s Ghostface Killah were immediate, as they should have been, for Bronson’s astonishingly intelligent word play, towering persona (that belies his miniscule height), and voice are all evocative of the legendary emcee. All hackneyed comparisons aside, Bronson’s intensely introspective, cerebral and at times, downright comedic verses stand alone in terms of their ability to distinguish the fledgling emcee as a visionary on the cusp of an artistic breakthrough.

His output has been nothing short of prolific, as he has released five collaborative LPs to go along with three mixtapes over a span of only two years, each one showcasing remarkable growth in terms of Bronson’s ability not just to develop his frenetically-paced flow, but to also synthesize vivid imagery and tell stories that are sincere as well as amusing. Bronson took to the carpet after a slight delay, fully-armed with two massive joints, one of which he was puffing freely, as he immediately announced his presence by jumping on a beat.

In spite of Bronson’s substantially heft for a man of his stature, he nonetheless showed a remarkable ability to use every end of the venue to his advantage, hyping up the crowd as he made a circuit from one part of the club to the next, even making the initial break in an ongoing pool game while he rapped on the microphone. Bronson tore through some of the strongest compositions in his repertoire, dropping his tracks “Larry Csonka,” “Imported Goods,” and “Barry Horowitz,” while shouting out his Albanian brothers during intermissions – it seemed as though the only air Bronson needed was what he drew from his joint, as he only got better as the set went on.

The high point came during his rendition of “Bird on a Wire,” featuring Riff Raff, as he flexed the same sort of poise evocative of his up tempo tracks on a slow, building backbeat – there is no pace at which he cannot shine. After playing for a little over an hour, Bronson slowly dropped down the pacing, rapping a capella on the last song of his performance, letting it fade away gently as the DJ took over.

Action Bronson affirmed through the strength of his performance, that while he may embrace many of the conventions that have marked the careers of other stoner rappers such as Curren$y or breakout sensation, Wiz Khalifa – he stands firmly apart in terms of charisma, the candor of his lyricism and his willingness to openly embrace his fans mid performance. He does this for his fans and for the love of the game, and it shines through when he takes stage.

One Response to “Review: Action Bronson at Bardot 6/28”

i wanna thank you guys for using my video as the feature for this article… means alot!! never had anyone use my work for anything before… much appreciated!!!

Leave a Reply to PJ