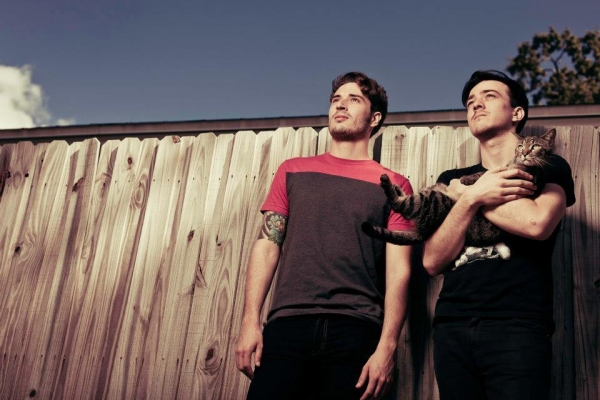 Got plans for this Saturday? Well if you do, cancel them, if you don’t- well, you’re welcome. This Saturday night, Miami’s favorite duo, Deaf Poets, will be making some ruckus at Churchill’s Pub celebrating the release of their first 7′, “This Pain”. They just came back from a short tour in Chicago, so we caught up with the two and discussed touring, the new record, and the South Florida scene.

First off, how did it feel to have been listed one of Paste Magazine’s top 10 Bands of South Florida to Look Out For?

Nico: It was definitely a humbling experience. We feel honored to be part of such a list, specially sharing it with some of our friends and fellow performers. It came to a complete surprise to us.

What made you decide to be a two piece rather than a fuller band? How has the decision hurt or helped you, and is there any possibility for the addition of new members?

Nico: We decided to be a two piece because we grew tired of depending on other people to play. We were part of bigger bands and they were too many issues regarding everyone’s schedule and priorities. It has definitely helped us. Sean and I have known each other for a decade and our taste is very similar. We are best friends so we never argue or anything. We are always open with the idea of performing with more people but not necessarily implement and new member.

You just got back from playing some shows in Chicago, how was that experience different than playing in South Florida? Any feedback that you’ll be taking back with you?

Sean: It’s very different. Besides the fact that people respond a little better to rock music the underground scene is much bigger. Feedback would be plain and simple, make sure we only come during bearable weather and that Chicago people in general love to party.

It appears that you have a good fan in Lolo Reskin (of Sweat Records/ indie label Sutro) who has hosted many of the events you’ve played, including Sweatstock. How did your connection with her and Sweat Records come about, and how do you think it has affected your position in South Florida’s music scene?

Sean: Lolo was always responsible for anything cool that happened in Miami so naturally we had to be a part of that. Without her help, persistence and time we definitely would have not had half the opportunities seen in the past year. I think were bigger fans of her though!

You seem to be pretty concrete and comfortable as a live band, and you even landed a spot playing alongside Bruise Cruise bands such as Fucked Up and The Togas. When it comes to performing, who do you draw your inspiration from, and which gigs have been your favorites thus far?

Nico: I dont know I gain my inspiration when I perform. I usually feel the crowd and the music, that usually dictates my mood.

Speaking of gigs, your “This Pain” 7″ release party is this Saturday at Churchills. For your first official vinyl, how did recording go for you, and what are some things fans can expect from the release?

Sean: Recordings were produced, recorded, and mixed through Patrice Kramer who is known for his work on Famous French Music Show Taratata. Its been a very smooth fun and growing recording experience and we look forward to doing the same for our upcoming full-length album. This Saturday is a relatively rare thing to happen. Miami’s so small and a local rock show doesn’t happen often. We have our talented friends from North&South a visually and life changing post-rock band opening the show, Crazy Latin rockers Arboles Libres a very well known band in FL scene, then Nico and I finishing the show. Bushmill’s Whiskey will be giving complimentary drinks and Saturday will be one of your only chances to grab our first limited edition record of which 100 will be translucent gold. Our performance is only going to be featuring just us and were throwing some new songs of which will be featured on the record and some originals from the past. Know that Saturday you take on the responsibility of coming home late and exhausted. You come to support the growing music scene, two amazing opening bands North&South, Arboles Libres who rarely perform, Bushmill’s Whiskey, and your doing all this for the price of 7 dollars. Pay $10 at the door and you get a copy of our record including entry. Sound good? See you there then!

[...] couples with a slick sound of hurried blues aesthetics. You might remember when they answered some questions for us back in June, which was around the time of their “This Pain” release, a popular 7’ [...]