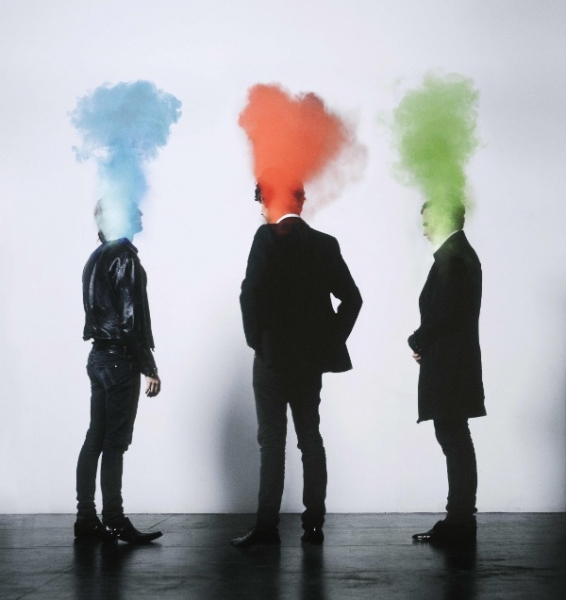 Rife with pulsating bass, playing off of warbled guitars, and vibrantly distorted electronic noise, one could readily mistake Australian Electro Pop outfit, Art vs. Science, for a band of many as opposed to a remarkably skilled three-piece, helmed by Jim Finn on bass, keys and vocals; Dan Mac on guitar, keys and vocals; and Dan Williams handling drums and vocals. Perhaps the most impressive aspect of the trio is their insistence on continually remaining true to their roots as a band that firmly adheres to laying down all of their instrumentation live, as opposed to relying on synthesizers, computers and the element of automation that accompanies them. Every instrument is played in studio in precisely the same way it would be on stage, with the Electronic sounds in particular being generated by connecting the keys directly into a guitar amplifier, then adding the percussion as the back beat. The energy that permeates their music draws heavily from their debauched, off-the-wall performances, which have garnered them much in the way of notoriety in their native Australia. Their independently-released 2010 EP, Magic Fountain, netted three ARIA nominations (the Australian equivalent to a Grammy award).

The subsequent debut full-length release, which dropped in 2011, entitled The Experiment, met with even greater success debuting at number 2 in sales on the ARIA music charts, in addition to attaining the accolade of “Best Independent Release” at the 2012 ARIA Awards – a resounding testament to their ability to resonate with critics, as well as commercial audiences alike. With the release of their sophomore self-titled LP, the band hopes to translate their success down under to North America – embarking on a tour of Canada and the United States, with festival dates at Bonnaroo in Tennessee and Governor’s Ball in New York. The band clearly draws inspiration from electro and dance punk, eschewing The Rapture by way of Justice, albeit without the latter’s reliance on digitized instrumentation. In anticipation of their upcoming performance at Bardot on Thursday, we took the time to sit down and get to know Art vs. Science a little better.

So it is my understanding that you guys go way back, having met in high school. How did it come about that you decided to play in a band together?

Dan Mac: We had our own separate hero-worshipping with bands like Rage Against the Machine, Nirvana and Blink 182 and Metallica. And I think we all looked at those people performing in front of all those other people and just thought ‘I want to do that’. We started a punk band for a school band competition and got to the finals to play one of Jim’s first songs – a rollicking ditty about drinking too much tequila and eating the worm and making a fool out of oneself. I think the same year I was in another band playing heavy / nu metal stuff about being a teenager and angry at the world because it wasn’t faaaair. After high school we kept playing and the themes became more about how terrible we were at picking up chicks. And then about how cool and rock star we were (which we weren’t). And now we’re part monk / part robot / part sci-fi villain and sing about imaginary things with a fun twist.

The live aspect of your music is clearly something that plays a pivotal role in your music and in your sound. How do you approach the recording process in a way that really makes it in any way distinguishable from what you already do on stage?

Dan Mac: Well recording’s kinda different from stage because the end result isn’t a giant PA – it’s headphones or laptop speakers. And you don’t have a big crowd to play to / be part of because it’s more often than not someone on their own going for a jog or maybe it  might be played at a party or something. In that respect the drum sounds are going to be not quite so hi-fi and clear and crisp and boomy – you want them a bit grittier and vibing to replicate the fact that normally when you hear them live they’re at like 105dB blasting your ear holes out.
Apart from that, and some fun ‘album’ moments and atmospherics, we don’t try to distinguish how we play live from how we record. For the most part we don’t do click tracks, which is a bit of a bummer in that our music isn’t as DJ friendly as it could be. But it’s all about the feel! We also set up all the keyboards and drums in the same room so we can look at each other lovingly, and go for a really vibing take. It’s probably different from the way most dance music is created via programming it into the computer and quantising everything… I think it’s the rock in us. It’s best if things are a bit shit so you can actually imagine the people playing them.

You strive to replicate that same sort of distorted yet frenetic energy prevalent in electro on your tracks, and you remain ardent in your conviction against using any sort of digitized equipment in generating that sound. Why do you avoid adding any sort of computerized element to the tracks, and do you find that it limits what you can do in terms of innovating?

Dan Mac: Well… it was just the way we started really! Technically our keyboards are digital but they’re all old and cheap and sound like a bucket of crap when you hear them plugged directly into a PA or computer. But when you hook them up to a Mesa Boogie or a Marshall stack the amps add all that character that’s missing from digital equipment. Plus you get that classic rock combination of voices: two big guitar amps plus an Ampeg bass rig. It’s tried and tested but we just plug shitty keyboards into them instead of electric guitars.

But we’re not against adding new electronic stuff – we saw Little Dragon play at Bonnaroo fest and they were awesome. And I don’t think they had click tracks but they did have a lot of electronic pads and things. That’s something I think we could use. So long as there’s no click tracks and everything the audience hears is from someone hitting a key or a pad at that point in time, we’re happy with that.

You’ve recently garnered much in the way of success back home in Australia. How have you taken the surge of fanfare that has started to gravitate towards your music, and how do you insulate yourself from it from a creative standpoint?

Dan Mac: That is an excellent question! I’m not too sure really. Part of our schtick is that we don’t place ourselves as central characters in the Art vs Science “world” of lyrics and video clips. We like being the background instigators / observers. Playing live is different of course, in which case we’re each massive attention hogs “look at me! look at me!” and I’m probably the worst. But we have a fairly solid core of stuff we want to sing about which is a mixture of party fun times / sci fi / and esoteric so our moderate success hasn’t affected that yet. We definitely like to think about the music as a soundtrack to some sort of story, and the story must interest us! More often than not this is really geeky stuff about robots and quantum mechanics and black holes and consciousness…

But I think we might be moving into some more emotional territory for the next album. We don’t like singing about problems to which we know the solution, which I feel too many relationship songs do sometimes. But what we have with each other is so important, and so much happens that it’s something I personally would like to cover – maybe from an outsider’s perspective. Personally I don’t like to dwell on things, having been through that phase in my life. I try to think: we’ve all been through hard times – sometimes you just have to go “ok, that sucked, move on”! But sometimes people can’t do that, and it’d be nice to make something which recognises that and can help in some way.

Where did you draw the inspiration for the sound you’ve been developing on the past few releases, and how does the new self-titled LP really build on that?

Dan Mac: Way, way back when I first heard Justice’s Cross – that changed my life! The sounds they use on it – super tight, gated snare / white noise, and thick booming kick sucking the bass sounds – ah the bass sounds! That was a huge influence for us. We always cite Justice and Daft Punk without even thinking about it now, but Justice was a massive influence. I think they put their synths through a bunch of overdrive pedals or amplifiers or something like that, and replicating their sound was one of the first things we ever did, even before Art vs Science had a name. Plugging a Yamaha PSR-27 into a Mesa Boogie stack. Then we bought these HP/LP filter clones from the Korg MS-20 (sorry if I’m geeking out a little here! It’s what I love) which brought our sound closer to stereotypical dance things; low pass sweeps etc.

The new LP builds on this I think adding some more eclectic influences like Talking Heads and Devo, and maybe there’s a hint of the Kraftwerk kookiness of which I’m a big fan. Beastie boys of course we love. It was really sad to see MCA go, but he made some killer tunes in his time and I think he’d be proud of the effect that had on so many people.

For those who aren’t too familiar with Art vs. Science live, what they can they expect to see in a live performance from you guys?

Catch them tonight at Bardot